The Baltimore Orioles, led by their owner Peter Angelos, made a bid at international diplomacy in 1999. After a large push by Angelos, Major League Baseball and the Cuban government (along with a little help from the State Department, I'm sure) agreed to play a home-and-home series between the Cuban national team and Angelos' Orioles at the start of the season.

The first game was played in Havana in March before a roaring crowd of 50,000-plus. Angelos was joined in the front row behind home plate at Estadio Latinoamericano with MLB Commissioner Bud Selig and Cuban leader Fidel Castro. After the home team tied it up in the bottom of the 8th, the crowd was treated to a 3-2 Baltimore victory when an 11th-inning single from Harold Baines scored Will Clark from second. It was a thrilling but, ultimately, predictable game.

Five weeks later, the teams met again, this time at Camden Yards. It was a rainy night and the O's were sporting the worst record in the American League at 7-17, but over 40,000 people still packed the park for Cuba's first-ever game against a major league opponent in the United States. Judging by reactions to the game in the following days, the phrase "major league opponent" was merely a technicality.

Making the start that night was Scott Kamieniecki, who had been on the disabled list for two months and who hadn't actually played in a big league game since the previous August (he would make his 1999 regular season debut the following week). Also in the starting lineup was Calvin Pickering, the 284-pound first baseman who had been called up the night before and who had all of nine games in the majors to his name. The rest of the lineup was filled with Baltimore's normal starters, save for Cal Ripken, who was on the disabled list at the time. It didn't matter, though. 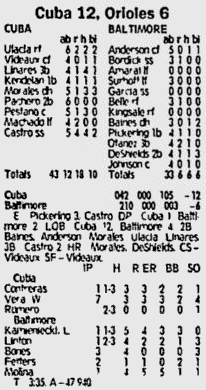 Here's what various news articles had to say in the days following Cuba's 12-6 victory.

From Ben Walker of the Associated Press:

The Orioles, whose AL-worst 7-17 record belies their payroll of more than $78 million, were outplayed by a team whose players make a total of about $2,250.

"It was very apparent they wanted it much more than we did," Orioles manager Ray Miller said.

With Mike Mussina, Scott Erickson, Juan Guzman and Sidney Ponson left off the roster, all that stood between the Orioles and humiliation were Doug Linton, Molina, Mike Fetters and Ricky Bones.

In retrospect, the Orioles' upper management made a stunning mistake. They scheduled a game with large political repercussions and media coverage. They used their starting lineup, thus putting their reputation on the line. Yet the Orioles ended up not using any of their seven best pitchers, including their top three relievers. That logical inconsistency violated simple common sense: Do it right or don't do it. In the wake of their almost farcical showing, they'll pay a price in shame.

Already buried in the American League standings with a 7-17 record, the Orioles had promised to treat this exhibition game as anything but. In the end, they could not respond to one more challenge.

"I'm very embarrassed," Orioles reliever Mike Fetters said. "We were representing the United States, Major League Baseball, our friends and family. We were trying, but they took it to us in our house. That's the most embarrassing thing."

And more from the Washington Post, this time from Dave Sheinin:

And by the time the debacle was over, the Orioles were willing to admit as much.

"We didn't want to play today," said Orioles center fielder Brady Anderson. "We would have preferred the day off."

Asked what he might have done with his off-day had it not been wiped out by the exhibition game, Orioles closer Mike Timlin said: "Hmmmm. Probably watching a movie, just spending time with my family."
…
"I didn't want to be here," reliever Mike Fetters said. "But when they called my name, I was ready. I didn't want to embarrass myself. . . . I'm very embarrassed. We're representing the U.S., Major League Baseball, our friends and family. {The Cubans} took it to us in our house. That's the most embarrassing thing."

From Joe Strauss at The Sun:

"I've seen it before. That's how they play," said left fielder B. J. Surhoff. "It's not exactly our style. I don't think anybody appreciates the guy running around like an idiot. But what are you going to do? They were excited to win."

A few days later, the Plain Dealer printed this quote:

"To get beat like that, it was embarrassing," Yankee closer Mariano Rivera told New York reporters. "I don't know why they even agreed to the game. I saw Albert Belle standing there, taking pitches. That's not him. You could tell the Orioles weren't interested."

At one point in the game, Belle watched 11 straight pitches go by without swinging. It was the Baltimore Sun's Ken Rosenthal who had the best quotes about the game.

David Cone and Mariano Rivera were so disturbed, they told The Record of Hackensack, N.J., that the Orioles' performance damaged the image of Major League Baseball.
…
Still, B.J. Surhoff did not take exception to the Yankees' remarks.

"I said after the game that people are going to have their opinions about the game. They're entitled to them. We played horrible," Surhoff said.

"I was embarrassed by the way we played—of course I was," he said. "I never want to walk off the field having gotten my butt kicked."
…
Cone reportedly was so disappointed by the Orioles' effort, he said the Yankees would like the next shot at the Cubans, asking reporters to "tell George (Steinbrenner) to schedule it."

"I would try to win that game as hard as any game I've ever played in," Cone said. "I would love to pitch against them."

"They probably think they're better than us," Martinez said. "I mean, we obviously have better teams and better players. But right now, they've got to be thinking they can play at our level." 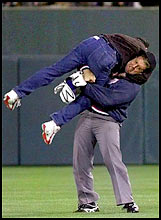 The game was not without its moments, though. They just happened to all come for Cuba. In the middle innings, for example, protesters twice ran onto the field. One of them ran too close to Cuban umpire Cesar Valdez, who "body-slammed and punched" the protester.

They tangled briefly, then Valdez lifted the fan over his head and threw him down to the ground hard. Valdez began swinging, and landed a few blows to the man's head, before Orioles left fielder B.J. Surhoff rushed in and pulled Valdez off.

"He wanted to go back and hit the guy some more," Surhoff said. "I tried not to let that happen." 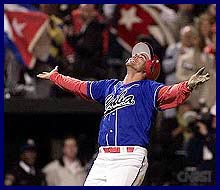 The lasting image of the game came late in the contest, nearly five hours after the game began (thanks to a 56-minute rain delay in the first inning). Capping off a five-run ninth inning, Andy Morales poked a ball over the center field wall for a home run. His trot was a sight to behold, arms raised over his head, kisses being blown to the Cuban fans near the dugout—the exact look of joy you always imagined you'd have after hitting your first big league home run but that you never actually see from professional ball players. He knew he would only ever get one chance at this and he celebrated appropriately.

You can see the trot at about 1:20 into this video:

A year later, Morales would defect to the United States, eventually playing minor league ball for the Yankees and Red Sox. He wasn't the only Cuban star from that night to make it to the States. Jose Contreras, who would defect to the US in 2002, got the.start for Cuba that night in Baltimore after also starting the contest in Havana.

It's been 14 years now since the Cuba/Baltimore series and the international landscape in baseball has changed some. Japanese star Ichiro Suzuki won the MVP and Rookie of the Year awards only two years later and we are now into the third World Baseball Classic. As baseball expands around the world, it can only mean good things for Major League Baseball. This may not be what Peter Angelos had in mind when he fought for two games against Cuba in 1999, but they did serve as a small taste of what was to come.

You need to be logged in to comment. Login or Subscribe
lgranillo
For the record, Morales' trot - assuming the video above is full length (and I think it is, weird camera cuts aside) - was 22.48 seconds. Considering his excitement and all the theatrics, including his final few walking steps onto the plate, that's a pretty nice sprint.
Reply to lgranillo
bobbygrace
"The rest of the lineup was filled with Baltimore's normal starters, save for Cal Ripken, who was on the disabled list at the time."

Good one.
Reply to bobbygrace
matthewverygood
I had no idea this happened. Thanks for the report.
Reply to matthewverygood
comish4lif
I was at that game. It was a fun night, even if the O's lost.
Reply to comish4lif
jdeich
This should be a recurring event that rotates among MLB's teams. We've agreed to multiple Olympic tournaments (including the 2000 Games, with a US/Cuba final) and the WBC, and no one's head exploded.
Reply to jdeich