Last night—and well into this morning—Mexico's Yaquis de Ciudad Obregón and Dominican Republic's Leones de Escogido battled in the championship game of the Caribbean Series. Los Yaquis defeated Los Leones, 4-3,to take the crown for the second time in three years. The game lasted seven hours and 18 innings and was only won when Mexico's Douglas Clark hit a home run over the right field fence in the top of the 18th.

For those who missed the Series, Craig Robinson and Eric Nusbaum have been chronicling the revelry over at Sports on Earth. This passage from the final report describes what we all missed:

But it is also a reflection of the atmosphere in Hermosillo, which even now hardly feels like it could have been real. Hermosillo is a city where even ordinary fans can show up to every day of a seven-day baseball tournament in a different version of their favorite team's jersey; where mixing and matching major league hats with Mexican team shirts is not strange, because the thing people are rooting for most is baseball itself; where people drive ten hours from Estado Chihuahua in snakeskin cowboy boots just to watch a single game.

Sadly, the highlights from this epic game are nowhere to be found online. Thankfully, though, ESPN has the entire broadcast archived for free. You can find it here (at least for now).

While we're watching the game, how about some tater trots? 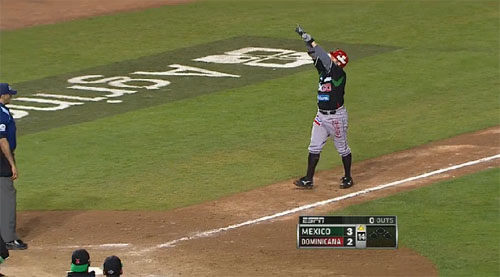 Ricardo Nanita, los Leones – 23.75 secs.*
The first home run of the night for either team came in the bottom of the ninth inning. With Mexico leading 2-1, it looked like the Series might be over at any minute. On the fourth pitch of the inning, Nanita took the offering from Luis Ayala over the right field wall. Nanita rounded the bases with his arms held wide, clearly excited that his country had new life in the Series. A very slight break in the satellite signal as Nanita rounded first may have slowed the trot's time, but not by much.

With the game still tied at two in the top of the 14th, Garcia took the first pitch of the inning from Jailen Peguero over the center field wall. This was a blast. Garcia seemed to pause at the plate, as if wondering where it might land. When the ball finally cleared the fence six seconds later, Garcia and the rest of the crowd acted as if the Yaquis had just won the game. It took Garcia nine seconds to get to first, his arms raised. Things slowed considerably on the home stretch. Roughly 60 feet from the plate, Garcia slowed into a deliberate walk, hands pointed towards the sky and into the crowd. He even seemed to take an extra step in the batter's box before finally touching home plate. If you thought David Ortiz was slow heading into home plate, Garcia's 14th-inning blast will teach you otherwise.

What makes this tough is that there seems to be a bit of a satellite delay during Garcia's trot. No matter how many times I watch the video, somewhere between second and third, the video pauses. I've done my best to time the pause so I can adjust Garcia's trot time correctly, but it's very difficult to be precise. The delay seems to be 1-1.5 seconds in length. That makes Garcia's trot potentially as "fast" as 30.8 seconds, but with the imprecise length of the video pause and the possibility that the video resumed with Garcia a few steps farther down the baseline than when the pause began, I can't say for sure. If this were the official Tater Trot Tracker, Garcia's time would be inadmissible, but it's too fun to ignore today.

However you slice it, Garcia was monstrously slow around the bases. (For a list of other 30-second trots, see this post on Bobby Abreu's final(?) home run.)

Douglas Clark, los Yaquis – 21.24 secs.
The game-winner. The 18th-inning shot also went over the right field wall, barely clearing the fence by a foot or so. Though Clark appeared to be as excited for his extra-inning, go-ahead home run as Garcia was for his, he held it back a bit better. He held his arms out in celebration well past first base and sprinted home the rest of the way. Coming into the plate, Clark pulled his hands and his jersey up to his mouth as if he were kissing it while also crouching down in his final steps. It was as if he was saying a prayer as he trotted past the plate. A few teammates came out to greet him on the grass, but even his Yaquis teammates held back from celebrating like they did for Garcia.

Don't worry, though. I'm sure they celebrated plenty once the game was over.

You need to be logged in to comment. Login or Subscribe
LlarryA
Karim Garcia?!? Really?!? Wow. I remember his time here in Arizona with no great fondness... I guess it's great that he's found a way to still be playing...
Reply to LlarryA