Here’s part 2: the best of the baseball team cookbooks. 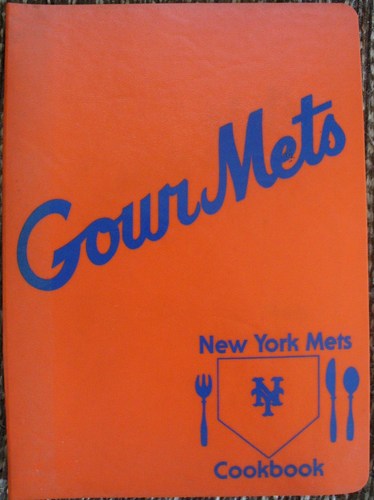 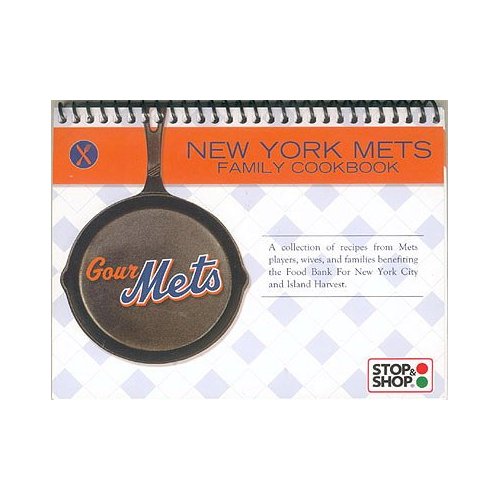 In 1980, Doubleday and Company purchased the Mets. In 1982, the publishing giant issued what would go on to be its most important book: GourMets: The New York Mets Cookbook. Edited by Randye J. Ringler—between porn-film appearances, one assumes based strictly on the name—for the Lady Met Club, it included recipes from many Mets “greats,” and was updated in 1983 to include recipes from the recently re-acquired Tom Seaver and others. 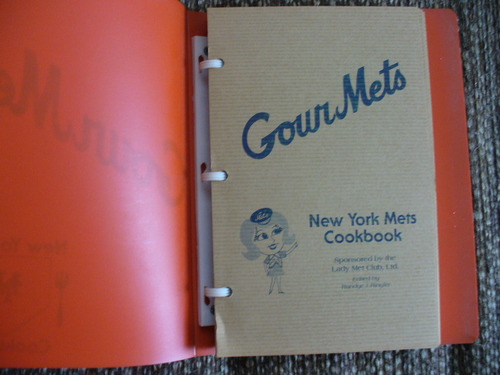 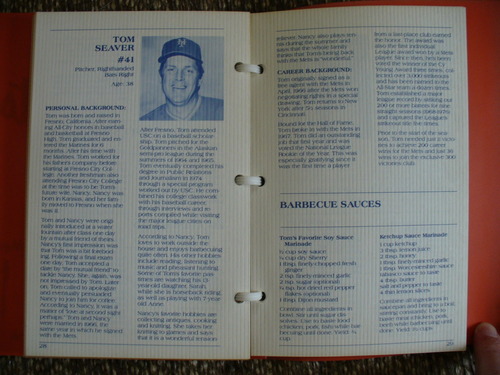 It’s hard for me to be objective about GourMets. I grew up a Mets fan, and Seaver was easily my favorite player. Something about that brash combination of Dodger blue and Giant orange just speaks to me, and the title font on the cover is like some crazy outsider art sign you’d find along a desolate stretch of highway. Counterpoint: the home plate silverware place setting is inexcusable, and inexplicably large relative to the title. The Lady Met Club giveth, and the Lady Met Club taketh away.

I came across this post by a food blogger named Makiko that details some of the book’s contents and even offers feedback on a few of the recipes. Like Makiko, I had no recollection of Ron Gardenhire playing for the Mets, nor did I realize that Sue Hernandez, wife of Keith, hated vegans so much. I mean, just look at that Beef and Broccoli Pie recipe: eight ingredients, and six of them are vegan-unfriendly. I see how it is, Sue. On the other hand, I’m thinking hard about how to veganize Darryl Strawberry’s mom’s 7-Up Cake. Maybe add some actual strawberries in homage? BRB, gonna try this.

The book was resurrected in 2007 as  GourMETS: New York Mets Family Cookbook. According to this article, the cookbook, produced in partnership with supermarket chain Stop & Shop, sold out of its 5,000-copy printing, and the Mets donated $60,000 in proceeds to area food banks. Nice work, Mr. (and Mrs.) Met. High fives all around.

5. Atlanta Braves at the Plate (1989) and From Home Plate to Home Cooking: A Collection of Recipes from the Kitchen of the Atlanta Braves Family (various) 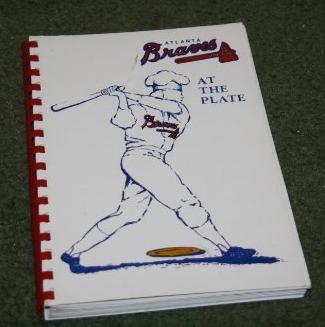 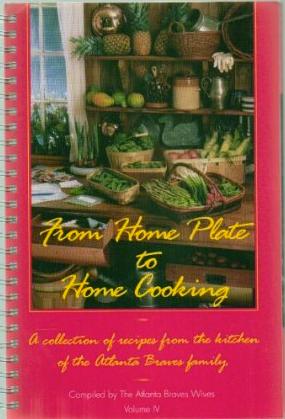 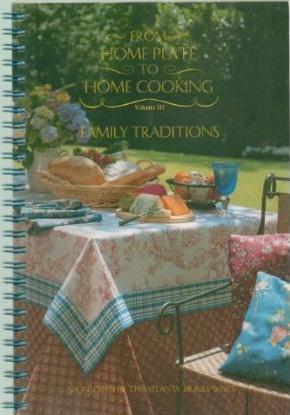 In 1989, the Braves issued “Atlanta Braves at the Plate.” Is it strange to anyone else that Stan Kasten and Ted Turner receive top billing alongside Hank Aaron? Hang on, I just looked at the team’s record for the previous year and no, it’s not surprising. The club lost 106 games, so I probably would’ve billed the assistant head groundskeeper over Ozzie Virgil.

The thing that makes At the Plate so compelling is Hank (or Billye) Aaron’s contribution: something called “CHICKEN Hmmmmmm.” 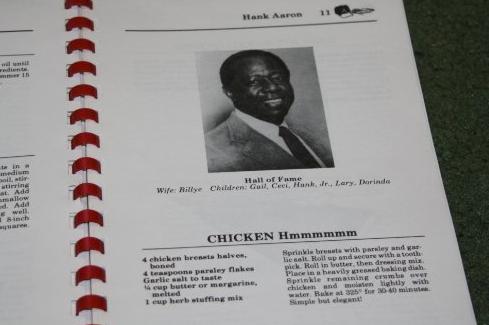 Nothing in the recipe gives us any insight into the dish’s odd name. There’s also no punctuation, so it’s not “CHICKEN, Hmmmmmm?” Might Hank or Billye have been dictating the recipe and said “chicken mmmmmmm!” and the stenographer mistakenly typed “Hmmmmm”? The world may never know.

The cover makes similar design mistakes as many other books in this series, notably substituting a dinner plate for home plate and replacing the player’s baseball cap with a chef’s hat. Also, one wonders how well he is able to hit without eyeballs.

But as primitive as that cover is, it’s light years better than those that adorn the From Home Plate to Home Cooking series. These covers lack any Braves branding, and instead look like something Laura Ashley might have vomited. People: no one is buying these for the recipes, and you can’t possibly compete with real cookbooks. Soft-focus photos of idyllic meal scenes are not the way to go. Don’t bury the lede. Brand this as a Braves thing and stick a picture of a baseball on it. End of rant. 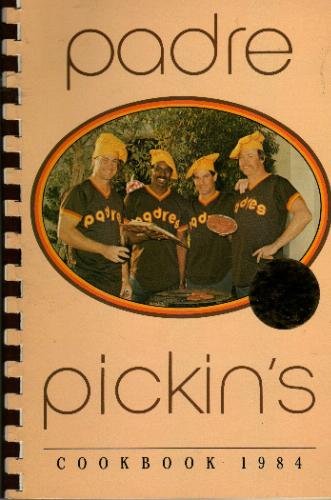 We don’t have a whole lot of evidence on which to judge Padre Pickin’s, but when the cover is this strong, we don’t need much. This is as near perfect a cover as one could hope for: the title uses a font similar enough to the official logo font, and the photo features four players and their culinary creations. The photo is even framed in the official team colors. Magnifique, Mr. or Ms. mid-1980s Graphic Designer Person.

Also, courtesy of this blog post comes a great image from the book, which I’ve dubbed “the flippin’ friar”: 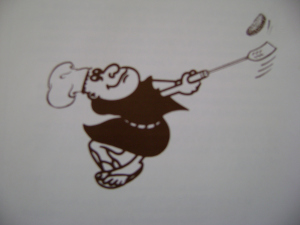 Also per that post, we find that the “Pickin’s" included both a “Parents Prayer” and a “Cookbook Prayer.” I can’t even imagine what the latter might be, but I’m sorely tempted to spend six bucks and find out. 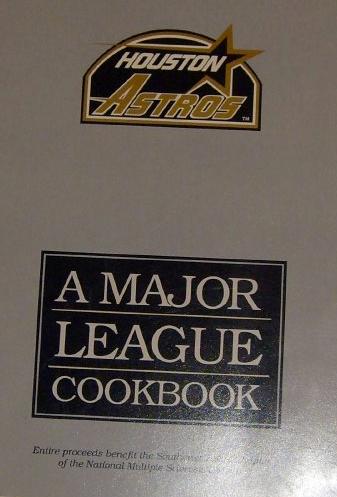 You think the 1994 version is bad —an unremarkable logo and an uninspired cover design—until you see the 2004 cover. The cover of From Home Plate to Your Plate has been systematically scrubbed from the Internet; I found only a single example of the cover in an obscure and dusty corner of the web. And it’s genuinely awful.

Everything it could have done wrong, it did. Literally the worst font ever. The home plate place setting trope. No mention of the Astros! But that horrendous cover belies the wonderful content within.

Lori Franklin’s review of the book in Texas Monthly is, in a word, amazing. I’d like to quote my favorite parts, but literally the entire thing is my favorite part. “Did you know that catcher Brad Ausmus favors P.F. Chang's China Bistro or that owner Drayton McLane Jr. dislikes fried chicken?” Well, ya do now. Seriously, take three minutes and read that article, which has been preserved through the miracle of archive.org. Priceless. There’s even a video.

And when you’re done there, maybe go back to the ‘94 book and check out Craig and Patty Biggio’s recipe for Linguine with Basil Sauce. Because “pesto” is way too ethnic! 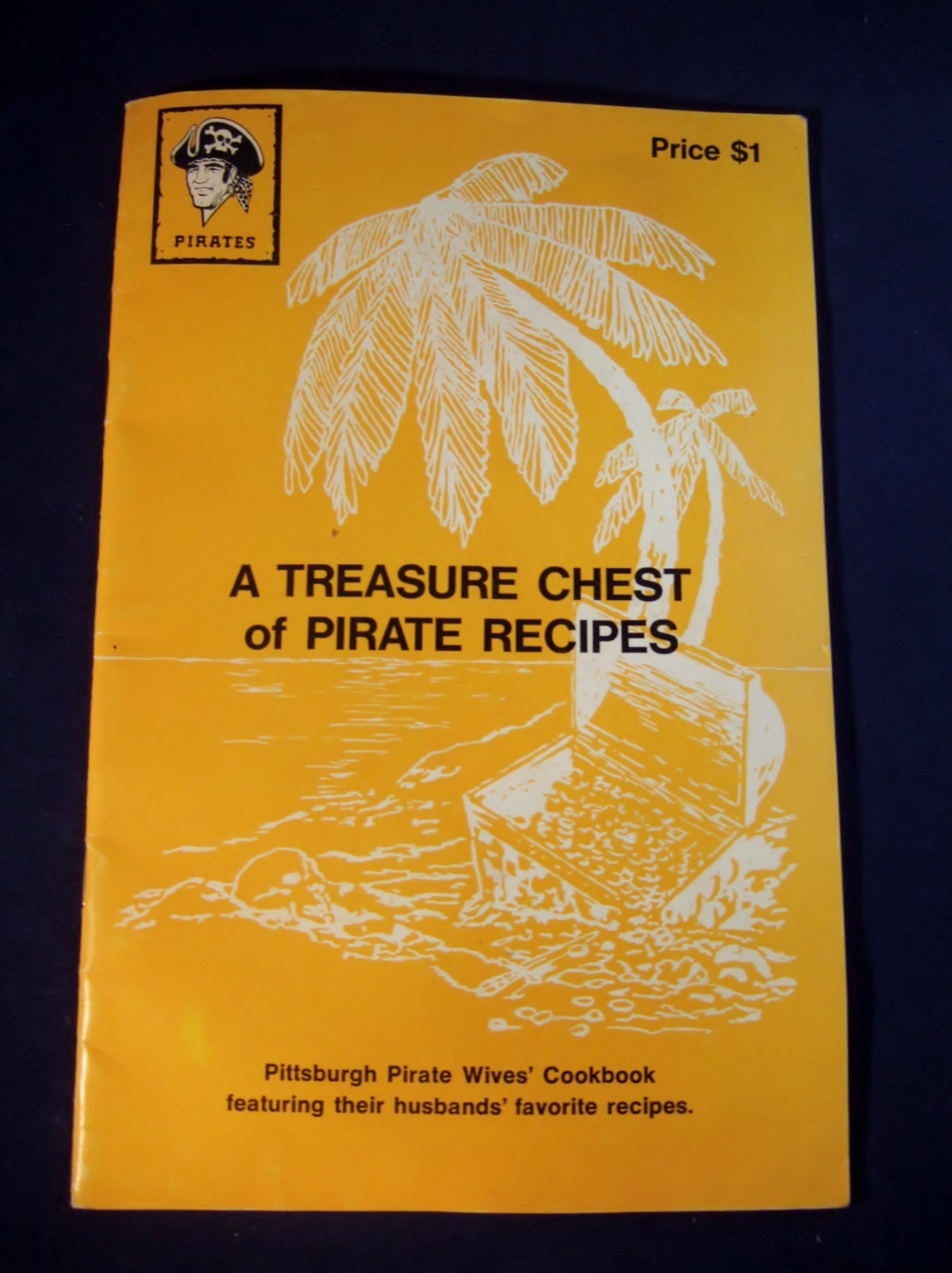 This saddle-stapled booklet originally sold for just a buck. It didn’t try to do too much; it didn’t overreach. It featured a simple cover design adorned with one of the most canonical and enduring logos of all time: the classic pirate’s head. It’s a league average book with an extremely good face. But this entry plays way up based on the inclusion of a single recipe: Vera Clemente’s Arroz y Habichuelas. 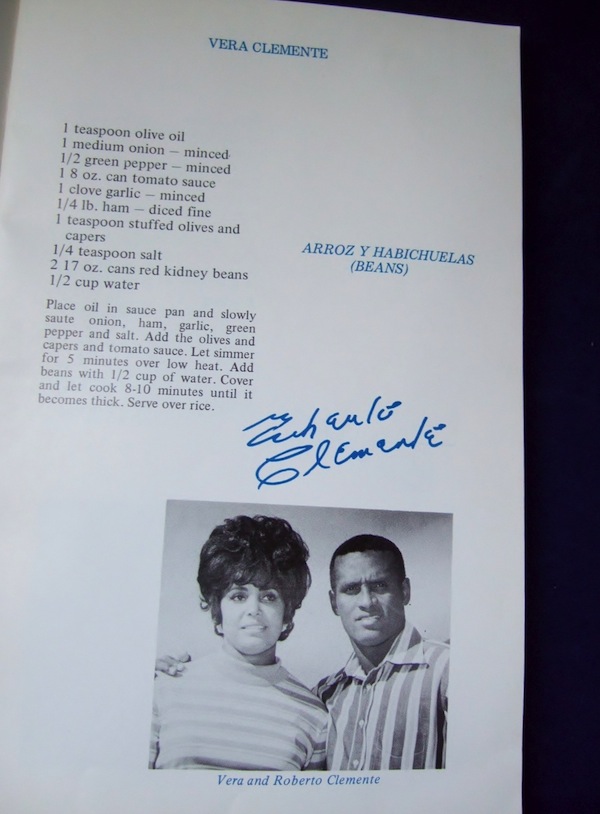 First of all, there’s the translation (or lack thereof) of the title. Apparently whoever compiled this cookbook couldn’t be bothered to figure out what “arroz” meant, and instead of entitling this one “Rice and Beans” —a staple in Puerto Rico—they called this one “Beans.”

Next up, the photo. Roberto and Vera look like SUPER BAD ASSES. Vera is stunning—look at her hair!—and Roberto has that lean and hungry look that he has in nearly every photo: all business, not suffering fools gladly, or however you prefer to describe it. Basically, “Take the picture, pendejo, I’ve got business to handle.”

Lastly, there’s the recipe itself. Canned beans, and Vera only mentions the “arroz” as an afterthought? Clearly she didn’t suffer fools gladly either. 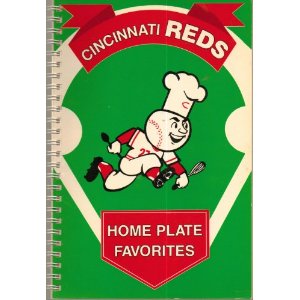 The moment I saw Home Plate Favorites, I knew I’d found the winner of this series. The cover is perfection: the classic Mr. Red, the Running Man, sporting a be-logo’d chef’s hat and clutching a spoon and a whisk with a wild look in his eye, dashing off to cook something, anything. Pay no mind to the misshapen home plate, or the fact that the baselines emanating therefrom do so at an acute angle. It’s got Mr. Red and a great big REDS banner. It tells you everything you need to know.

But as good as the cover is, it does nothing to prepare you for the wonders to be found inside. 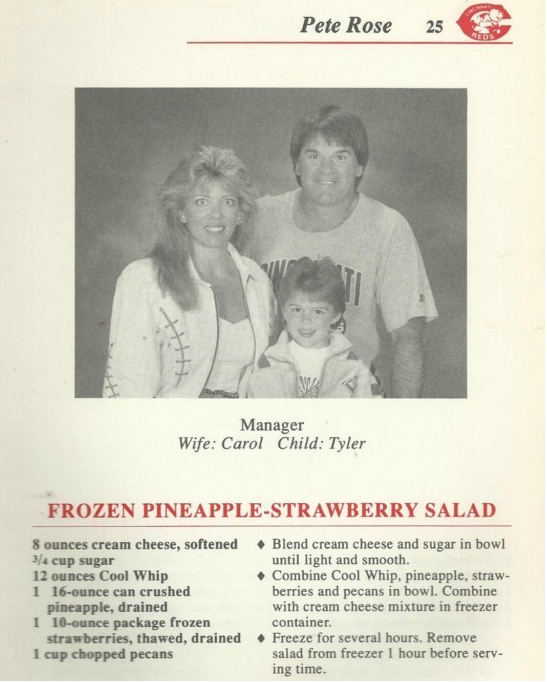 That’s the infamous Pete Rose. His then-wife Carol appears to be wearing a baseball-themed leather jacket; that’s stitching, right? Like his mom, son Tyler is rocking the legit ‘80s ‘do. I find myself transfixed by her saucer-eyed gaze.

A year or so after this photo was taken, Rose would submit to a lifetime ban from baseball. Carol would stay by his side for another 20 years; he would eventually divorce her in 2011. A year after that, Rose’s reality show, Hits & Mrs., would premiere.

But in 1988, Carol and Pete were still together. Perestroika was just underway in Russia. Pan Am flight 103 hadn’t yet been destroyed. Anything, everything was possible. And Carol gave us the gift of her Frozen Pineapple Strawberry Salad.

(Don’t forget to remove salad from the freezer one hour before serving time.)

You need to be logged in to comment. Login or Subscribe
NathanAderhold
That review by Lori Franklin is fantastic. Just the right amount of too many puns.

Reply to NathanAderhold
delorean
Your review of her review is perfect.
Reply to delorean
Vicmill1
OK, I know I may be somewhat biased, but this part 2 is the best part 2 of anything I have ever read. I laughed straight through and I could care less about most of the teams mentioned (except the Doubleday-owned franchise).

It is my opinion that Ted Turner may have asked Jane Fonda to design those two offending girly cookbooks.

12 ounces of Cool-Whip? I say let them both back into baseball.

I think there is a doctorate in studying major league sports teams' interfaces with the great unwashed, starting with the Fashion Show in "Slapshot" and moving along to these cookbooks and the executives who are dragooned into working with "les girls".
Reply to Vicmill1