Chris Carpenter made an amazing return from Thoracic Outlet Syndrome (TOS) surgery last year, but his 2013 season—and, potentially, his career—is now in jeopardy following a setback with his shoulder. Carpenter was throwing off the mound recently when his symptoms returned, this time worse than before. He is also experiencing numbness in his arm and bruising in his shoulder and hand. Carpenter informed Cardinals general manager John Mozeliak of the situation after trying to throw three different times without success. During their conversations, Carpenter expressed concern about how his shoulder will respond to life after baseball, let alone pitching at a high level.

Carpenter’s surgery was not an experimental one, but it’s not a common one, either. The area affected involves the neurovascular bundle as it passes from the neck and trunk through the shoulder and down the arm, as pictured in Figure 1.

TOS has a wide range of causes, including extra muscles in the neck, scar tissue in the area, an extra cervical rib, hypertrophy of normal musculature, tight scalene or pec minor muscles, or trauma such as car accidents. Microinstability in the shoulder might also play a role. Regardless of cause, the results can include decreased blood flow or nerve function, or both. You can see an example of decreased blood flow in an arteriogram (a special diagnostic test to look specifically at blood flow) of a collegiate baseball pitcher with TOS caused by pec minor tightness in Figure 2. The thin arrow represents the axillary artery being compressed by the tip of the corocoid process (thick arrow).

Carpenter underwent surgery last July to remove a portion of a rib along with some muscles that attach near the neurovascular bundle, which is explained in Figure 3. 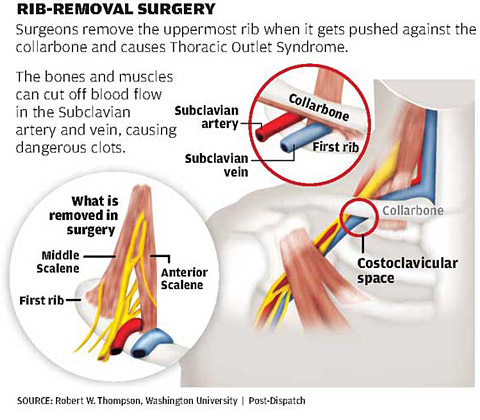 Most pitchers with this condition take the better part of a year to return to pitching at the major-league level, if at all, but Carpenter managed to return after only a few months. However, it was clear Carpenter wasn’t anywhere near his best. His velocity and control suffered, and we recently found out he had discomfort in his last start of the year. There was still optimism that the offseason would allow Carpenter to fully recover and slowly build up his strength again. Everything looked to be heading that way until he ramped up his training regimen.

Carpenter will undergo further tests and an examination by Dr. Gregory Pearl, the surgeon who performed Carpenter’s surgery last year, to find the cause of his trouble. The most likely culprit at this point is the pressure caused by the pec minor muscle, but sometimes the cause is never fully found.

You need to be logged in to comment. Login or Subscribe
onegameref
Do they take a look at Lohse now?
Reply to onegameref
BillJohnson
A quote from MLB beat reporter for the Cardinals, the excellent Jenifer Langosch, and her article on the subject:

"Any time we discuss free agents -- whether it is early in the free-agent market or now -- it's not something we publicly go about doing," Mozeliak said. "In terms of how we look at our staff right now, we do have confidence in what we have. If something makes sense for us and as a group, if we feel like it's in our best interest to consider, we may. But I don't want to get into specifically talking about one player today."

This is predictably vague, but the interesting thing about it is that it is something of a retreat from earlier statements that Mo had made, to the effect that they and Lohse had moved on. I'm not sure I would go so far as to say they're going to "take a look at Lohse," but he's no longer saying they've already had that look and decided mutually to pass.
Reply to BillJohnson
BillJohnson
Oops, should have been clearer: only the middle paragraph, not the last one, comes from Langosch. The last paragraph is my own read on the situation. Sorry, but I don't know the markup for embedding quotes in a comment.
Reply to BillJohnson