During the last game of the season, Stephen Vogt hit this ball

and was out. You might detect a little bit of extra awwwwwwww in his 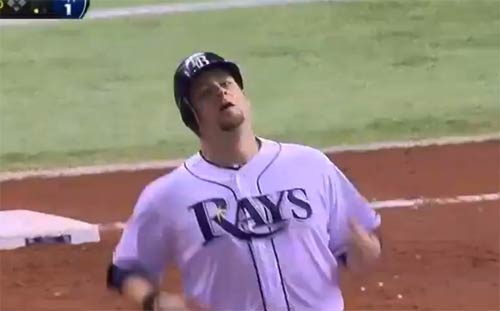 because this was Vogt's 23rd official at bat as a big leaguer and his 23rd out, and if that one isn't going to be a hit, well geez. The Rays broadcast happened to be interviewing Andrew Friedman at the time and Friedman noted that "The second hardest-hit ball off Craig Kimbrel this year was by Stephen Vogt. So he hasn’t had a lot of good luck." Presumably, Friedman chose to say "second-hardest" because he actually knows that it was exactly the second-hardest. He didn't say "hardest" or "one of the hardest," either of which might have just been vague superlatives; he was specific. Friedman said this, we might hypothesize, because he had looked at the HITf/x data and he knew it to be true. Slowly but surely, in in-game interviews with GMs, all HITf/x data is being made public!

So what of that ball that Vogt hit against Kimbrel? It ended the game on May 18, and it looked like this:

(It was particularly east to find that play because Stephen Vogt has, unsurprisingly, very few highlights on MLB.com. There's one of him throwing out a baserunner, one of him scoring on a teammate's hit, another of him flying out to center to end a game, and one of him hitting a triple in Spring Training. That last one confirms the physical possibilities, at least.)

It took about 2.55 seconds to reach Bourn's glove, and if that star is in the middle of the outfield it traveled around 260 feet (a guess?). Doesn't look like it was ever more than about 18 feet or so off the ground, though who could really tell: 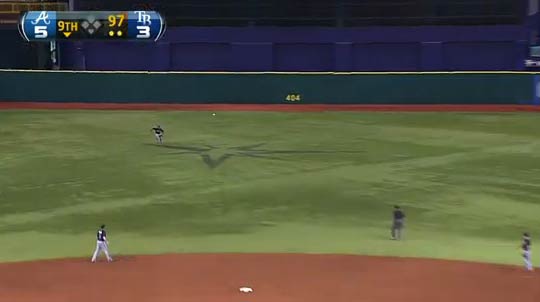 I'm not going to attempt to calculate the speed based on that information [update: see some of the math in the comments], but I will note that we have speed off the bat for home runs, and Kimbrel gave up a few of those. One went 110 mph. The next fastest was 106.7 mph, and the third went 104 mph. Since we know Vogt hit the second-hardest ball off Kimbrel, the very slowest Vogt's ball could have been was 106.8 mph. Rounding up to 107, that would put it as fast as the 80th percentile of all home runs hit in 2012, and that's just the slowest it could be; it's conceivably much faster, perhaps even faster than 110 mph. At 107, though, it would make it as fast off the bat as, for instance, this home run by Mike Trout, which traveled 421 feet in 4.6 seconds.

The cruelest thing about baseball is not just that hard-hit balls are often caught—and, notably, Vogt has struck out just two times in now 25 official hitless trips—but that they're often caught because of how hard they are hit. If Vogt had hit his ball off Kimbrel one mph slower, it would have fallen in for a hit. But he didn't, so it didn't. "Vogt trying to get his first hit hits the line drive into center," the Rays announcer said on the play. That was in May. Still trying.

Thanks to R.J. Anderson for pointing out every significant detail of this post

You need to be logged in to comment. Login or Subscribe
a-nathan
I'm a bit skeptical of the claim that this ball was hit very hard. I have a scenario whereby the ball travels 260 with a hang time of 2.55 sec and a maximum height of about 20 ft. The ball is hit with an initial speed of a modest 93 mph at a launch angle of 12 deg. A ball hit that hard at a more optimum launch angle of 30 deg, the ball would have traveled about 350 ft, which is not all that impressive. Had the ball been hit at 110 mph (which would be quite hard) at a launch angle of 6.5 deg, it would have traveled 260 ft in 2.05 sec, reaching a maximum height of about 12 ft. What seems to rule out such a high batted ball speed is the 2.55 sec hang time.
Reply to a-nathan
lyricalkiller
Aw, bummer.
Reply to lyricalkiller
a-nathan
Sam...don't give up so easily. How did you estimate the hang time?
Reply to a-nathan