Babe Ruth died in August 1948 at the age of 53. The following spring "Babe Ruth Sports Comics" was released to a nation full of comics-loving children. The magazine promised to to be "an all-sports magazine. … You might get a little more baseball than other sports in the spring and summer, a little more football in the fall, and a little more basketball and ice hockey in the winter." Of course, with Babe Ruth's name plastered on the cover, the Great Bambino was featured throughout the comics. For the first few issues, for example, Ruth's life story was told and illustrated in a kid-friendly manner. There were also tips about how to swing a bat and throw a pitch and whatnot, mini-biographies of stars like Lou Boudreau and "The Clown Prince of Baseball", and other features kids of the 1940s might like.

But Ruth was the draw, even if kids reading the magazine were all plenty aware that he had died only the year before. So what did kids who read "Babe Ruth Sports Comics" see of their hero? From the magazine's second issue in June 1949, here's a look at "The Life of Babe Ruth: Chapter 2, Babe Enters Professional Baseball". 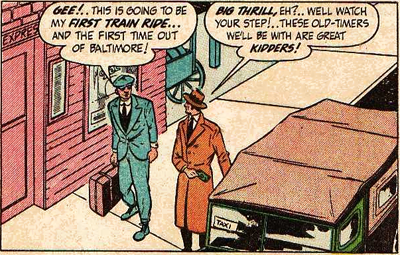 The 19-year-old left-handed pitcher was about to enter the big, wide world. I sure hope that's not a stranger he's accepting a ride from. (Click for a larger version.) 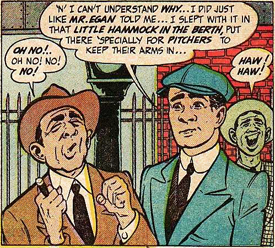 After meeting up with his veteran teammates, the young Ruth was the victim of the oldest trick in the book. A trick so old that I honestly have no idea what it was. (Check out the Pinocchio-style "hee haw" laugh of the guy in the background!) 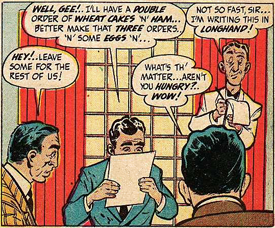 The 190-pound six-footer was well on his way towards gaining some pounds. ("I'm writing this in longhand!" is a serious burn.) 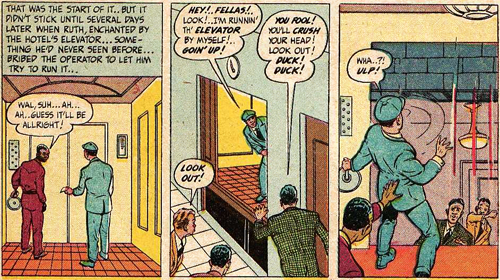 Babe's nickname came from two incidents. The second was when he almost got his head cut-off after bribing an elevator operator to let him drive the machine. "A babe in the woods!" his teammate calls him. (The accents are the best, especially the Hispanic accent of the fat guy selling a hat-wearing burro shown in a different story.) 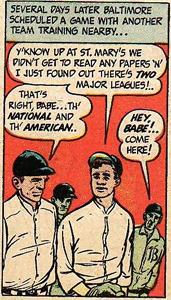 After socking a home run in his first professional game (exhibition, apparently), Babe learns of their next opponent. If the comic is to be believed, Ruth had never heard of the World Series while growing up in Baltimore. It makes one wonder—had he evern heard of, say, the Cubs then? ("The National and the American, Babe. What are you, an idiot?!") 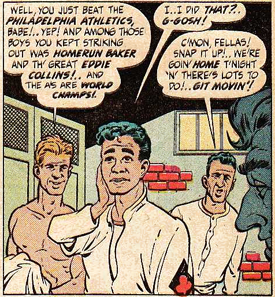 Finally, after striking out a number of players who he didn't recognize (the comic really wanted to drive that point home), a young, sheepish, and spectacularly ugly Ruth can't say anything other than "G-gosh!". How very true to life! (If I were a conspiracy type of guy, I might wonder how Chris Isaak appears in a comic published seven years before he was born.)

As you can see, the Golden Age of comics had its charms. Despite this, "Babe Ruth's Sports Comics" lasted only 11 issues, ending its run in February 1951. By issue #6, the magazine was focusing on George Mikan, Sam Snead, Stan Musial and others, meaning Ruth and his larger than life antics—and his, ahem, good looks!—were no longer a major part of the comic. It was probably doomed from the get-go, with the poor timing on its debut after Ruth's death and right before the comic world's shift into the Silver Age, but, whatever the case, it's nice to know that the stories won't be forgotten.