These are the 10 best slides of the 2012 season. There are 19 GIFs, and some of the best slides are actually the worst slides. I wish you luck!

10. Best Slide Into First Base, by Carlos Gomez

Gomez is just such a good slider, and his takeout slides are beautiful things, too. Almost nobody gets to first base faster than Gomez—admire the early concessions by the pitcher and second baseman, who know they have no shot of beating Gomez to first—and to watch him veer as he does without slowing, losing his footing, or falling out of reach of the bag sends a jolt of strain down my left leg. Replays weren't totally clear but suggest Gomez really did avoid the tag. Here's how close it was: 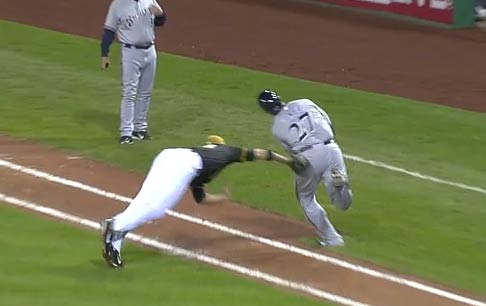 I have a special place in my heart for uncontested slides, as you'll see in a moment, and uncontested pitcher slides are great because base coaches go way out of their way to try to make sure no pitcher ever has to slide. This is Gio Gonzalez, sliding anyway.

As a subset to this one, here is the best slide by a catcher who doesn't take himself seriously as an athlete, by Kelly Shoppach.

Shoppach should have made that slide using Adrian Gonzalez's body. What? Huh? I don't even, so let's go.

8. Best Slides Demonstrating the Casual and Random Nature of Violence, by Joey Votto

First, I want to show you an uncontested slide.

Everybody who has been left wide open in a game of pick-up basketball knows that having no opponent within 10 feet can sometimes be uncomfortable. It feels too alone; having restrictions is part of what helps us focus on the tight boundaries of a successful action. Here, Joey Votto is wide, wide open and his slide is a bit askew. Nothing troubling, but it's as though he's caught between life and dream. Thankfully, there is no injury.

Next I want to show you the benign face of tragedy.

Looks good. Everything looks good there. Good slide, play over, play resumes, world goes on. Except this: Votto actually tore his meniscus on that slide, which would become clear a few days later. He ended up missing almost two months, and when he returned he was a totally different hitter, with no home runs in his final 30 games, including a five-game division series against these same Giants. He hit .389/.500/.389 in that series, so while he was clearly seeing the Giants' pitchers well enough to hit .389, he was perhaps not physically well enough to get even one extra-base hit. Is that lack of power from their best hitter the reason that the Reds lost the NLDS? Maybe. Is that the reason the Reds didn't win the World Series? Maybe. Is the very idea of "reason" an affliction that perverts our understanding of our own lives? Maybe.

At first I watched this over and over trying to figure out where he touched the plate. Then I went frame by frame. Each frame is 1/20th of a second, and it turns out that Arias touches the plate for exactly one frame. 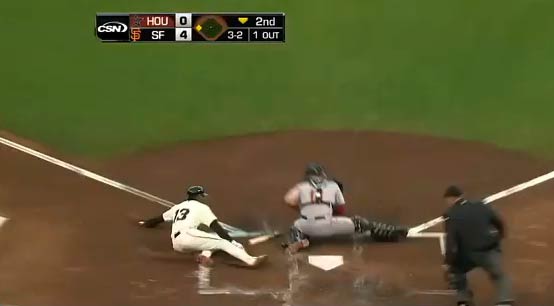 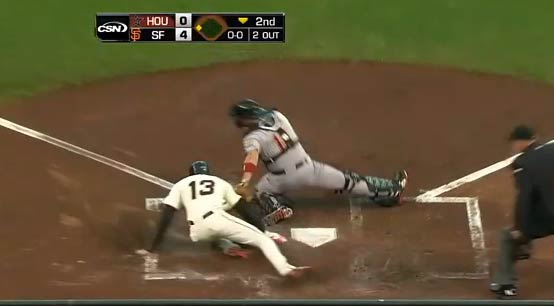 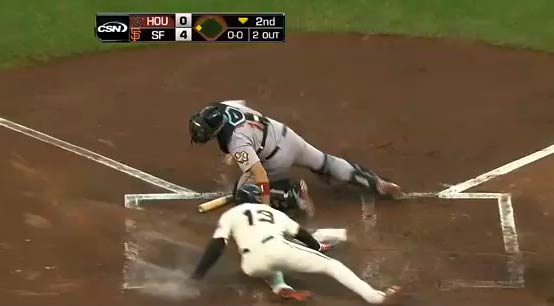 And once I'd seen it once, I could see it every time.

One notable fact about Prince Fielder is that every slide he makes is a takeout slide. He doesn't slide into bases so much as he climbs into his invisible oversized tractor tire and rolls into the base. But here he does not slide or tumble, and that's the problem.

As he ever ever ever so subtly leans as though he is going to his right, getting Hechevarria to commit in that direction and opening up the gap on Plouffe's left. Pretty sure he was out, but you and your rules.

5. Best Use of Hands on a Takeout Slide, by Everth Cabrera 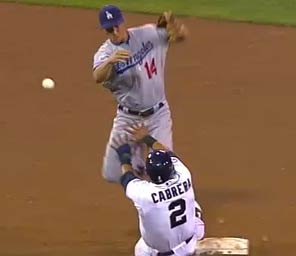 Sliding in with hands up, incidentally, can be risky. This is the worst use of hands on a takeout slide, by Freddie Freeman:

Not only did Freeman injure his finger ("Freeman's left index finger … probably won't be (completely healed) for the rest of the season"), but attempting to catch a fielder's throw is against the rules. The double play was called automatically.

In the first act of this GIF, you see Gomez successfully slide into third base. In the second act, you see Gomez presented with a moral decision, and he opts for grace.

Gomez was out. But there is a moment, which you can spot when he is perhaps 15 feet from home, when he realizes that he is within his rights to destroy the man with the baseball, and that he is being paid an insane amount of money to do so, and he starts to lower his shoulder. But then, Have I not wept for the one whose life is hard? Was not my soul grieved for the needy?

Chris Getz demonstrates what every one of us looks like when we declare a little too boldly at the bar one night that heck yeah we can TOTALLY do the worm, you want to see it? Getz failed to do the worm. He succeeded in turning his entire body into the letter C. Most committed rendition of YMCA ever.

But oh, the best part of Chris Getz's slide is not the dumb jokes I can make about it. The best part is that it was on Jackie Robinson Day, so he's wearing Robinson's no. 42. And the most famous image of Jackie Robinson is probably of him sliding into home on a stolen base. This:

Now if you can, scroll up just a little so that Getz's slide and Robinson's slide are in view at the same time, and just watch them, alongside each other, while you dream of the olden days when stupid piece-of-crap dishwashers didn't break down the fourth time you used them.

2. Best Magic Trick, by Pedro Florimon, with a nod to runner-up Matt Holliday.

Yes, the throw was offline, and the catcher maybe would have dropped the ball anyway, but the way Florimon not only changes course but makes his legs, right shoulder, and back take almost totally separate routes to home makes me really, really want to look up Pedro Florimon so that I can finally have heard of him. Here's the same play, from the same angle, but condensed to the sexy part:

Watch his left foot contort itself. Watch his right leg go slack so he can drop directly on home. Look at how his left arm turns into a T-Rex arm so that he can clench his entire torso in on itself and make his entire body too small to tag. And he does it all with a bat in his landing spot. So pretty.

Matt Holliday's slide is totally unexciting and unimpressive, except that he's safe.

To review, from this starting point, 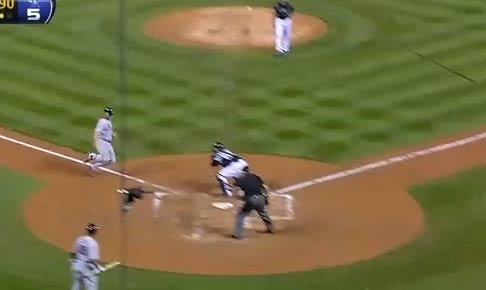 Matt Holliday is safe, and pretty easily so. 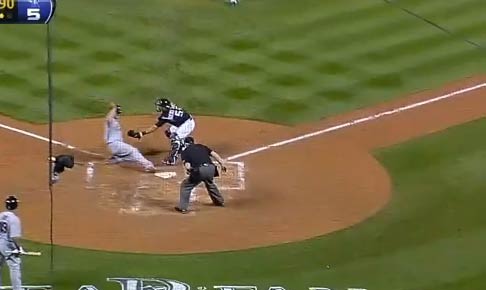 Ramon Hernandez doesn't seem the least bit flustered by the umpire's safe call, or even by Holliday being safe. "Those weren't the droids I was looking for," he dazedly told his manager.

1. The Best Slide, by Tony Campana.

I suppose it could have been Ichiro's move at home plate during the playoffs, but you all saw that one just a few weeks ago so here's one that's better, anyway, and not so fresh in your mind.

I want to chastise the third-base coach for not doing a doggone thing, but I suppose what's he going to do? "OH MAN YOU'RE SO GOING TO GET THROWN WHOA YEAH DO THAT OH SHOOT GET GO GET BAYEAAAH!" If the umpire calls you safe twice on the same play, the eventual run should count double.

You need to be logged in to comment. Login or Subscribe
apbadogs
I don't know about anyone else but these gif heavy articles make me nauseous...really hard to look at. ESC, here I come.
Reply to apbadogs
riverz
SAM MILLER Y'ALL. MASTER GIF'R!
Reply to riverz
fatted
Just like to say that this was awesome. Thankfully my browser was able to handle all the gifness.
Reply to fatted
mrgriffey
These are great. Good job, Sam - thoroughly enjoyable.
Reply to mrgriffey
draysbay
Good list, Sam, but this was the best slide of the year: http://mlb.mlb.com/video/play.jsp?content_id=20591257&c_id=mlb
Reply to draysbay
bornyank1
That was on there! Give Sam some credit.
Reply to bornyank1
dianagramr
My apologies ...
Reply to dianagramr
NathanAderhold
Loads of fun, once again. You had me at "stupid piece-of-crap dishwashers".

Does MLB.com have some sort of "awesome slides" search function I'm unaware of? How did you track all of these down?
Reply to NathanAderhold
timber
Love the Shoppach "slide." I can't believe I didn't see it at the time.
Reply to timber
dianagramr
Ichiro ... post-season

http://mlb.mlb.com/news/article.jsp?ymd=20121008&content_id=39620038&vkey=news_mlb&c_id=mlb
Reply to dianagramr
delorean
Phenomenal.
Reply to delorean
iorg34
So awesome.
Reply to iorg34
scottfrith
Tony "freakin" Campana. If the guy ever started hitting...
Reply to scottfrith
mikefast
Carlos Corporan sees Chris Getz's face-plant slide and raises with his slide into second base in the 8th inning on October 3rd.
Reply to mikefast
jeffcaudle
The Chris Getz slide was the funniest thing I've seen since the picture of Jeff Francoeur looking like a hungry rat... http://www.baseballprospectus.com/article.php?articleid=16404
Reply to jeffcaudle