A wild series opener, in which the Reds used two middle-inning homers and some eighth-inning insurance to overcome the loss of starting pitcher Johnny Cueto, portends more excitement in Game Two. Here are the PECOTA odds and projected starting lineups for tonight’s contest:

Barring unexpected changes, the starting lineups for today’s game should essentially mirror those used in yesterday’s. The lone exception may be in left field for the Giants, where Xavier Nady could get the call in place of Gregor Blanco. Thus, with a nod to the Giants’ Bumgarner over the Reds’ Arroyo, PECOTA suggests the home team has about a two-in-three chance of pulling even before the series heads to Great American Ball Park.

Bumgarner struggled to keep the ball in the yard at times in 2012, serving up two gopher balls at Petco Park in his last start of the regular season and 18 total in 102 1/3 innings away from AT&T Park. In San Francisco, though, the 23-year-old southpaw thrived, amassing a 2.38 ERA over 15 starts, including two complete games and a shutout. That shutout: a one-hitter over these Reds on June 28.

Here’s Bumgarner’s pitch chart from that outing, from Brooks Baseball: 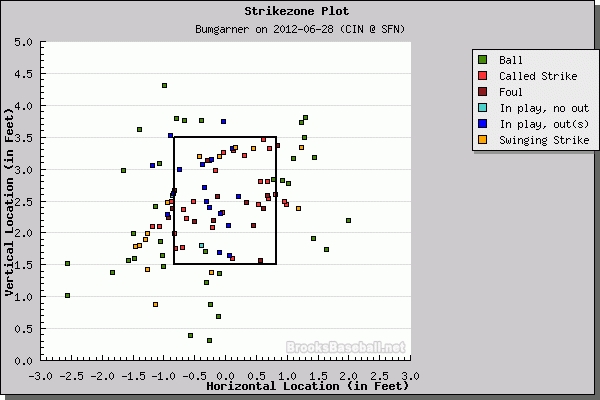 Bumgarner’s best off-speed pitch, a slider with two-plane break, was especially sharp that day, eliciting 10 swings-and-misses on 38 tries, many of them represented by those orange squares below and to the left of the strike zone. Most of Dusty Baker’s hitters are aggressive, and Bumgarner took full advantage of their willingness to expand the zone. 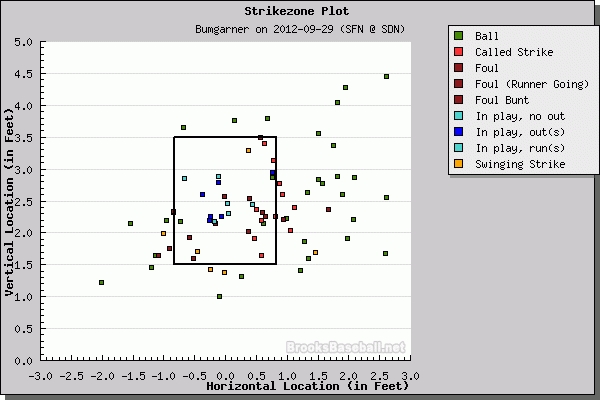 Two things: 1) Mistakes in the middle of the strike zone, represented by those light-blue squares that turned into four Padres hits, including two home runs; and, 2) An inability to draw whiffs on those sliders breaking down and away. The outcome of tonight’s contest may well be determined by the Reds’ discipline at the plate and Bumgarner’s ability to hit the corners.

That’s why Jay Bruce and Ryan Ludwick versus Bumgarner are the Matchups of the Game. Cincinnati’s corner outfielders are just 2-for-25 with six combined strikeouts against the Giants lefty, who used the slider to fan Bruce earlier this year and Ludwick when the two last faced each other in 2011.

Bumgarner’s counterpart, Arroyo, held the Giants to two runs each on April 25 and July 1, and the Reds split those contests. The 35-year-old righty has shown excellent control throughout the season, but Bruce Bochy’s offense did net 16 combined hits in those regular-season meetings, so Arroyo may need a sharper arsenal to avoid crooked numbers tonight.

Though Arroyo has limited right-handed hitters to a 606 OPS with 78 strikeouts and only 12 walks in 398 plate appearances, retiring lefties has been a challenge. They accounted for 17 of the 26 homers Arroyo coughed up during the regular season, and their 741 OPS against was the highest allowed by any qualifying National League starter. Angel Pagan, Pablo Sandoval, Brandon Belt, and Brandon Crawford are the ones he’ll need to focus on tonight.

Update (6:44 p.m. ET): Gregor Blanco gets the start in left field for the Giants.

You need to be logged in to comment. Login or Subscribe
AWBenkert
I think the charts are reversed.
Reply to AWBenkert
bornyank1
Fixed.
Reply to bornyank1