You can bet that the prospect of facing Darvish for the first time in a high-stakes game has the Orioles worked into an advanced scouting frenzy. Their season—a magical one, at that—hinges on their ability to analyze (and effectively attack) a pitcher whom their hitters have never seen.

There is some good news for the Orioles: when our own Russell Carleton took a look at historic batter-pitcher matchups, he found that while a pitcher has an advantage over a hitter in their first few confrontations, it’s not a particularly large one, and it dissipates quickly. It should be noted that the historic matchups Russell was researching preceded modern advances in video scouting and PITCHf/x, so modern hitters may have even less catching up to do. Adam Jones believes that reviewing video of Darvish is “about one percent” as helpful as hitting against him, but Baltimore batters’ mileage may vary.

As the Orioles’ analysts, coaches, and hitters study the data on Darvish, what useful information might they turn up? Before we begin, please don’t let me fool you into thinking I have any real experience at advance scouting, which involves very systematic analysis of a pitcher’s approach, including his mechanics, skill at restricting the running game, etc. This is merely a look at what a season’s worth of data has taught us about Darvish’s repertoire.

Let’s start with what makes this assignment particularly challenging: the sample size is small, since Darvish has pitched in the majors for only one season. He throws a mix of seven (!) pitches—and that doesn’t even account for the fact that he delivers the curveball in two different ways. He throws 95. He throws 65. He can be wild, but he can also be sharp. All of this uncertainty, combined with lethal stuff, has conspired to give him the highest whiff rate on his fastball among major-league pitchers (minimum 500 pitches).

Oh, and, if you’re looking for tendencies, avenues of attack, or rules to hammer into your hitters, keep in mind: he’s dramatically changed his approach over the course of the season.

If you’re hitting against Darvish, you have to be aware of all his offerings. This is no simple task.

True, he throws the changeup and split relatively infrequently. But everything else is always on the table. How can a hitter narrow down the range of possible pitches Darvish is going to throw?

Succeeding against Darvish depends on being able to anticipate which pitches he’ll lean on in particular counts. The problem is that his tendencies have changed over time.

Let’s take a look at some early-season (vintage?) Darvish, from May: 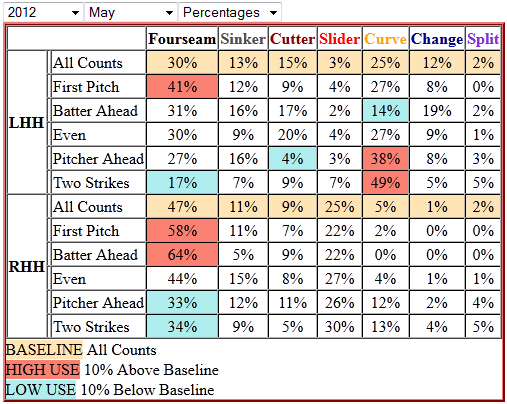 Look at the approach against left-handed hitters: 41 percent four-seam fastballs to start at-bats, and nine percent cutters. If he was ahead of you, he went to the curveball—an odd selection for a right-handed pitcher against a left-handed hitter. He also started righties off with the fastball nearly 60 percent of the time, but when he was ahead, he expanded his repertoire to include five pitches over 10 percent frequency. 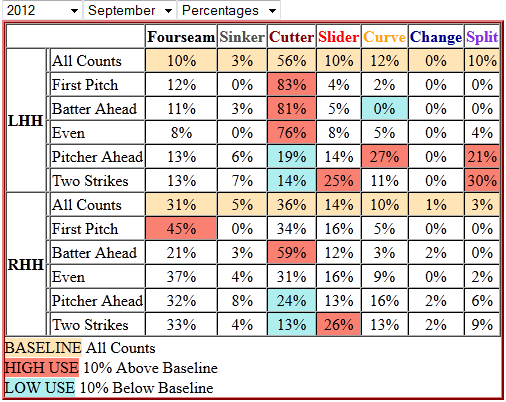 With such variable pitch-type choices, it hardly makes sense to break down Darvish by location. But just for the sake of completeness, let’s take a look at where Darvish has thrown the ball and how he’s fared in those locations.

One tendency that Darvish has is to locate the ball low over the middle of the plate. This tendency is apparent in his approach to left-handed hitters: 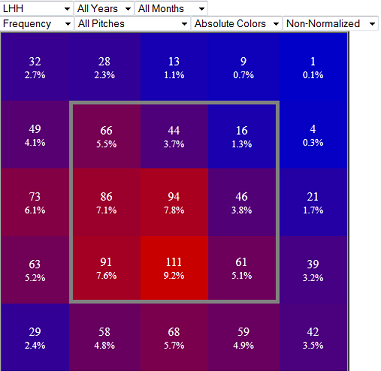 …as well as in his approach to righties: 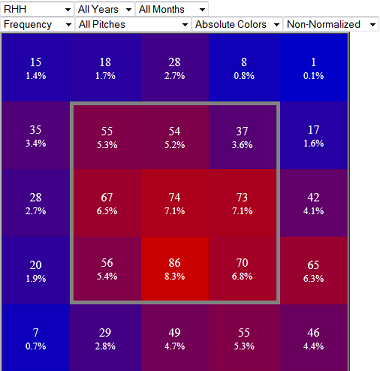 Over the plate and low tends to be a good area for hitting, and Darvish has paid the price for his willingness to throw there, surrendering a .369 batting average and a .607 slugging percentage in that location, while getting only 16.5 percent whiffs. So, one useful piece of advice the Orioles might give their hitters is that he’ll frequently attack that low part of the strike zone—and this trend, unlike some of the others that we saw, has held up through September.

The underlying story in all of this is the fact that the Orioles reassigned all of their MLB advance scouts earlier in the year. As far as I'm aware, they continue to work almost solely off video and data similar to what Dan has presented in this piece.

For as much of a stir as that reassignment created at the start of Duquette's tenure in Baltimore, it would be interesting to look at how the Orioles fared in situations similar to this one throughout the season, as well as how they do tonight.
Reply to juice133
brooksbaseball
Well there you go. Totally forgot about that. I wonder what they've come up with.
Reply to brooksbaseball