ESPN Stats and Information published an article about Stephen Strasburg’s less-than-successful start on Tuesday that noted, “Strasburg’s velocity declined as his start went on. His heater averaged 96.6 MPH in the first two innings and 94.8 MPH after. “

Here’s that decline as graphed from BrooksBaseball.net; you can see a substantial velocity loss over the course of the start. 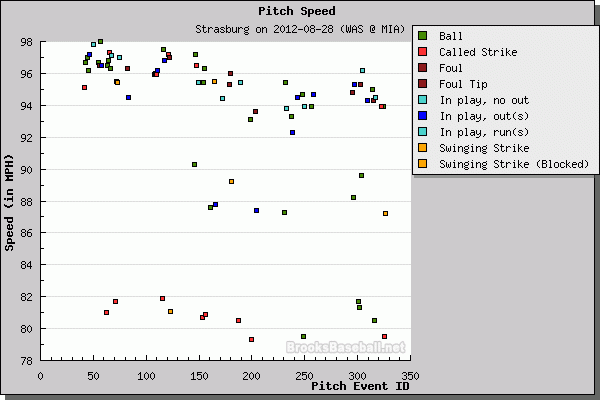 The natural question is how common this is for Strasburg. But how do you summarize velocity loss?

Earlier this year, I introduced a method in which the number of fastballs thrown in the game and the speed of those fastballs was related using a simple linear model to note within-start velocity loss (or gain).

I’ve replicated that analysis for Strasburg, below, for 25 of his 26 starts in 2012, using pitch tags from the PITCH INFO database. 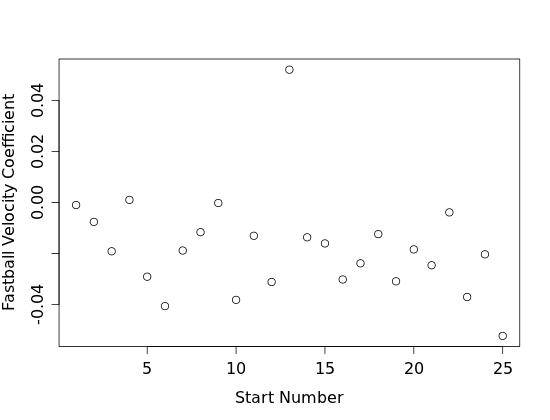 It is true that his most recent start has the most negative coefficient, indicating the highest amount of velocity loss. But it doesn’t seem as though the coefficients overall are on a downward trend: in other words, he’s not progressively losing more velocity during each start as his innings count climbs.

Instead, I would say there’s a more or less stable pattern for Strasburg, with the exception of the one very high coefficient. As a sanity check for the method, let’s examine that game: 2012-06-13. 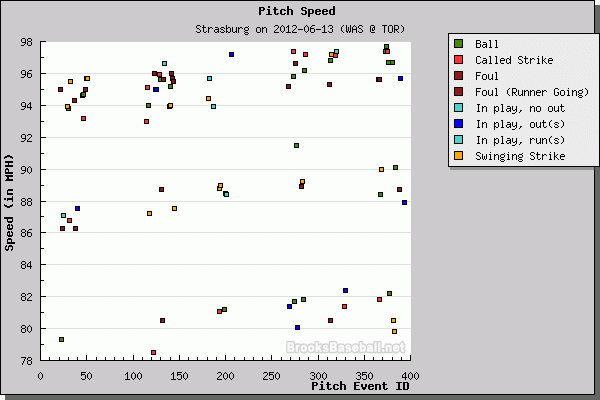 The plot shows a fairly obvious rise. But the point here is that this kind of rise isn’t characteristic of Strasburg; it’s much more normal for him to show something between little-to-no decline and a slight decline in fastball speed during each start. Tuesday's velocity loss was slightly out of the norm, but it's probably not a reason to panic.

*Update* A complete list of velocity coefficients for pitchers with at least 20 starts this season is available here. Not surprisingly, Justin Verlander is at the top.

You need to be logged in to comment. Login or Subscribe
GoTribe06
Nice analyses (and thanks for the link to your previous article...great read). I appreciate your digging deeper into Strasburg's tendency. I will say that I thought that the graph of coefficients per start was slightly downward trending at first glance.

It would be interesting to see typical results for starters over a season using this analysis, or know what the ideal tendency for long-term health would look like.
Reply to GoTribe06