One of the Rockies’ biggest wins came before the season started. In early April, the Rockies claimed right-hander Adam Ottavino off waivers. Days before, the Cardinals had designated their former first-round pick for assignment. Despite a lively fastball, the big-bodied Ottavino’s performance in the upper-minors left much to be desired; he didn’t look like a Quad-A pitcher—those guys can get Triple-A batters out.

Ottavino reached Colorado about four weeks later. He threw two perfect innings and began a stretch of seven scoreless outings. By the time Colorado adopted a four-man rotation in late June, Ottavino had 19 appearances under his belt and a 3.20 ERA. As it turns out, Colorado’s decision to try the four-man rotation has allowed two members of their pitching staff to emerge. Without the 75-pitch limit assigned to Rockies starters, it’s possible that neither Ottavino nor Josh Roenicke—another waiver acquisition—would stick out. Yet, those are two of the Rockies’ four best pitchers on the season, per run average.

Colorado has taken to using Ottavino as a piggyback in recent weeks. Although he recorded six outs in his first Rockies appearance, Ottavino would not do it again until his 23rd (an extra-innings game). Ottavino has now pitched at least two innings in each of his last nine appearances, including four three-inning stints. His numbers over that stretch are impressive: 23 1/3 innings, a 2.70 ERA, and a .582 OPS against. During a season where the Rockies own a monopoly on ineffective pitchers, Ottavino has been one of the bright spots.

With September nigh and no playoff hopes in sight, the Rockies’ attention is already on 2013. Presumably, Ottavino will return, which is more than one can say for the four-man rotation. The key is finding out which role Ottavino will take. Making Ottavino a traditional long-man seems counterproductive; the last thing the Rockies should do is limit Ottavino’s ability to impact games. As such, the Rockies’ options are limited to promoting Ottavino to the rotation or within the bullpen. Between Ottavino’s starting experience and the low bar set by the incumbents, you might think starting him would be the clear choice. But it’s not.

Ottavino’s chances of making it as a starter seem diminished by three components:

1. Pitch arsenal
Throughout this season, Ottavino has been the embodiment of a two-pitch pitcher. According to PITCHf/x data, every pitch he’s thrown in 2012 has been classified as a fastball or a slider. Ottavino used to throw a changeup, but it has yet to make an appearance this season. To his credit, Ottavino mixes and matches his two pitches well. He shows a willingness to throw either pitch in any given situation, and he can start and finish at-bats with both. Still, it’s probably not a good sign if Ottavino’s changeup quality is such that he stops using it entirely, and it’s extremely difficult to succeed with just two pitches. Justin Masterson, who gets a ton of groundballs, and Bartolo Colon, who throws a ton of strikes, are the only two pitchers with 100-plus inning and two pitches that have accounted for 95 percent or more of their offerings.

2. Release point
Then there’s the delivery. Ottavino stands on the third base side of the rubber. Nothing too peculiar there, except his placement combines with a closed landing. From a center field angle, it looks like Ottavino is releasing the ball from within the batter’s box: 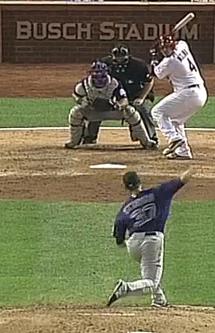 Closed landings are typically related to injuries and command woes. The reasoning being how the arm must travel across the body. Pitchers are less likely to be able to locate glove-side, so many of them are moved to the first-base side of the rubber to compensate. True to form, Ottavino seems to have issues locating his fastball away from righties or inside to lefties, allowing the batters to eliminate part of the plate.

Between these first two factors it’s a surprise to look at Ottavino’s career splits and see him better against lefties than righties. If anything, you would expect the inverse.

3. Excitability factor
This isn’t a genuine reason, but Ottavino did help put this old man to sleep: 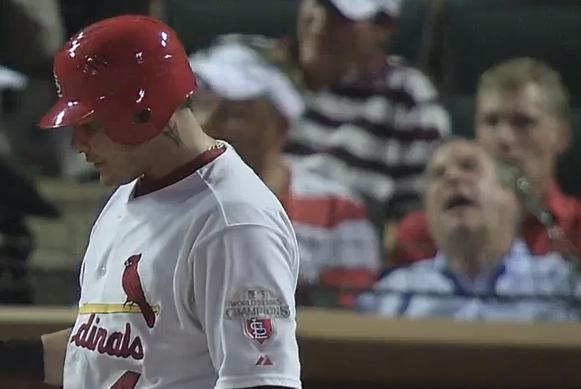 Even if Ottavino isn’t starting material, there is reason to think he can be a contributing member to future Rockies bullpens. Skip ahead to 35 seconds in the video below. Watch Bryce Harper’s swing.

Now rewind and focus on Harper’s back foot. He is swinging and stepping away from the slider at the same time. Tricking 19-year-old boys like that is an activity typically reserved for 19-year-old girls, college recruiters, and liquor companies. It’s enough to make you wonder if Ottavino’s slider has a future in the advertising industry.

As for Ottavino’s future role, he seems to be in the right organization. The Rockies have shown a willingness to promote pitchers with atypical backgrounds and skill sets into higher-leverage roles in the past. Matt Belisle has ascended from a low-leverage multiple-inning reliever to the pitcher with the second-highest leverage index on the staff. It’s not out of the question that Ottavino makes a similar leap.

You need to be logged in to comment. Login or Subscribe
rawagman
Great timing on the article. Just bumped Ottavino up my draft list for the final in-season supplemental Scoresheet draft.
Reply to rawagman
RJAnderson
I send my condolence in advance for Ottavino getting shelled.
Reply to RJAnderson
RJAnderson
Or my condolences. Whichever.
Reply to RJAnderson
kdierman
He has been a nice safe Win Vulture in my deep NL only league - Thanks for the read as I have pondered the same questions for next year.
Reply to kdierman