Neil Armstrong passed away on Saturday at the age of 82. Of the twelve men to have ever stepped foot on another planet, Armstrong's passing leaves only eight still with us, the youngest of whom is 76-years-old. There are few words that can describe someone who had such a profound—and positive—impact on the course of human history, especially one who did so with the grace and humility that Neil Armstrong showed throughout his life. It was the saddest of news.

Below is a re-print of an article I wrote at Wezen-Ball.com three years ago, as the world celebrated the greatest achievement of Neil Armstrong, Buzz Aldrin, Michael Collins, and the 400,000 people who helped make the Apollo program a success. It's a small way to remember such an important man and his legacy.

At 4:17 PM Eastern Daylight Time on Sunday, July 20, 1969—forty years ago today—one of the most remarkable feats in the history of mankind occurred: Neil Armstrong and Buzz Aldrin landed their Lunar Module, named "Eagle", on the surface of the moon. Apollo 11's mission to land on the moon captivated the world in such a way that the landing was watched back on Earth by hundreds of millions of people, easily the largest television audience ever at the time.

But not everyone was watching television at the time. In ten cities across the country, major league baseball games were scheduled, including five double-headers. The games did not all start at the same time, though, so the moon landing hit them all differently. In Seattle, for example:

"…pregame ceremonies before an American League baseball game between the hometown Pilots and the Minnesota Twins were interrupted by an announcement of the moon landing. The fans cheered, stood up and sang 'America the Beautiful.'"

The Twins-Pilots game wasn't the only one interrupted, though. The Cubs and Phillies were in the third inning of the second game of their doubleheader in Philadelphia when the announcement was made. The game was stopped for five minutes while players lined up on the foul lines and offered a silent prayer. A recording of Kate Smith's "God Bless America" was then played in the stadium before play finally resumed. There's a great image of the moment in the Fredericksburg Free Lance-Star: 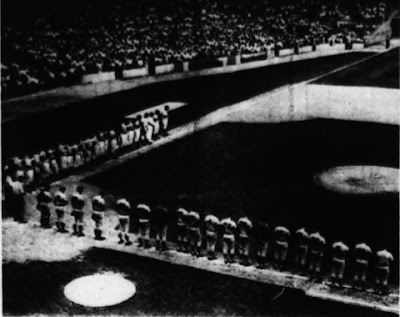 Members of the Chicago Cubs (third base line) and Philadelphia Phillies join umpires and 12,393 paying customers in a moment of silent prayer for safe completion of the Apollo 11 mission. The scene occurred during the second game of a doubleheader at Connie Mack Stadium.

But the live games weren't the only ones getting interrupted. For anyone watching the games at home on television, they were subject to the whims of the stations' producers, and those whims, more often than not, were going to go with the excitement on the lunar surface. Of course, this probably didn't bother the vast majority of people at home that day, but that doesn't mean everyone was excited about it:

"In the Kansas City home of L.L. Moore, the activity of the Apollo team on the surface of the moon ranked second to the battle for third place between the Kansas City Royals and the Chicago White Sox in the Western Division of the American League.

'My husband tried to watch the ball game and it was really pretty hard,' said Mrs. Moore. 'The television station kept switching back and forth between the space program and the ball game. Of course we watched the moon walk when it happened but we also wanted to see the Royals.'"

It's in New York, though, where we have the best account of what happened during the moon landing. It was Bat Day that Sunday afternoon, and the Yankees were playing the Senators. The score was tied 2-2 in the top of the eighth. With runners on the corners and no one out, Jack Aker faced Ken McMullen. The count was 1-2 when the 32,933 paying fans heard Bob Shepard's voice interrupt the game:

'Ladies and gentlemen, your attention please,' came the voice of Bob Shepard, the public address announcer.

The umpires, according to prior arrangements, waved their arms and stopped play.

'You will be happy to know,' Shepard continued, 'that the Apollo 11 has landed safely…'

And a tremendous cheer drowned the words 'on the moon.'

The cheering continued for about 45 seconds. On the scoreboard, the message section read 'They're on the moon.' People stood. They waved the bats back and forth. Shepard kept talking, but his words could not be made out through the din.

On the field, the players seemed confused, or impatient. Most did not turn toward the scoreboard. Finally, the announcer could be understood and he asked the crowd for a moment of silent prayer for the safe return of the astronauts.

The crowd stilled. After a few seconds of silence, a recording of 'America the Beautiful,' sung by a chorus, blared through the loudspeakers. At the end of the song, another mighty cheer arose, just like the one that usually greets the completion of the National Anthem before a game.

The game resumed at 4:21 pm. McMullen bounced into an out at the plate, and exactly one hour later the Yankees scored the winning run.

I can't think of a better place to be to hear such incredible news than in the company of 33,000 other excited people (well, other than at home watching it live, I mean). I can only imagine the feeling of awe and wonder that everyone in attendance that day must have felt when Bob Shepard made that announcement. I suspect no one remembers the 11th inning Gene Michaels basehit that won the game for the Yankees that afternoon, and I doubt that it was even much of a topic of discussion as people exited the ballpark. The two astronauts on the moon must've been much too intriguing.

On a personal note, I've lived my whole life in the post-moon landing world. To me, the impossible has always seemed achievable because of the outrageous success of Project Apollo and the immense effort that went into making it. I only wish I had been able to experience it first hand, instead of having to learn about it through books and movies. I mean, I was excited when two robots landed on Mars—I have no idea what I'd be thinking if men were landing on the moon.

I am glad that the 40th Anniversary is being handled so well, and that it seems to be inspiring people anew. It gives me hope that I'll be able to witness something similar in my lifetime. In the meantime, I guess I'll just have to settle for the awesome We Choose the Moon website. But if anyone wants to put up a couple (dozen) billion dollars to send me to the moon, I'm game!

The moon is not a planet.

As to the impossible being acheivable, well, not so much any more. Not only have we not been to the moon in 35 years, we have to rely on the Russians to put an American into orbit.
Reply to eighteen
harderj
And of course there's the perhaps apocryphal story of Gaylord Perry's first career home run coming within minutes of the landing, "predicted" either by himself or manager Alvin Dark.

Reply to harderj
LynchMob
http://www.contracostatimes.com/giants/ci_21427514/neil-armstrong-and-one-giant-swing-by-gaylord
Reply to LynchMob
LynchMob
Thanks ... well said ... a very good way to remember that day ...
Reply to LynchMob