On April 9 of this year, after watching one of the day games on the east coast, I turned to the Giants vs. Rockies game. Barry Zito was on the mound for the visiting Giants, and I was particularly interested in how he fared, as I had studied his career path extensively for the 2011 Hardball Times Annual. My analysis had been done at the end of a strange 2010 season in which Zito had looked like he was on the verge of a big rebound, only to decline down the stretch to the point that he was not included on the postseason roster.

The following season did not prove to be much help in deciphering whether Zito would continue to be the unspectacular back-of-the-rotation guy he had been since crossing the Bay Bridge or recover some resemblance to the pitcher who had induced the Giants to reach deep into their pockets in 2007.

For the first time in his career, Zito landed on the disabled list and missed a good chunk of the season.

So there I was, watching him play. Unfortunately, I’m not much of a night owl, so I was finished after three innings. On some occasions, three innings would have been longer than Zito lasted, especially in Coors Field. But that day was different. Zito was nearly perfect his first time through the order, retiring the Rockies in order until finally surrendering a hit to the opposing starter, Jhoulys Chain.

The following day, I was surprised to read the final line of Zito’s first start of 2012: a four-hit complete game shutout. At the end of the month, Zito still had only that one win, but he hadn’t lost a game. To go with his undefeated record, he had an 1.67 ERA.

That was impressive, but it seemed unsustainable, both because of his .188 BABIP and because he had begun 2010 even better (4-1, 1.53) before collapsing down the stretch.

Release point
In my article for the THT Annual, I noted that Zito’s evolution from disaster (which he had become once he signed his contract with the Giants) to adequate back-of-the-rotation guy had coincided with a lowering of his release point, though the fact that the two developments coincided did not necessarily mean that one had caused the other.

Back then, I had not yet developed my algorithms to adjust PITCHf/x data. Thus, I had to follow a few different methods to confirm that the release point change was real and not simply a product of changes in PITCHf/x calibration at AT&T Park. I went hunting for pictures of Zito on the web and also compared his data with his teammates’. Luckily, the Giants had had the same four pitchers starting most of their games from 2008 to 2010. Since none of the others had showed similar shifts, I concluded that Zito really had lowered his release point.

Now that I have adjusted data, I feel more comfortable in looking at release points at a more granular, game-by-game level.

I started the game-by-game investigation with 2010, for a couple of reasons:

So here are the release points for Zito in 2010: 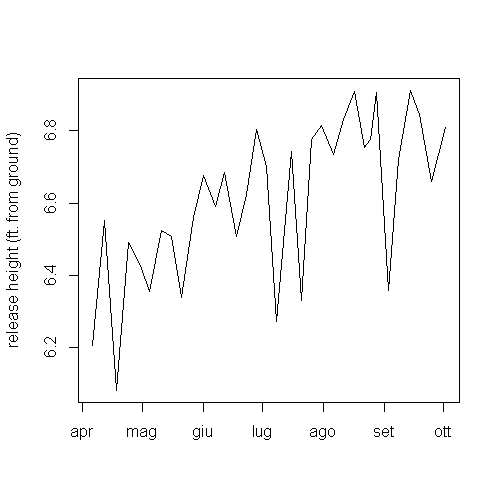 Zito improved a bit from 2008 to 2009 by lowering his arm from 6.7 feet to 6.3 feet, then started 2010 on a roll with an even lower release point (6.2 feet and below on a couple of occasions). Then, as the season progressed, he raised his delivery back to his 2008 values (and beyond) and struggled mightily. There’s no more reason to doubt the low-release-point-equals-improved-performance theory.

Or is there? Maybe it worked the other way around: Zito had a lower release point because he was pitching better. But why would that be?

In order to keep your arm up, you have to battle against gravity. Try this experiment. (Actually, don’t. Just read the following lines and imagine yourself doing it.) Raise your arm and keep it in a vertical position. Meanwhile, read all of today’s articles here at BP, and maybe the ones we published yesterday, too. That’s a bit tiring, isn’t it? At the end of the experiment, your arm is likely not perfectly vertical anymore, but held at a lower angle.

I suspect the same happens to pitchers: the longer they stay in the game, the more their arms tire, and the lower their release points become.

So, in April of 2010, Zito was successful, and as a result, he stayed in games longer. Therefore, his average release point (consisting of more late-game measurements) was lower than it was later in the year, when he was terrible and Bochy had to yank him early.

I did some quick analysis on the full 2011 season and found that pitchers, on average, lower their release point by roughly 0.01 feet for every 10 pitches thrown in a game. That is, at the 100th pitch, they are expected to have lowered their arm by 0.1 feet.

Is that enough to explain Zito’s tendency in the chart above?

Here’s a new version of the chart, obtained after some data massaging in order to remove the fatigue effect. 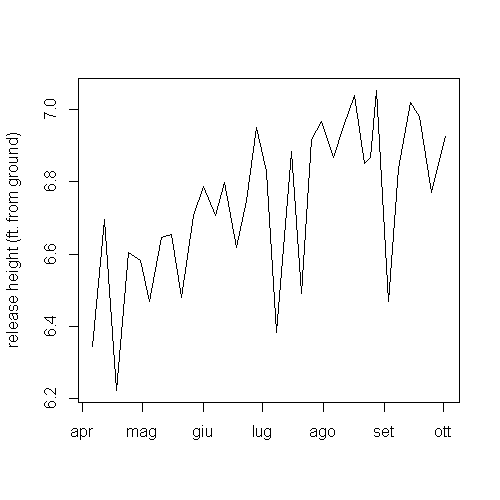 The differences are minimal. Zito did progressively raise his release point during the 2010 season.

Arm slot and performance
As you can see from the chart above, vertical release point is subject to game-to-game variation. However, this does not prevent us from spotting an overall trend (increasing, in the case of Zito in 2010.) In the chart that follows, our “visual gut” has been replaced by smoothing, so that the ups and downs are already removed and the general trend appears.

The 2011 season is not reported because of the limited number of games played by Zito. 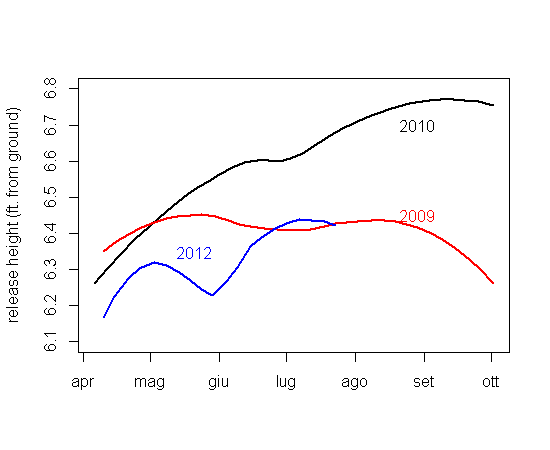 In 2009, the rise did not happen, while it looks like this year might end up being comparable to 2010.

The chart below depicts the corresponding trends in Fair RA, also smoothed in order to remove day-to-day variance. 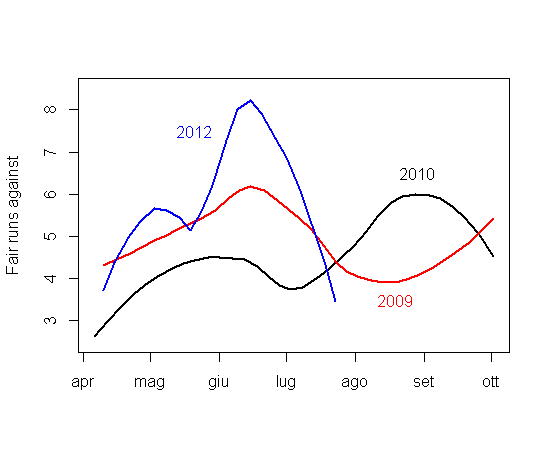 Look back and forth between the last two charts. Consider the trend in 2010. Zito’s release point rose steadily from start to finish, with a brief plateau in July and a slowing ascent in the final games. His performance followed a similar path, with analogous small changes in trend both in July and at the end of the year.

The 2012 trajectories look similar, albeit not perfectly synchronized.

Tying Zito’s performance to his evolving release height because of the charts above is quite a stretch. However, his habit of progressively modifying his arm slot is at least curious, particularly so because, if anything, we would expect it to move in the opposite direction due to increasing fatigue.

Let’s keep an eye on this issue as Zito’s surprisingly successful season continues.

You need to be logged in to comment. Login or Subscribe
andygamer
A similar analysis on John Lester and Tim Lincecum would be interesting.
Reply to andygamer
gweedoh565
Totally irrelevant, but I love the italian month abbreviations in the charts. Gives the article an exotic flair.
Reply to gweedoh565
maxtoki
I keep forgetting to change my locale when working on non-Italian stuff.

Should probably change the default.
Reply to maxtoki
ScottBehson
The sentence below the link to this article on the main BP page reads "Barry Zito's performance seems to rise and fall along with his performance." well, duh. I bet you meant arm angle or something. ;)
Reply to ScottBehson
dpease
oops, fixed thanks
Reply to dpease