Last night, Aroldis Chapman allowed an earned run, after 29 innings of allowing no earned runs and striking out almost every other batter he faced. This was a stimulus that caused at least three responses. First, and maybe most obviously, it made the Reds lose to a team only two games behind them.*

*Have the Pirates reached the point where we can call them a “division rival”? Or are they still just another team that happens to play in the same division?

Second, and maybe most unfortunately, it made this headline happen:

Third, and maybe most predictably, it made approximately everyone watching chuckle, shake his or her head, and intone, “You can’t predict baseball.”

Before their consecutive doubles that drove in the run in the top of the 10th, Clint Barmes was batting .188 and Michael McKenry, whom I just discovered is nicknamed “The Fort,” was batting .185. They hadn’t done a lot of hitting. Aroldis Chapman had a .074 batting average against. He hadn’t done a lot of allowing hits. Actually, he hadn’t allowed two hits in any of his outings this season, let alone two consecutive ones.

And then this happened: 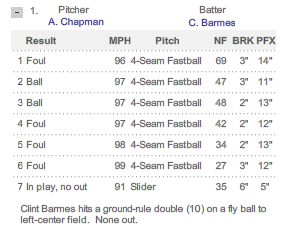 And the Pirates’ announcer, echoing the thoughts of all his viewers, said ““How about that! Clint Barmes!”

I wrote yesterday that Chapman is intentionally throwing a little less hard and hitting 100 a little less often this season, for the perfectly reasonable reason that he doesn’t want to walk people. That doesn’t mean he can’t still throw harder than anyone when he wants to. After getting burned by the slider to Barmes, and with the go-ahead run in scoring position, Chapman thought, “to hell with breaking balls,” reached back for a little extra, and threw gas. And then this happened: 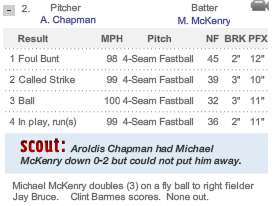 “Scout” was clearly smirking when it said that.

Chapman got a pop-up and two strikeouts to end the inning, and order was restored. But for a few minutes there, everything was upside down. Clint Barmes and Michael McKenry could get hits, and the Pirates could score, and Aroldis Chapman could let them. We all sort of expected that when the unthinkable happened and Aroldis Chapman finally allowed a run, it would be against worthier opponents than two of the worst hitters on the worst-hitting team. It couldn’t have come against Joey Votto, because Joey Votto is on Aroldis Chapman’s team. But it could have come Ryan Braun, or David Wright, or Carlos Gonzalez in Coors, or hell, if it had to be the Pirates, at least Andrew McCutchen.

But it was so much better this way. Because baseball.

You need to be logged in to comment. Login or Subscribe
mnsportsguy1
"Because baseball" might be my new favorite phrase. I've seen it elsewhere on the site, but don't remember if they were all your articles. Was it you who started it on the site?
Reply to mnsportsguy1
bornyank1
I don't remember using it before, and I can't find other instances through the search tool on the site, though I might be missing them. But if you like it so much, maybe we'll end every article that way. It usually applies.
Reply to bornyank1
rawagman
Could "Because baseball" be shorthand for Ron Washington's "That's how baseball go"?
Reply to rawagman
mnsportsguy1
thats pretty sweet that i may have imagined it being on here somewhere
Reply to mnsportsguy1
mnsportsguy1
I found where i saw it most recently, Jeff Sullivan on SBNation
Reply to mnsportsguy1
bornyank1
Makes sense. Jeff is great.
Reply to bornyank1
jsdspud
With the events like last night, MAYBE this is finally the year the Pirates have a winning record. (knocking on wood as I type) This has been a fun start to the year for this long suffering fan.
Reply to jsdspud
LynchMob
I'd guess that Barmes did *not* hit a "ground rule double" ... but rather the much, much more common "automatic double" ...

Just a pet peeve of mine ... I wonder if anyone actually tracks how many actual "ground rule doubles" are hit each year ... any?
Reply to LynchMob
blcartwright
and then Chris Resop caught Ryan Ludwick, who had already homered twice, looking at strike three, and the game was over.
Reply to blcartwright
KJOKBASEBALL
nicknamed â€œThe Fort,â€

In the Texas League, I heard him called "Quadzilla" a few times....