We know at least one thing for sure about the future of Orioles outfielder Adam Jones: whatever Jones does today, tomorrow, or in 2018, he won’t lack for meal money. Last week, the O’s signed the 26-year-old to a six-year, $85.5 million extension that includes a $2 million signing bonus and guarantees him an average annual salary of roughly $14 million over the next six seasons. If Jones plays poorly, he’ll still have more money in the bank at the end of the deal than most players ever make. If he plays well, he’ll be young enough to command another mega-contract when he finally becomes a free agent. Either way, his financial future is assured.

We can’t predict Jones’ on-field future with quite the same clarity. Jones is two months into what’s shaping up to be a breakout season, which probably prompted the Orioles to make a long-term commitment when they did. Even after an 0-for-2 performance on Wednesday night snapped a 20-game hitting streak, he boasts a .327 True Average (TAv), the fifth-best figures in the American League and a giant leap above both his .265 career TAv entering the season and the .282 mark he managed in 2011. If what we’re seeing now is Jones’ new true talent level, Baltimore could spot him several more million and still get a steal on the extension.

However, some giant leaps lead to stumbles. Jones won’t be a bust, but if he regresses toward his past performance, the Orioles might wish they’d bought a little lower. With the exception of last night’s 0-fer, Jones has stayed hot even as the first-place Orioles have faltered. But to keep his stats from suffering a similar swoon, he’ll have to play his way into an extremely exclusive group. Few players have sustained a power boost like the one Jones has shown in April and May over a full season. Jones’ isolated power, a measure of how many extra bases he averages per at-bat, has risen from .185 last season to .304 in 2012, placing him behind only Josh Hamilton and Adam Dunn. Only 11 players in history have raised their ISOs from under .200 in one season of at least 500 plate appearances to over .300 in the next.

On average, the players who pulled this off in the past were roughly Jones’ age when they did so. And on average, they gave back roughly half of their power gains in the following season. Even if a player can hit for dramatically improved power over 500 plate appearances, he’s unlikely to replicate the performance over his next 500 trips to the plate. Jones’ “breakout” has lasted less than half that long, so we should regard it with considerable skepticism. What’s more, his power outburst has been accompanied by another trait that makes the “new” Jones difficult to compare to any prior player: unprecedented impatience.

Even if a player lacks selectivity, the presence of power usually leads to at least the appearance of patience. As pitchers learn to respect a batter’s ability to hit the ball over the fence, they try to neutralize his strength by nibbling at the edges of the strike zone and issuing intentional walks. As a result, the batter’s walk rate rises.

Last season, the correlation between ISO and the percentage of pitches seen in the strike zone was -0.48, indicating that as a player’s power increased, the percentage of potential strikes he saw tended to decrease. It’s no coincidence that single-digit home run hitters like Darwin Barney, Elvis Andrus, and Brett Gardner saw the highest percentage of strikes, while sluggers like David Ortiz, Ryan Howard, and Giancarlo Stanton saw among the lowest.

Jones has walked very slightly more often than he did last season, but despite his home run barrage, his walk rate remains among the league’s lowest. The five AL players with at least 200 plate appearances and lower walk rates than Jones’ have combined for three fewer homers than the 16 he’s hit on his own. The percentage of pitches he’s seen in the zone has fallen, but only from 48.3 percent to 47.3 percent. He hasn’t received a single intentional walk, even with Matt Wieters hitting .226 behind him. Either pitchers aren’t yet aware of the extent to which Jones has punished their peers, they don’t believe it will last, or they’re taking their sweet time to adjust.

No player has ever qualified for the batting title with an ISO as high as Jones’ .304 and a walk rate as low as his 5.9 percent. Either Jones is about to do something no player has ever done before, or something is going to give. Not only will his present be much more productive if it’s the walk rate that rises instead of the ISO that falls, but his future will look a lot rosier, too.

To estimate how much better Jones’ outlook might be with more walks, I separated all 35 retired players who had an ISO between .250 and .350 at age 26 into two buckets. One bucket comprised the 20 such players who walked in less than 10 percent of their plate appearances. The other contained the 15 who walked in more than 10 percent of their plate appearances. Both buckets featured a mix of encouraging and discouraging comps, but there did appear to be some differences, though the sample sizes weren’t conclusive. Here’s how the members of each bucket aged. 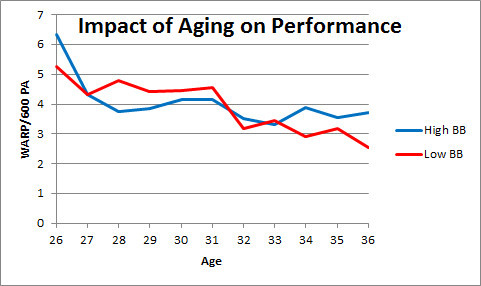 As measured by WARP produced per 600 PA, the low-walk group’s performance declined steeply at age 32 and continued to decline more slowly thereafter. The high-walk group’s performance remained comparatively stable from ages 28 to 36, perhaps because its members were able to compensate for their decreased power by working their way on with walks. We can also see the difference reflected in a graph of total playing time for each age group. 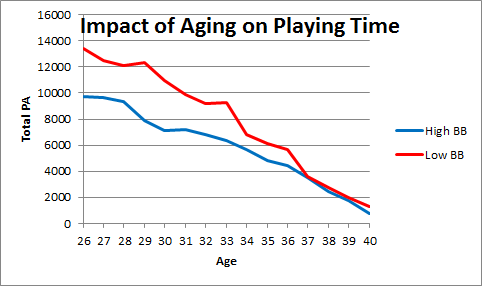 That’s not good news for Jones, but it’s not necessarily bad news for Baltimore. The graphs above show that low-walk power hitters don’t start to suffer relative to high-walk power hitters until their age-32 seasons. After age 32, Jones won’t be the Orioles’ problem, so they can enjoy his prime production now and let someone else overpay for what could be an unforgiving decline phase later. The Orioles might have gotten a slightly better deal had they inked Jones to an extension before or even after his recent extra-base binge, but they appear to have picked the perfect time to cut off the contract.

Walk rate is a skill that peaks late, so Jones will almost certainly draw free passes at least a little more frequently over the rest of his career than he has to date. He started from a point of such impatience that he’ll never be a big on-base threat, but the damage he does when he hits the ball, coupled with the value he derives from being an above-average baserunner and an above-average fielder at a premium defensive position, has amounted to an average of 3.7 WARP over the past three seasons. Even if any lasting improvements he’s made this season are only incremental, the Orioles will have locked up a productive player at a reasonable rate. They just won’t have locked up a patient one.

You need to be logged in to comment. Login or Subscribe
johnsamo
For a small market club, it's a good gamble. It's doubtful Jones keeps this pace up, but averaging $14 million to age 32 (and barring injury) this can't ever be a Vernon Wellsesque fiasco.
Reply to johnsamo
Schere
The Orioles are not a small-revenue franchise. I agree with the rest of your comment.
Reply to Schere
bhalpern
If the O's really start playing well for an extended period of time it will be telling to see how much the Nats affect their ability to move up the payroll ladder.
Reply to bhalpern
bhalpern
Don't jinx it ;-). Seriously though if Jones settles in at ~.250 ISO it's a great deal. Where else on the free agent market or in their own system are they going to get the chance to get anywhere close to that package? Especially, as you astutely point out, without committing to a player's mid-to-late 30's seasons. Plus they're paying the current year going rate for that kind of performance for 2-6 years into the future (2013 would have been a arb year).
Reply to bhalpern
Eisenstat
Except for Lynn and Anderson, that's a pretty impressive list.
Reply to Eisenstat
smallflowers
What's not impressive about those two players?
Reply to smallflowers
ddufourlogger
I have liked Jones for several years, and I think most of the baseball world thought he could become the player he is right now. So if he really is "there" to stay, kudos to him and the O's for seeing it. If true, the deal is very good for both sides.

It does make me think of the Nick Markakis deal, though. I like Nick also, and have for years, but he's a guy who hasn't really earned that $66M-ish over 6 years (going off memory). A good player, to be sure, but hardly what the O's thought they'd be getting when they signed him after he seemed to break out. Hope Jones does not turn out the same way.
Reply to ddufourlogger
dethwurm
This isn't related to the walk issue, but I think it's important for sabermetrics in general:

Basically, if you hold ISO constant, as BA goes down BPH goes up. However, the underlying skill is power, not "ISO", which is just a proxy, so usually -- not always, but frequently -- a hitter's power is about he same and increased ISO correlates with a BA spike, so when BA goes down of course ISO goes back down.

Jones's ISO has gone way up but so has his batting average, up to .317 after sitting around .280 for awhile. Right now he's averaging 1.94 BPH. If he keeps that while returning to a BA of .280 his ISO will fall to about .260. That's pretty much exactly in line with what Table 1 shows.

Granted, power (BPH) and BA are probably somewhat correlated since they presumably derive in part from the same underlying skill (velocity off the bat), but as Mike Fast showed from HIT F/X data last year, BA and power come from basically opposite effects in terms of launch angle (BA goes higher near 7 degrees, HR frequency peaks around 35 degrees). The real question is basically if Jones learned how to launch pitches at a HR-friendly angle better than in the past, and if so, if that skill is sustainable. If it is, the walks will come, since pitchers will stop challenging him.

Since we don't have HIT F/X data, I suggest that comparing historical BPHes would give us at least a decent idea about the second. If you've got the time (maybe a future article), it would be interesting to look at players with similar increases in BPH, and how sustainable they are, if they beget higher walk rates, etc.

Whew, sorry for the essay. None of this is meant to detract from your work. You've had an epic, Jones-ian breakout this year yourself, and hopefully that $85M contract is right around the corner :)
Reply to dethwurm