A broken scoreboard. An ultra-quick pitcher trot. A man catching both home run balls when two players go back-to-back without moving from his seat. David Ortiz. All we needed last night was a walkoff home run and we would have truly had everything.

Let's get right to the trots!

I'm just talking about Giancarlo Stanton, who hit a 468-foot grand slam directly down the third base line at 122 mph. It is both the quickest home run since Hit Tracker Online started recording data and also the farthest of all home runs that left the bat at such an extreme angle. Even better, though, is that the home run slammed into the big scoreboard at Marlins Park behind the leftfield bleachers. As you might imagine, a ball hit as hard as it was did quite a bit of damage. 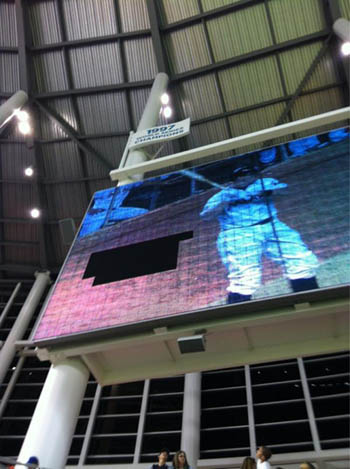 Slowest Trot: David Ortiz, Boston Red Sox – 27.35 seconds [video]
David Ortiz can also hit the ball really, really hard, this time sending it off onto Eutaw Street in Baltimore. The next slowest trot after Papi belonged to Atlanta's Juan Francisco, who either watched the ball before deciding if it were fair or who spent a moment admiring the home run he hit off his former team. It felt like the former to me.

Tampa Bay's BJ Upton hit a home run as well, but his time is not counted. The ball was ruled a double on the field but overturned to a home run after review. As with all non-continuous trots, Upton's time is ignored.

Quickest Trot: Mike Leake, Cincinnati Reds – 17.47 seconds [video]
Is it wrong to say that he ran as if the cops were after him?

Reds pitcher Mike Leake hit his first career home run in the fourth inning of last night's game. He then proceeded to sprint around the bases at nearly top speed. If it weren't for just the slightest slow down as he reached third base, Leake might have challenged Carlos Gomez for quickest trot of the year. As it stands, Leake ends up with the fourth quickest trot.

Also, the story of the guy who caught Leake's home run is pretty great.