In the June 2009 issue of ESPN The Magazine, Bill Simmons wrote an obituary for the bat of David Ortiz. “Look, I’ve seen slumps,” Simmons wrote in reference to Ortiz’s awful April. “This was different. This was the collapse of a career.”

The Sports Guy can be excused for giving up on Ortiz too early. Ortiz was coming off a 2008 season in which he’d managed only a .293 True Average (TAv)—still a strong figure, but by far his worst with the Red Sox. His start to 2009 was far worse: Ortiz hit .185/.284/.287 with one home run through May. (That line translates to a .205 TAv, a near match for Albert Pujols’ .209 mark in 2012.) He was also 33 years old and stuck in the steepest part of the aging curve, which made his decline seem especially ominous. As Simmons wrote, “That’s what happens to beefy sluggers on their way out: Their knees go, they stiffen up, bat speed slows and, in the blink of an eye, they’re done.” Great hitters don’t often fade quite that quickly, but Simmons was hardly the only observer who thought Ortiz was over the hill. Nearly everyone who saw Ortiz early that season came away convinced that his bat had slowed significantly, and possibly permanently.

Ortiz’s recent run of success would be remarkable even if his bat hadn’t looked like it was on life support as late as April 2010. Very few players of a similar age have ever been both as good and as durable as he has over the past two seasons. Ortiz is just the 13th player to record a TAv of at least .310 in at least 1200 plate appearances from ages 34 to 35. Of the previous 12, seven are already in the Hall of Fame, and the other five are either not yet eligible for the ballot or still receiving strong consideration.

In contrast with his past few campaigns, Ortiz is off to a blistering start in 2012, raising hopes for an even more successful season. Even after an 0-for-4 performance on Wednesday night, Ortiz’s TAv sits at .343, fifth in the American League and in line with his best seasons. However, Ortiz has a .353 BABIP, well above his .304 career average. Ortiz’s expected BABIP based on his batted-ball distribution is in line with his more modest .317 figure from 2010-11. If we lower his triple-slash stats accordingly to reflect his underlying performance, his 2012 looks more like a continuation of his 2011 than a return to his heyday. At Ortiz’s age, of course, merely maintaining a high level of production is an impressive feat.

So what has Ortiz done differently over the last couple seasons to arrest his decline and put himself in such elite late-career company? The solution is as simple to summarize as it is difficult to achieve: Ortiz is making much more contact, and when he hits the ball, he’s hitting it harder. 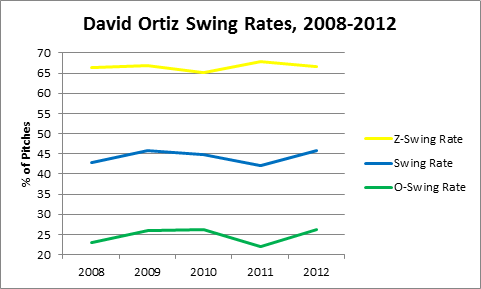 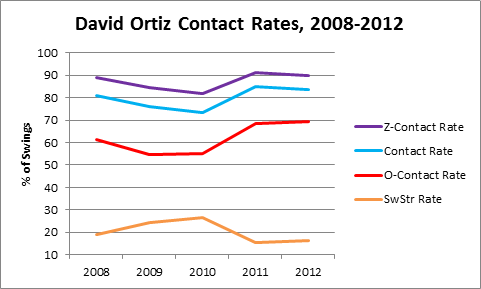 From 2009-2010, Ortiz’s swinging strike rate rose, and his contact rates fell: his extra swings were coming up empty. That changed last season, when Ortiz dialed his swing rates back to 2008 levels and made more contact as a result. But in 2012, he’s doing something else entirely: he’s swinging more often, and he’s also making more contact. The Ortiz of today swings just as often as the Ortiz of 2009. The difference is that his extra swings this season are hitting their targets, even outside the strike zone.

As one would expect, Ortiz’s improved contact rate over the past two seasons has led to a marked reduction in strikeout rate.

As hitters get deeper into their 30s, their strikeout rates tend to increase. Ortiz’s career-high strikeout rates in 2009 and 2010 were consistent with this trend, but his career-low (min. 500 PA) K rates over the past two seasons have flown in the face of it. At an age when most hitters find it increasingly difficult to make contact, Ortiz is whiffing less than ever. Since he isn’t making more disciplined decisions about when to swing, they key to his success likely lies with the swing itself.

In his magazine piece, Simmons lamented, “[Ortiz’s] bat was so slow he had to cheat on fastballs; even then, he couldn’t catch up.” The data back up his assertion. In 2009, Ortiz had little trouble with fastballs 92 mph and below, but he batted .179 and slugged .390 on fastballs 93 mph and above. In 2010, his bat speeded up again, and over the past two seasons, he’s fared even better against harder heaters than he has against slower deliveries.

One more piece of evidence supports the theory that Ortiz’s 2009 struggles can be blamed on decreased bat speed. The following table shows Ortiz’s seasonal OPS+ on balls in play to each field since he arrived in Boston. A number higher than 100 indicates that Ortiz hit better than the league in a given direction; a number lower than 100 indicates the opposite.

The 2009 season was the first time that Ortiz was a below-average hitter to right field, suggesting that he wasn’t getting around quickly enough to drive the ball in that direction. In 2012, he’s once again enjoying great success when he pulls the ball (as well as when he hits it anywhere else). Over the past two seasons, Ortiz has even hit southpaws better than he has right-handers, a first for the formerly platoon-challenged slugger.

Statistics like these give us the “what,” but not always the “why.” The numbers suggest that Ortiz lost bat speed in 2009 and has since regained it, but they don’t tell us how he turned back the clock. That may be a question best left to a scout, but we can offer some speculation. One possibility, which a trio of BP authors raised at ESPN three years ago, is that Ortiz hadn’t fully recovered either physically or mentally from an injury to the tendon sheath in his left wrist that sidelined him for two months during the second half of the 2008 season. It’s also possible that Ortiz’s improvement can be traced to significant changes in his physique, preparation, and approach.

Compare this image of Ortiz from April 2009… 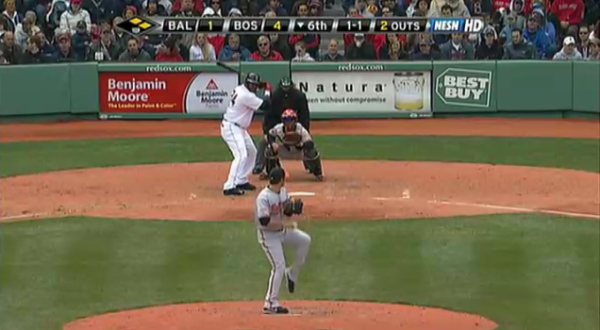 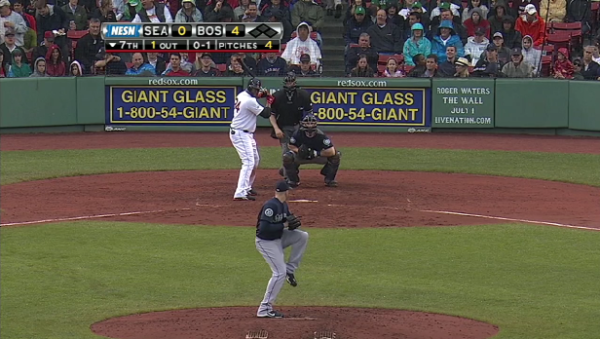 One thing is immediately apparent without either a scout or a scale: Big Papi isn’t quite as big as he used to be. Ortiz lost 17 pounds over the winter by giving up alcohol and changing his diet to combat high cholesterol. The weight loss could be contributing to his quickness. Ortiz has also reportedly credited additional action in spring training with helping him avoid slow starts: in 2009, he got 40 at-bats in the Grapefruit League, but he’s averaged 60 in the three preseasons since.

Ortiz’s mechanics have undergone some changes almost as striking as his slimmer stomach. It’s clear from the images above that he’s standing much straighter at the plate before the pitch is delivered. He’s also using a much higher leg kick now than he was during his 2009 struggles. In April 2009, his foot barely left the ground before his swing. 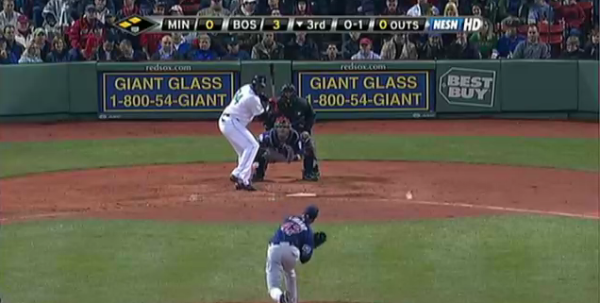 Now, he raises his front foot to the level of his back knee. Since he lifts the leg higher, he also has to pick it up earlier, helping him get his swing started soon enough to turn on anything. 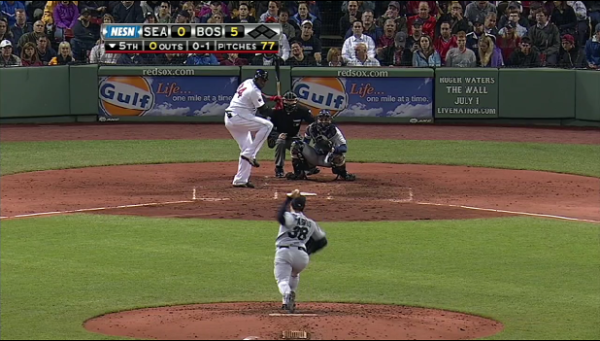 Ortiz has also worked with Red Sox hitting coach Dave Magadan to shorten his swing and keep his hands inside the ball—another change that’s visible on video—and he’s made an attempt to go the other way and lay down the occasional bunt in an effort to thwart the shift. All hitters have to make adjustments as age creeps up and bat speed slows. The best ones find ways to compensate for their declining skills and postpone the inevitable with altered mechanics and an improved approach. Ortiz’s tweaks won’t work forever, but credit him for his willingness to work to extend his lease on major-league life.

You need to be logged in to comment. Login or Subscribe
SaberTJ
Great stuff Ben. If only Hafner could have made such a recovery.
Reply to SaberTJ
BurrRutledge
1) I love all the imbedded visuals in the articles this year. But that's unrelated to the subject at hand: the explanation for Ortiz's defiance of the dreaded Age Escarpment. And it's a great exploratory article. My guesses:

2) took a while to recover from the injury.

3) best shape of his career.

5) lighter bat? Not sure if there is any evidence that he might have switched his lumber, but I'm speculating simply based on the results.

Reply to BurrRutledge
SaberTJ
Did you even read the article? Ben specifically used the photos to point out Ortiz being in better shape and changes he mad in his of hitting mechanics. The article also pointed out statistics that showed Ortiz has changed his approach.

Have a great weekend.
Reply to BurrRutledge
SpaceJohnson
Many people scoffed when the Angels changed their hitting coach, but it very well could be that Albert needs to change his approach the way Papi did. If his bat speed really is slowing, then he perhaps needs a new timing mechanism in his swing to compensate. Also it would be really interesting to see if there is some correlation between aging power hitters and a crouched vs. upright stance, and what type of timing mechanism they used.
Reply to SpaceJohnson
touchstone033
Great article. There's been some talk, too, that Adrian Gonzalez has had a positive effect on Ortiz. I'd be curious to see if some of Papi's new hitting habits are similar to Gonzo's...
Reply to touchstone033
rogercfr
I've always thought that the recovery from the wrist injury was an underrated factor. Wrist injuries obviously can kill your bat speed. It's not uncommon for players to take a full year to fully recover. Some like Carlos Pena, and Nomar Garciaparra never fully recover.

Reply to rogercfr
zstine1
great article. I wish the steroids era didn't make me think there was a new Balco every time a 30-something player bounced back.
Reply to zstine1
drawbb
I often review articles en masse months later, so please forgive my tardiness at commenting...but if Ortiz has indeed lost weight it isn't apparent to me from those photos. The stance, no question.
Reply to drawbb
bornyank1
Whether it was obvious from the photos or not, he's definitely a good deal slimmer.
Reply to bornyank1