It was announced last week that a group of fans from around the country are suing Major League Baseball and its partners over the way broadcast rights are enforced, alleging an abuse of monopoly power. From the AP report:

A small group of baseball fans is suing Major League Baseball, its clubs and some television broadcast entities, claiming that they collude to eliminate competition in the showing of games on the Internet and television. … The lawsuit said the defendants possess monopoly power over the market for video presentations of major league baseball games and have used the power to exclude or limit competition.

As Craig Calcaterra of Hardball Talk points out, this lawsuit doesn't have much of a chance in the courts today. Things were a bit different in 1950, however, when the Springfield Cubs, in their first year as part of the International League, tried to enforce territorial rights granted them by Major League Baseball.

In the years prior to the 1950 season, Major League Baseball found itself under investigation from the U.S. Justice Department about complaints "from radio stations about 'unreasonable constraints' caused by" the existing rules. After the two-year investigation, baseball commissioner Happy Chandler agreed to "liberalize" radio regulations. One of these new rules stated that "no station within 50 miles of a park in organized baseball may broadcast or televise a 'foreign' game while a contest in in progress in the park." Essentially, it was a blackout rule for other clubs.

In April 1950, less than six months after the new regulations were put into effect, the Springfield Cubs, Chicago's new AAA squad playing their home games in Springfield, Mass., decided to enforce that rule. This meant that, on nights when the Cubs were at home, no one living within 50 miles of Springfield—an area that covered almost the entireties of Western Massachusetts and Connecticut, extending from New York State on the west to Rhode Island on the east—would be able to listen to other ballgames on the radio, including Boston Red Sox and Boston Braves games. As you can imagine, this ban didn't go over too well with radio stations or fans. 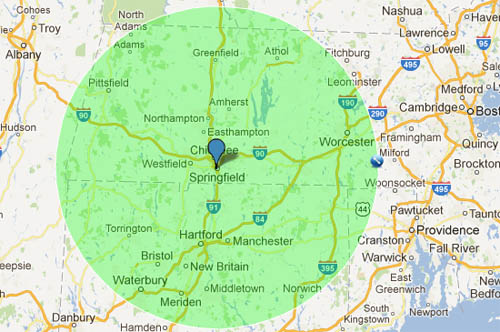 Almost immediately, one West Springfield station announced that they would ignore the ban. Massachusetts Congressmen Foster Furcolo and Antoni Sadlak even brought the dispute to the House of Representatives and the Justice Department. A state representative also issued a resolution in the Massachusetts house asking the FCC to intervene.

In the immediate aftermath, the Cubs and one of their lead sponsors "graciously" agreed to waive their territorial rights on one condition: "that the names of sponsors of the Boston Braves and Red Sox broadcasts … not be mentioned. The games … would have to be broadcast solely as 'a public service.'" Surprisingly, that offer was not enough.

The ban didn't last long. Following a 24-hour investigation from Chicago Cubs owner Philip K. Wrigley and presumably under the pressure of outraged fans and the threat of a federal court hearing, the Cubs dropped their ban less than a week after it was announced. The club's sponsor "welcomed any and all Major League broadcasts on a commercial basis," team president Jack Sheehan said. The Commissioner's Office also clarified its view on things, saying that minor league clubs can "throw down the bars [on the 50-mile territorial limitation] and let anybody in with baseball broadcasts" that they want. They were quick to point out, though, that the Commissioner could see "no prospects of doing away with the territorial rights that are still retained by the minor leagues."

As today's case against Major League Baseball makes its way through the legal system, it's nice to be reminded of how these territorial issues have been in dispute for over 60 years. It's probably safe to say that they're not going away anytime soon.