Pitching mechanics tend to dominate the word count here in Raising Aces, so it may surprise some readers to learn that my favorite element of pitching is “stuff.” Nothing lights me up like blazing heat, baffling change-ups, and exploding sliders that paint a catcher's target. Some pitches are so devastating as to take on a personality of their own, effectively defining a player's legacy, such as the cutter of Mariano Rivera or the change-up of Johan Santana. There are even pitches that are so legendary that their reputations have survived the passage of time, to be appreciated by people who never personally witnessed their glory, including Walter Johnson's eye-blink heater and Sandy Koufax's knee-buckling curve.

The quality of a pitcher's stuff is intertwined with his mechanics. Pitch velocity is determined by kinetic energy that is transferred through linear momentum, torque, and the rotational elements of the delivery. Pitch command is directly tied to the consistency of mechanical timing and sequencing, in addition to dynamic balance and posture. The key ingredient to pitch movement is also rooted in mechanics, and though a pitcher's grip on the baseball tends to steal the spotlight, the more critical determinant of pitch break is the angle of the pitcher's forearm at release point.

To succeed at the highest level, a starting pitcher should possess command of three pitches: a fastball, a pitch with movement, and an offering that is off-speed. Tim Lincecum threw five different pitches during his start against the Mets last week (according to the database at Brooks Baseball), including two variations on his fastball, plus a couple of breaking balls and a splitter to keep batters off-balance. There was a segment during the telecast in which Lincecum demonstrated the various grips of his pitches, including a cutter grip that failed to make an appearance on the PITCHf/x ledger for the game. Let's follow Timmy as he takes us on a virtual tour of his repertoire. 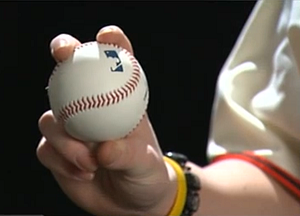 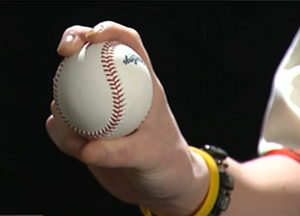 The one detail that virtually every pitch grip has in common is that the thumb and middle finger bisect the baseball. Lincecum demonstrates this technique on both variations of his fastball, with the index and middle fingers wrapped across the seams for the four-seam heater (left), and the two-seamer (right) distinguished by a grip along the seams at the sweet spot of the ball. Giants announcer Mike Krukow, who knows a thing or thirty about pitching, describes the two-seam fastball as requiring extra pressure on the index finger, a technique that helps a pitcher to produce the pronation necessary to give the two-seamer its characteristic arm-side run.

On a typical fastball, the palm of the throwing hand will face the target at the moment of release, with pronation occurring naturally during the follow-through portion of the delivery. During the pronation phase, the throwing arm rotates until the palm faces outward and the thumb points toward the ground. Pronation occurs during follow-through for every pitcher and on each type of pitch, but there are some pitch types that require a degree of pre-set pronation. The two-seam fastball is the first step in that direction, and a pitcher who puts pressure on the index finger will create weak pronation on his two-seamer, with the palm turned slightly outward at pitch release. 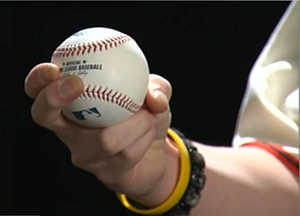 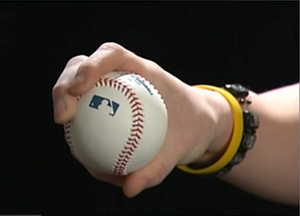 The Freak's curve ball grip (left) involves finger-placement similar to his two-seam fastball, relative to the stitches, but the glaring difference is a forearm that is supinated relative to the fastball position. Supination is the opposite of pronation, and a fully-supinated breaking ball will take on a karate-chop position with the palm facing inward at release point. The forearm angle is also behind the movement of Timmy's slider (right), with a degree of supination that lies somewhere between the fastball and curve ball, a distinction that underscores the functional impact of the technique. The general rule is that increasing supination will lead to lower velocities and greater break. The hierarchy of breaking pitches follows a path of increased supination, from fastballs to cutters, sliders, and curves (including hybrids such as slurves and slutters).

The curve ball involves the greatest degree of supination at release point and thus requires the most pronation during follow-through, placing greater effort on the execution of the curve. That said, the supinated curve is much safer than the method that I was taught in Little League, which involved twisting the wrist near pitch release as if I was spinning a top. My coach described it as “throwing a Pringles can, end over end.” The twister curve is extremely dangerous, as one can detect the additional forces by feeling just above the inner elbow while twisting the wrist like a combination lock. In addition, such a motion complicates the pronation process, as the wrist recoils while the arm decelerates.

The twister curve is particularly concerning for developing arms and is part of the reason for the recent regulations concerning curve balls in Little League. The other problem is functional—a twisted curve ball can have a loopy break that looks impressive from the stands, but it will also leave the throwing hand at a different trajectory than fastballs and supinated curves. Major-league hitters can identify the pitch quickly enough to make adjustments, and only those curves with exceptional depth and spin can survive in the bigs. On the other hand, a supinated curve ball carries the deception of a fastball exit trajectory before falling off the table, making it more of a threat to big-league bats.

The Change of Pace 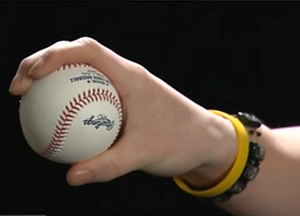 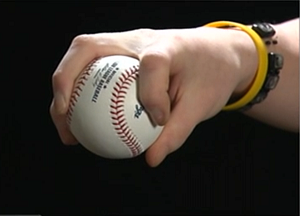 True to form, the supination angle of Lincecum's cutter lies somewhere between that of his fastball and slider, with just a slight tilt from a straight-forward fastball position. In theory, a pitcher can find several breaking-ball variations with respect to velocity and snap by toying with the angle of supination, and players such as Yu Darvish are able to add or subtract from velocity and break by adjusting the position of the forearm to create a handful of distinct breaking pitches. The difference between Lincecum’s cutter, slider, and curve ball is measured in degrees of supination.

Timmy's only off-speed offering is a splitter, for which he uses a claw-like grip with index and middle fingers spread outside the seams at the top of the horseshoe. Often labeled as a change-up, what distinguishes Lincecum's split from a traditional cambio is the lack of early pronation, with a fastball forearm-angle when the splitter comes out to play. In this case, the decreased velocity comes from a deep grip that increases the frictional forces between the pitching hand and the baseball. A typical change-up will involve pre-set pronation that goes beyond the two-seam fastball, with pitchers utilizing myriad grip patterns such as the circle-change in order to get a feel for the proper forearm angle. The change-up is a “feel” pitch that some pitchers struggle to capture, making it one of the toughest pitches to harness consistently.

Quick quiz: What pitch is Roy Halladay throwing in the picture on the left? On the right?

In the end, it all boils down to semantics. Dan Haren throws a cutter that looks more like a typical slider, but I would not question Haren's choice of nomenclature, as he is the one with an intimate connection with the pitch. A pitcher's pet names for the arrows in his quiver might defy our commonly accepted archetypes of a pitch, but the labels are completely dependent on the player. Mechanically, a cutter is defined based on the pitcher's relative supination angles on his slider and fastball, but his own choice of terminology could come from grip, feel, velocity, trajectory, or the response that the pitch elicits from dejected batters as they walk back to the dugout.

At the National Pitching Association, we would advise pitchers to name their offerings based on the preferences of scouts and coaches, as there are certain pitch combinations that are viewed as favorable within the community of baseball evaluators. Often, a curveball would be re-dubbed a “power slider” in order to give a particular impression, and I have witnessed scouts who will grade a pitch based partly on the expectations created by the name attached to the offering. A player can name his slider “rosebud” for all I care, as long as it gets results.

You need to be logged in to comment. Login or Subscribe
bmd838
Great stuff! I love the addition of the mechanical and scouting information to BP.

Reply to bmd838
bobbygrace
I would add that I love seeing pieces on BP that have a "how to play baseball" angle. I realize that's not generally what BP is all about, but any article that breaks down the mechanics of the game has added benefits for anyone interested in teaching kids how to play. So thanks!
Reply to bobbygrace
buffum
Very informative and a great use of photos.
Reply to buffum
delorean
Doug, your piece are like being taken to school, only instead of being stupid and boring, it's informative and awesome.
Reply to delorean
eighteen
More, please.
Reply to eighteen
nickojohnson
Great article. Only suggested improvement would have been to include GIFs of Lincecum throwing each pitch noted above. Would be awesome to see a real life example of each pitch after the explanations. The forearm will be supinated at release point on breaking pitches, and then the arm will pronate naturally after the ball leaves the hand. I have never actually seen a pitcher that supinates the arm after release point.
Reply to tombores99
ddufourlogger
This sort of in-depth analysis is what has been missing from BP for years. LOVE IT. MORE please!
Reply to ddufourlogger
evancon
This article is just the best. Pitching is my favorite thing in the game, and I can't get enough of the mechanics of it. This stuff is why this site is worth every single penny.
Reply to evancon
JoeLyons1
Not just from a coach's viewpoint, but from a fan's perspective, I want to be astute enough to look at a close up of a pitcher's grip and be able to identify the upcoming pitch.
My goal is to get to a place where I can call the game in my head and listen to the natural sound of the ballpark's audio feed on MLBTV.
Reply to JoeLyons1