Looking at leaderboards in April is a lot like looking at a familiar face reflected in a funhouse mirror: some features are clearly recognizable, but others are badly distorted. Matt Kemp leads the league in almost everything, which makes sense. Look a little harder, though, and oddities start to appear. Jack Hannahan, a career .235 hitter, is batting .308. If Jack Hannahan is still batting .308 at the All-Star break, we’ll have to start paying attention (and possibly packing away survival supplies). Until then, it’s safe to dismiss Hannahan’s hot streak as a small-sample fluke.*

*Very, very safe. When I first wrote that sentence, Hannahan was hitting .364.

But not all early-season statistics are illusions. Some stats stabilize more quickly than others, and the more innings and plate appearances players accrue, the more signal we start to see amidst the statistical noise. It’s even easier to spot a meaningful change when a player does something he’s never done before, like learn a new pitch or adopt a different delivery or batting stance. As tempting as it is to dismiss anything that happens in April as the product of a small sample size, it’s not too early to pinpoint a few players whose performance is attributable at least in part to a conscious change in approach.

Ichiro Suzuki, Mariners
Three things are true about Ichiro this season that haven’t been true about Ichiro before: he’s 38 years old, he’s batting in the middle of the order, and he’s coming off a season in which he hit under .300. In response to one or more of those developments, Ichiro has altered his approach in 2012. As Jeff Sullivan observed earlier this month, Ichiro has moved back in the box. It’s possible he’s trying to compensate for slightly slowed reaction time, though he might also have done it in order to give himself a better chance to pull the ball with power. Sullivan subsequently noted that Ichiro is swinging far less often at pitches off the plate inside, the ones that gave him the most trouble last season. That might be mostly explained by another shift in his stance: in addition to moving away from the pitcher, Ichiro has inched toward the plate. Last April, Ichiro occupied a roughly centered horizontal position in the batter’s box, but this April, his back foot is nearly touching the inside border. 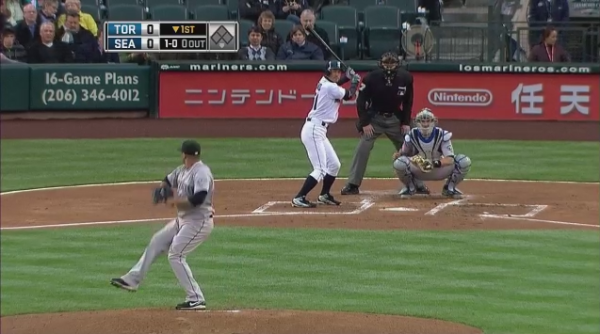 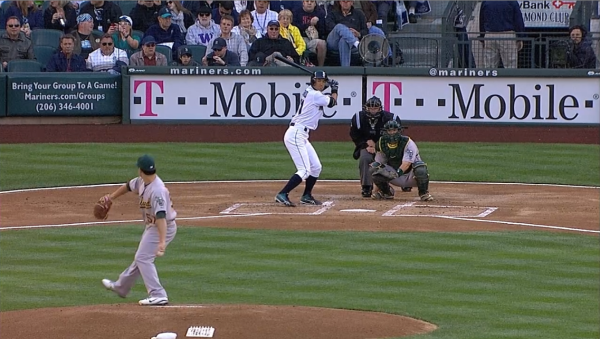 Swing rate is one of the quickest stats to stabilize: while what happens to a ball after it’s put in play is largely out of the batter’s control, the decision to swing is largely self-determined. As a result of the new stance and swing rate, we can be fairly confident that there’s a change in approach behind Ichiro’s change in performance. The latter change has been dramatic: Ichiro has experienced the fifth-biggest boost in line-drive percentage and the biggest boost in groundball percentage of any batter this season, to the point that he’s now hitting grounders at barely above the league-average rate, after profiling as an extreme groundball hitter ever since entering the league. Ichiro’s quickness turned many of his grounders into infield hits, so it remains to be seen whether keeping the ball off the ground will help him. However, if his foot speed is eroding more quickly than his bat speed, driving the ball might be a more sustainable path to success.

Jason Hammel, Orioles
If a pitcher is planning to develop a sinker at some point, “while pitching in Coors Field” would seem like the best time to do it. For whatever reason, Jason Hammel waited until he was no longer on the Rockies to add the pitch to his arsenal, but belated as its debut might have been, it’s paying dividends now.

Hammel’s 45.7 percent groundball percentage was the 38th lowest among the 95 starters with at least 160 IP last season. At the urging of Orioles pitching coach Rick Adair, Hammel started throwing the sinker in the second half of spring training, and he hasn’t stopped since, delivering it 35 percent of the time. That pitch has induced the highest rate of grounders of any of his pitches, and his overall groundball rate has climbed to 61.8 percent, which ranks fifth among all pitchers who’ve thrown at least 20 innings. He took a no-hit bid into the eighth against the Twins in his first start, and after four outings, he has a 1.73 ERA, not to mention nearly a strikeout per inning. Here’s a clip of Hammel using his new toy to break Edwin Encarnacion’s bat and get another grounder in Wednesday night’s 3-0 win over Toronto:

Will Hammel continue to rank among the top 10 pitchers in groundball percentage? Not necessarily. Will he keep his ERA under three? Almost certainly not. But Hammel does have a new weapon at his disposal, and we have a new reason to expect success.

Zack Greinke, Brewers
Greinke was one of the best pitchers in baseball before this season, so he didn’t need a new pitch like Hammel did. He added one anyway. Greinke picked up a cutter this spring and has thrown it 22 percent of the time, more often than he’s used any of his off-speed pitches. While the pitch hasn’t generated many misses, it gives batters six legitimate weapons to worry about when facing Greinke, and it has induced plenty of weak contact. Nine of 15 cutters put in play have been hit on the ground, which helps explain Greinke’s career-high 50.8 percent groundball percentage. Here’s what the pitch looked like tying up Brian Bogusevic inside in Greinke’s most recent start:

Danny Duffy, Royals
Duffy struck out well over a batter per inning in Triple-A last season, but he surrendered roughly three strikeouts per nine innings following his mid-May promotion. In his first three starts of 2012, he’s struck out batters at a higher rate than he did in Omaha, and some of those additional swings and misses can be traced to the cutter that has replaced the slider he occasionally threw last season.

Duffy learned the cutter from former Royals (and current Red Sox) pitching coach Bob McClure last season and refined it over the winter. The pitch, which Duffy has thrown almost exclusively down and in to lefties, has a sweeping break, making it more of a “slutter” than a true cutter. The sample size is still tiny, but almost a third of the cutters Duffy has thrown thus far have resulted in whiffs, easily the highest rate of any of his offerings. One of those whiffs came courtesy of Colby Rasmus in Duffy’s start against Toronto last Sunday:

Further Duffy developments will have to wait at least until next week against Detroit, since the lefty was scratched from his Friday start due to elbow tightness that isn't believed to be serious.

Barry Zito, Giants
Zito entered this season in dire need of a new approach after reaching his nadir in 2011. Necessity is the mother of invention, and Zito’s invention is a revamped slider that has quickly become a key component of his repertoire. Zito has thrown a slider before, but never more than 19 percent of the time. Last season, only 8 percent of his pitches were sliders. In 2012, the slider has become his most-used pitch, accounting for 29 percent of his offerings.

It’s not just that Zito is throwing his slider more often this season, though. As Grant Brisbee noticed, this simply isn’t the same slider we saw from Zito two seasons ago. In 2010, Zito’s slider moved over twice as much, boasting over six inches of horizontal break. This season’s model is much straighter, averaging less than three inches of horizontal movement—in his start on Wedneday night, he appeared to throw a harder version of the pitch with even less movement to lefties. The evolution of the slider is easy to see in the following two pitches to Prince Fielder (2010) and Josh Harrison (2012):

Through four starts, including a shutout effort in Colorado, Zito has recorded a 1.67 ERA. Since his surprising improvement has coincided with a heavy reliance on the remodeled slider, it’s difficult to avoid drawing a connection between the two. However, while the slider has met with great success so far, the underlying outcomes of the pitch haven’t been particularly impressive: its movement and lackluster whiff rate don’t suggest a wipeout pitch. Zito still doesn’t get strikeouts and throws slower than any non-knuckleballer not named Jamie Moyer. In his case, it’s probably not a new approach that’s buoying his numbers, but a .188 BABIP that won’t be that low for long.

You need to be logged in to comment. Login or Subscribe
lloydecole
Good stuff. Thanks.
Reply to lloydecole
Schere
picture/video worth thousands of words...thanks.
Reply to Schere
meanwhoogean
Articles like this are why I love this site!
Reply to meanwhoogean
rjblakel
+1 for GIFS !
Reply to rjblakel
cbal316
That was awesome, wanted to comment so you know this is what we want from this site!!!
Reply to cbal316
bishopscreed
No Pujols.

Reply to bishopscreed
bornyank1
Sam said all there was to say about Pujols in his piece from last Tuesday, so I left that alone.
Reply to bornyank1
granbergt
Would it be possible to have links to the .gifs, rather than having them in-text? It's extremely hard to read with all of that movement cluttering the page. I do appreciate the illustrations, though!
Reply to granbergt
bornyank1
Tynan, if you're using a browser other than Chrome, you can hit your escape key to pause all the GIFs on the page. Then you can right-click on the image and go to "Properties" to see the direct link to the image.
Reply to bornyank1
hotstatrat
I can't read this with all that distracting video. When two endlessly looping videos are happening less than a page's length apart there is no scrolling to avoid then. Someone suggested a work around, I think it was saving it as a PDF, but no right click option allowed me to do that. Any help out there?

Ben, is there some reason you can't make those videos we can start or stop ourselves?
Reply to hotstatrat
bornyank1
Hoot, GIFs don't work that way, unfortunately. However, you can stop them in most browsers. See my response to Tynan above.
Reply to bornyank1