which counts as a pitch in my book. Which makes it a 50-pitch inning for Jon Lester. Fifty pitches got Jon Lester into the sixth inning of this 2010 game, and it got him three outs against Texas on Tuesday night. Fifty pitches takes nearly a half hour. It takes in the neighborhood of 15 authenticated baseballs to get through 50 pitches. Fifty pitches is how many times Christopher Nolan had to explain Inception before anybody got what he was talking about. Fifty pitches is a profane amount of pitches.

I listened to this game, and as I did, I wondered how Lester was holding up as the pitches piled up. Specifically, I wondered about the following:

As it turns out, some things change over the course of 50 pitches, and some things don’t.

Lester’s velocity stayed the same. As you read in the first sentence, his final pitch of the inning was 94 mph, which was actually the fourth-fastest pitch he threw all inning. Here’s a velocity chart for all his fastballs. It includes both two- and four-seamers, so it’s not perfect, but there’s not much, if any, velocity difference between Lester’s two- and four-seamers. 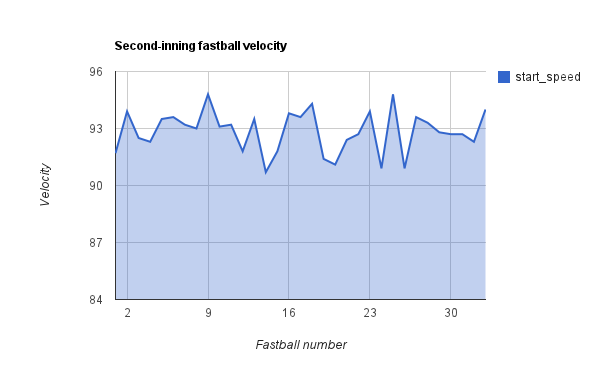 It’s reasonable to think it was taking Lester more effort to keep that velocity. He kept the first 20 pitches of the inning low, then let a very high fastball get away from him on the 21st. That was followed by high fastballs on pitches 36, 47, and 48. But Lester kept his velocity, through 50 pitches.

He mostly kept his control. Of his final 20 pitches, 15 were strikes. And he did manage a 12-pitch at-bat against Adrian Beltre where he lived pretty consistently on the edge, or just off the edge of the strike zone: 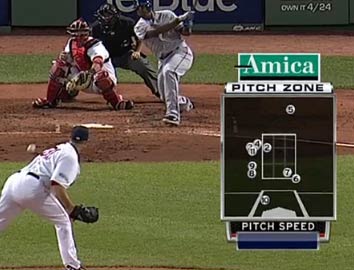 I'm not even going to get into the issue of command.

Lester’s pace stayed the same. Again, it’s hard to conclude anything definitive, because the time Lester took to throw a pitch included a bunch of variables: whether the previous pitch was fouled off, whether there were runners on base, whether the batter took longer to adjust his gloves or get signs, etc.  But when Lester faced Michael Young, the 10th batter of the inning, he took 26 seconds between pitches. When he faced Mike Napoli, the third batter of the inning, also with runners on, he took 27 seconds between pitches, and when he faced Craig Gentry, the fifth batter, and Ian Kinsler, the sixth batter, both with runners on, he took 26 seconds per pitch. An exception is Lester’s 12-pitch matchup against Adrian Beltre, during which both players slowed way down. Approximate time between pitches: 19 seconds, 24, 29, 46, 31, 36, 47, 33, 35, 29, 47, for an average of 34 seconds per pitch.

The catcher's set-up and the umpire's set-up didn't change. I thought they would, thought their stances would start to sag after 30 or 40 pitches. But we've got a couple of pros here. Pitch No. 8 on the top, and No. 49 on the bottom. 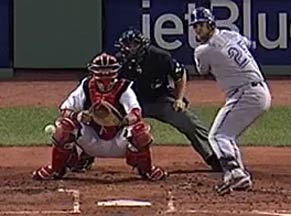 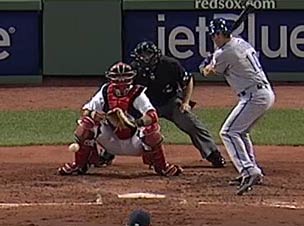 The second-base umpire, meanwhile, did get tired. Here he is for no reason being all, "hate this, let's go." Lester’s mechanics changed. His leg kick began to vary, for instance, even when there was no need to worry about baserunners trying to steal: here are two GIFs, with an early pitch on top and a late one on the bottom: And since I'm hopeless when it comes to mechanics, here is what our Doug Thorburn said about the inning, which he watched, and these two pitches in particular:

The "early" pitch is well-timed with solid balance and a glove that stays in front of the body, and Lester paints the target. The "late" pitch lacked the balance of the early one, with his head trailing his center-of-mass into foot strike. Meanwhile, the glove-arm flops lazily to his side on his follow-through. But the main symptom of the missed target is late initiation of trunk rotation, and his arm fails to catch up to the body, this despite the fact that his stride timing looks pretty similar.

I thought that Lester was really unlucky at the start of the second inning, barely missing his targets and watching batters hit some quality pitches, with no help from the defense. But Lester was exhausted by the end of the second, having thrown something like 49 pitches (an insane count)—the 12-pitch foul-a-thon with Beltre was just torture to watch—and the "late" GIF does a great job of exemplifying how mechanics can suffer as a pitcher fatigues. 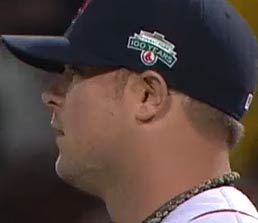 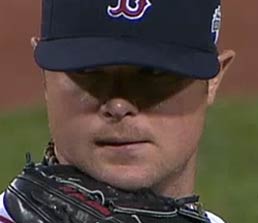 No sweat in the first one. Also notable: Lester Sweat and Lester's Wet are homophones. Notable is probably the wrong word there.

Stage one: watching the game. 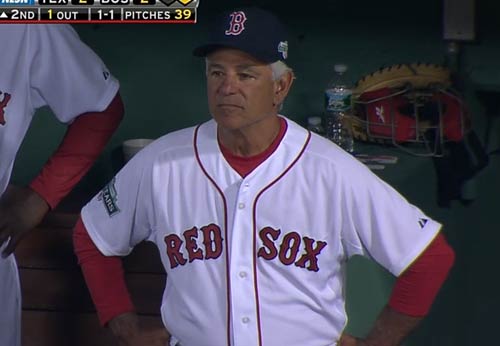 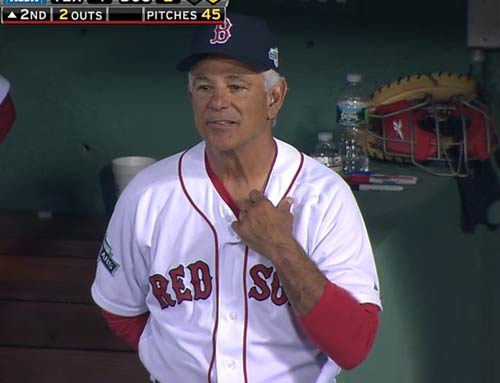 Stage three: watching not the game. 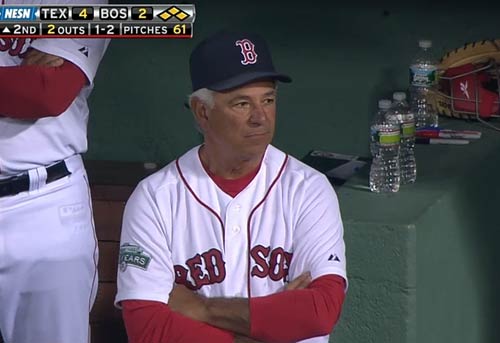 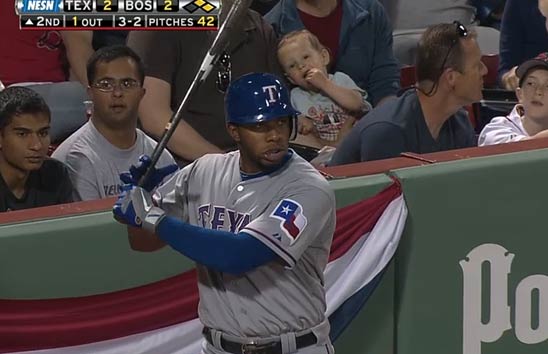 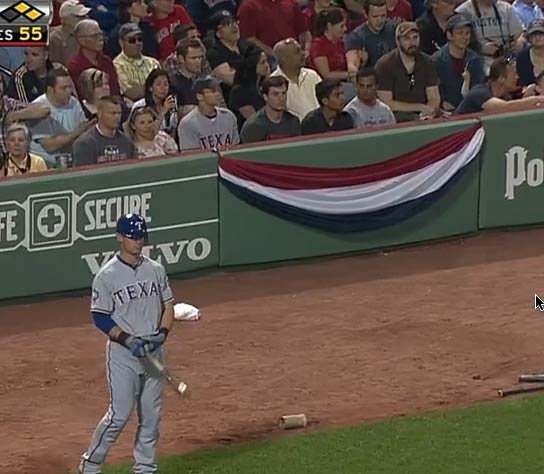 Where did he go? Where do you think he went? Did he go somewhere amazing, like a palace in his own kingdom? Or did he go somewhere terrible, like the inferior seats that his parents actually paid for? Or was he just a hologram all along? We’ll never know.

You need to be logged in to comment. Login or Subscribe
Tythelip
I can see the kid's arm.
Reply to Tythelip
lyricalkiller
Oh my gosh this is worse than I thought.
Reply to lyricalkiller
bb10kbb10k
This series has become a real highlight of my life here on this planet. Very good.
Reply to bb10kbb10k
apbadogs
The kid was thrown under the guys seat next to the first guy...you can see his arm as he claws his way back to freedom.
Reply to apbadogs
bensonq
Good stuff, funny.
Reply to bensonq
mbsmith76
Sam, I'm really enjoying your writing and your contributions to the site. Keep up the great work!

I, too, am concerned about the poor child and the concrete floor monster that clearly must be devouring him in the second photo. Taxpayers should not have to fear such a fate in publicly-financed stadiums!
Reply to mbsmith76
onetimeforall
I'm not sure enough credit is being given to the umpire .GIF. He even has a bit of Scioscia face.
Reply to onetimeforall
beastjunior
I'm pretty sure Derryl Cousins is crop dusting in that shot.
Reply to beastjunior
lewish
You have got to be joking!...right?...Thorburn, really didn't look at those 2 pitches and analyze that many differences...did he?...from that angle only?...If he did I can't even come close to evaluate pitching at all...which is unfortunately probably true, and very uncomfortably humbling...it is part of the humor...correct? Please say yes. By the way nice article.
Reply to lewish
lyricalkiller
Email I got this morning: "Thorburn is a warlock." So awesome at what he does.
Reply to lyricalkiller
lewish
Oh, that hurts!
Reply to lewish
shmooville
I don't know why I'm laughing, first at the missing kid, and secondly at his now apparent arm, but it's making me cry.
Reply to shmooville