The allure of Opening Week is finally gone. While some teams are still celebrating (or awaiting) their home openers, others are already back to midseason form. In Houston, 17,095 paid to see the hometown boys beat the Braves. In Oakland, the stellar Royals/A's matchup only brought out 10,054 paid attendees. One of those is bound to change on Tuesday, as the Astros plan to hold their first throwback game of the year. In honor of their 50th anniversary, the team will be wearing old Houston Colt .45s jerseys, smoking gun and all. 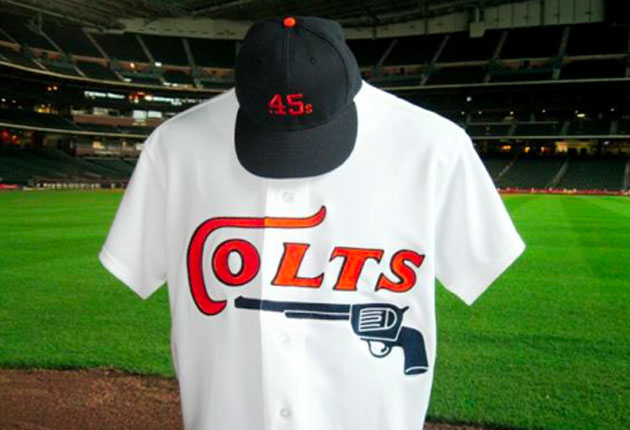 If that doesn't bring folks out to Minute Maid Park, I don't know what will. In the meantime, let's get to the trots!

Home Run of the Day: Pablo Sandoval, San Francisco Giants – 22.54 seconds [video]
For the second time this season, the Cardinals hit three home runs in one inning, lighting up Cincinnati's Homer Bailey in the first inning. That feat might be enough for Home Run of the Day if it wasn't for Pablo Sandoval's entertaining celebration. As Carson Cistulli notes, that's not one or two celebratory gestures for the Panda, but four! Hey, if it works…

Slowest Trot: Bryan LaHair, Chicago Cubs – 25.12 seconds [video]
On a night when the wind was whipping out of Wrigley Field, it really looked like there was going to be a slew of home runs hit between the Brewers and Cubs last night. In the end, though, only three were hit out, one of which was barely caught by the chain-link basket in left field. LaHair's bomb, on the other hand, had no such problems clearing the fence. In fact, the first home of the year for LaHair found its way easily onto Sheffield. Meanwhile, LaHair took slow, small steps as he circled the bases, giving us the slowest trot of the night.

At 18.29 seconds, Boston's Dustin Pedroia wasn't much behind De Aza for the quickest trot. Omar Infante and Darwin Barney had pretty nice trots of their own.