This is something called an Annotated Box Score. It's a bunch of items that come out of one game. This game was between the Angels and Royals on Friday night, though it applies to the entire weekend. Four items today: Jeff Francoeur and a fantastically inside pitch; the Angels' depth and the problems it creates; Kendrys Morales' left-foot toe tap; and Mike Sweeney eating a banana. Scroll on down, now. 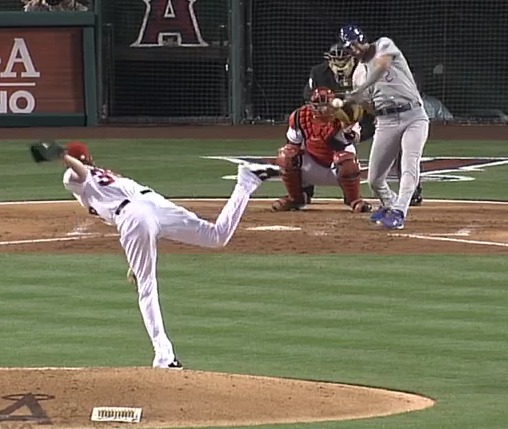 This pitch was 1.965 feet from the center of the plate, which is to say that pitch was more than 15 inches inside. Carlos Quentin saw 13 pitches that far inside in 2011 and was hit by eight of them. Carlos Quentin was hit by 15 pitches in 2011 that were less inside than that pitch. If you were a major-league hitter and pitchers threw only pitches that were 1.965 from the center of the plate, you’d have a 1.000 on-base percentage and be deceased. Jeff Francoeur does not have a 1.000 OBP on such pitches.

Even by Francoeur standards, it was a heck of a groundout. Since the start of 2010, Francoeur has “swung” at only three other pitches that were that far inside, with “swung” in quotation marks because twice those pitches hit his bat while he ducked out of the way. (That suggests that Jeff Francoeur, even when in danger, even when ducking for his life, subconsciously wants to swing. If Jeff Francoeur were in a coma, they would never end life support because there would always be faint brain activity. "Swing, dummy, swing," the gray matter would be screaming.) The third pitch that he swung at that was as least 15 inches inside was a swinging strike, about a half-inch further inside than the pitch you see above. In 2009 and 2008, he never put a ball in play that was so far inside. So this is as far inside as Francoeur has ever hit a pitch in the PITCHf/x era. Yay. 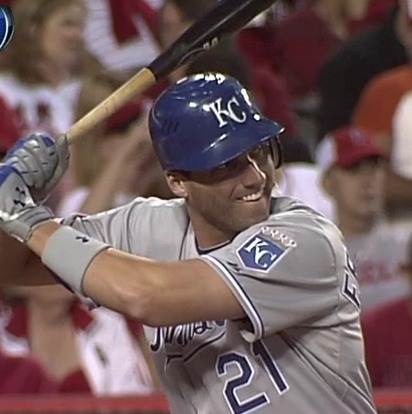 The Angels might have too much bench. Mark Trumbo is on the bench, and nobody with the Angels wants Mark Trumbo to be on the bench, so they’re trying anything they can to get him off the bench. Friday and Sunday, that meant playing him at third base, his first professional games at the position. It went like this:

And a third error on a grounder on Sunday. There was also a bunt single at him. He did convert three outs in the two games: a pop-up, a line drive, and a groundball at him. But it was hard to watch.

"I'd be lying if I said otherwise," Trumbo said Saturday when asked if his confidence was shaken a bit. "It's not that I don't have confidence in myself, but I know how hard the pitchers work to get outs, and any time you don't pick them up, I feel as bad as anybody.”

Bobby Abreu is also on the Angels’ bench, and Bobby Abreu really doesn’t want to be on the bench, so the Angels are trying anything they can to get him off the bench. Saturday, that meant playing Bobby Abreu in left field, which meant moving Vernon Wells to center field.

Fielding metrics disagree on the degree to which Bobby Abreu is a poor defensive outfielder, but they all agree that he is one. Over the past three years (2,500 innings), he has cost his team somewhere around a run every 120 innings:

There’s no agreement on Wells, but on average the metrics considered him around average in left field in 2011 (930 innings):

And there is a near consensus that Peter Bourjos has been somewhere between very good and historically good. In his career (1,700 innings):

Displaced third baseman Alberto Callaspo, meanwhile, saved the second-most runs in baseball at third base in 2011, according to FRAA. While Mark Trumbo, God bless him, really rooting for him, has never played a professional game there.

Sacrificing defense—even a lot of defense—might make sense if Trumbo and Abreu were significantly better hitters than Alberto Callaspo and Peter Bourjos. But while Trumbo and Abreu are good enough to play for other teams—well, Trumbo certainly is, at least—they’re not really better hitters than the players they displaced in the Angels' lineup. Abreu’s TAv in 2011 was .275; Bourjos’ was .282. Trumbo’s was .278, and Callaspo’s was .273. Callaspo was better than Trumbo against lefties last year (and throughout his career), and Bourjos was barely worse against righties than Abreu, so there’s not even a clear platoon edge.

There aren’t many things we can learn about a team in one series. But we learned something about the Angels in this series, and it’s that there is a dense thicket of players that Mike Scioscia wants in his lineup. Which means Mike Trout—.500/.579/.563 in four Triple-A games—has a lot of obstacles ahead of him, and none of them is a Triple-A pitcher.

Kendrys Morales got a standing ovation on Friday night and went on to get hits in five consecutive at-bats on Friday and Saturday, all from the left side. Morales has always hit well from the left side, but from the right side, he’s been Yuniesky Betancourt, with a .255/.283/.400 career line. His 2009 success owed plenty to a huge mid-season improvement against lefties, as he replaced a big leg lift with a slight toe tap, shortened his swing, started hitting changeups for the first time, and crushed left-handed pitching for a .365/.383/.649 line in his final 74 plate appearances against them.

Then, in 2010, before the broken-leg thing, he was terrible against lefties again. So.

He faced Bruce Chen twice Friday, and the second trip was encouraging. Morales still has the controlled swing from the right side, and he looks as though he has added a bit more load since 2009. May 2009 on the left, August 2009 in the middle, Friday night's game on the right: 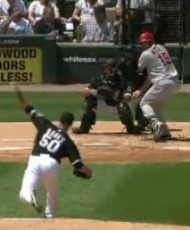 In his second at-bat Friday, he hit this pitch

to the wall in right-center. It was an out, because that’s the hardest place in Angel Stadium to hit a home run, but with five extra feet of carry in a day game it might have been extra bases. Keep betting the under, but that’s a start. 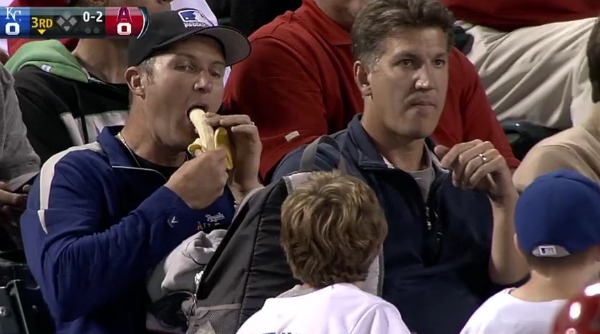 If you are likely to be in a situation where you are eating a banana on television, there are some practical tips to follow:

More tips for how to eat a banana.

You need to be logged in to comment. Login or Subscribe
delorean
This single article was worth my $39.95 annual BP sub. Everything after this is pure lagniappe.

Thanks for the lulz.
Reply to delorean
jstnbsn
I finally subscribed because of this article haha
Reply to jstnbsn
delorean
Good man!
Reply to delorean
bornyank1
Welcome to BP. Thanks for signing up.
Reply to bornyank1
bhalpern
Better get this young star signed to a long-term extension before he becomes arbitration eligible!
Reply to bhalpern
km9000
We got to (freely) enjoy his stuff in the Orange County Register before he made it to the big time here, and it's nice to his work more widely appreciated. I think the blog post that got the most reaction was when he wrote a faux Jay Leno monologue dedicated to Jeff Mathis. It sparked much outrage. And confusion from those who couldn't remember Leno actually cracking wise about Mathis. But Kevin liked that one...
Reply to km9000
saigonsam
Go back and read "Watching the Worst Game of 2011", and instant classic.
Reply to saigonsam
Dodger300
Excellent call, SaigonSam.

All I can say is don't read "Watching the Worst Game of 2011" at work. I almost got myself fired when everyone heard me snort coffee through my nose after seeing this:

"Entertaining Moment No. 5: Umpire being scared as all get out that Don Kellyâ€™s going to let a pitch smack him in the thing."
Reply to Dodger300
onetimeforall
What if you ate a banana like corn on-the-cob?
Reply to onetimeforall
lyricalkiller
I eat it like a beaver working on a big tree: gnaw on the middle and work upward. I think what's notable about Sweeney is that he uses both hands. Most people don't use their free hand to support the banana. Mike Sweeney does.
Reply to lyricalkiller
onetimeforall
I feel like the hatless kid in front of Mike Sweeney is fascinated by the use of both hands. If there were a photograph shot from the opposite direction, I picture that boy's face being a perfect display of wonderment. He probably went home and ate a banana with two hands and his mom whispered to his dad, "why is he eating a banana with two hands?"
Reply to onetimeforall
jamesman
i like his hat though. what is that?
Reply to jamesman
NumberPower
I will never think of Frenchy the same way again. Another awesome piece by my new favorite baseball writer.
Reply to NumberPower
timber
I can't imagine using a fork and a knife to eat a banana.
Reply to timber
lyricalkiller
Helpfully, Miss Manners has addressed this topic:

http://news.google.com/newspapers?nid=1320&dat=19850607&id=IDxWAAAAIBAJ&sjid=tekDAAAAIBAJ&pg=4553,2203386
Reply to lyricalkiller
delorean
http://www.youtube.com/watch?v=UxB-H6f3crY
Reply to delorean
mattymatty2000
I bet Jeff Francoeur would eat the [expletive] out of that banana.

Love it.
Reply to mattymatty2000
lyricalkiller
http://t.co/7SMSmDUK
Reply to lyricalkiller
rawagman
Awesome that BP now has the Annotated Box Scores. I used to read these on The Score - best part of Mondays
Reply to rawagman
shmooville
Seriously, great work. Best new column at BP in years. Not since Joe left has there been a go to column to read on the thrown everyday. That also helps avoid getting fired from laughing in the more serious portions of work establishments.
Reply to shmooville
mattidell
There needs to be a post on its own about those defensive numbers for Bourjos. I am very curious.
Reply to mattidell