The player who hit a grand slam and knocked in the game winning run last night hits second tonight. The player who collected an unwanted golden sombrero last night in the ninth spot of the lineup is hitting cleanup tonight while  the guy with the second worst TAv in baseball last season it in the lineup while last night's fifth place hitter is on the bench. The fans shake their heads when checking out the daily lineup while Joe Maddon is on the field explaining to the pool of writers the process (sorry, Mike Ferrin) behind the lineup. The aggressive shifting of last evening and the lineup and even rotation machinations are the kinds of things you expect to see in a pennant stretch rather than opening weekend but that's become the modus operandi for Maddon.

The open door policy that most of you likely enjoy in your workplace is replicated here in Tropicana Field. Baseball Prospectus has its footprint on the Rays franchise with guys like James Click, Erik Neander, and Chaim Bloom behind the curtains at 1 Tropicana Place. Maddon has often said that the guys bring him as much information from their data catacombs as he does from the field up to them in order to prepare the game plan for the field. Tonight, Reid Brignac gets the start at shortstop as his swing tends to fare better against groundball pitchers and Hiroki Kuroda is more groundball proficient than tomorrow's starter, Phil Hughes. Carlos Pena hitting out of the second spot in the lineup is something Maddon hinted at in the spring because teams would be less willing to shift their infield defense against Pena if Desmond Jennings were on base in front of him.

Maddon also announced the team had decided to adjust their rotation by moving Jeff Niemann back a day in the Detroit series next week which allows James Shields to stay on a regular schedule coming off a rough first start of the season. The Rays normally try to do this with day games as Niemann tends to pitch better during night games but all three games in Detroit next week are in day games.

David Price takes the mound tonight with memories of his last outing against the Yankees fresh in his mind as only the improbable comeback in game 162 saved Price from wearing an ugly final loss to the 2011 season.

How aggressive have the shifts been for the Rays against the Yankees? This is what was employed against Andruw Jones with Curtis Granderson on first base. Jones preceeded to hit a hanging curve out to left field that drove Granderson in after he advanced two bases on a mental lapse by Carlos Pena who failed to cover first base on a pick off attempt by catcher Jose Lobaton. 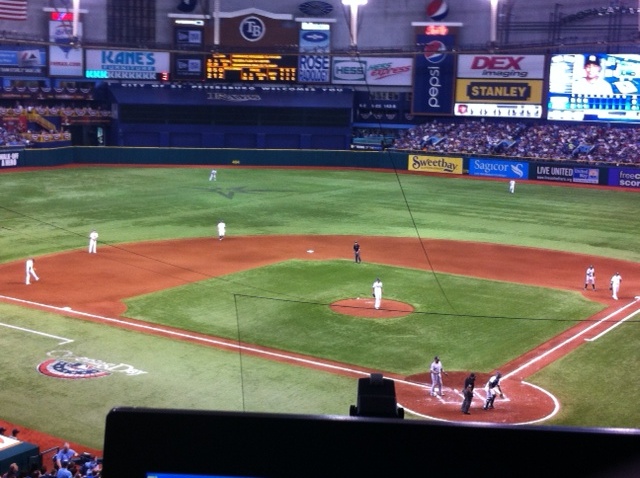 Maddon stated that a primary reason for hitting Pena in the second spot was to lessen the ability for teams to shift their defenses to play to Pena's pull tendencies. Pena has been up in both situations so far tonight and here is how that situation has played out visually with Desmond Jennings on base: 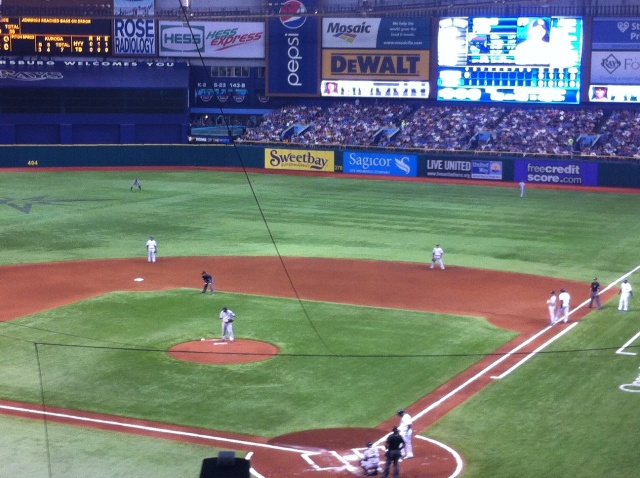 Compared to nobody on base in the fifth inning: 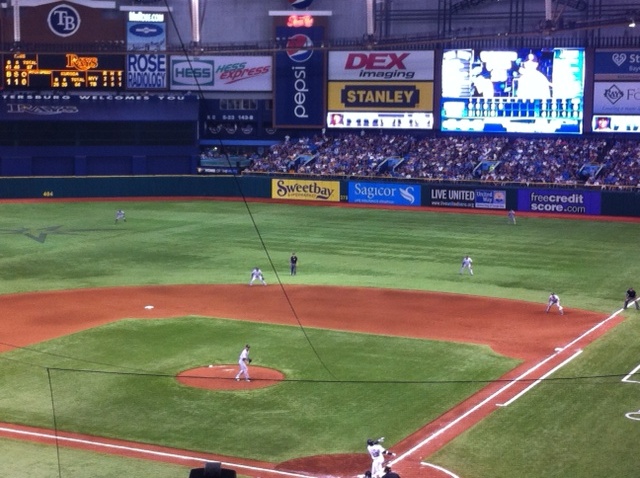 The first ever use of instant replay happened at Tropicana Field in 2008 when the umpiring crew gave an Alex Rodriguez home run a second look to confirm it. They once again had to go to replay tonight to review an apparent Evan Longoria home run off Clay Rapada. The ball went into the first row of the right field stands into the waiting glove of a "fan" that was wearing a Rays shirt underneath his Yankees jersey while wearing a Rays hat. It turns out his receiving skills are as wrong as his wardrobe as replay showed he indeed Jeffrey Maier'd the ball and prohibited Nick Swisher from making a play on the ball. The play was rendered meaningless as Mat Joyce blooped a two-run single off Clay Rapada in the next at bat driving in both Pena and Longoria.

Before the game, Maddon said he moved Joyce into the clean-up spot despite the four strikeouts last night to "pump him up" and Joyce has responded with a home run and three runs driven in on the evening. Mission accomplished.

Last season, it took the Rays offense 63 innings to score their 15th run of the season and it came on the first of Dan Johnson's two home runs last season. This season, it took the team just 15 innings to so this season.   If you wanted more proof of how spring stats are mostly meaningless, the Rays had the worst team batting average in spring training  as they hit .231and through the first two games, have gone 22 for 66. Last season, the Rays were shut down in their opening homestand by Jeremy Guthrie, Jake Arrieta, and Zach Britton but have so far handled the Yankees top two pitchers surprisingly well. I asked Maddon about the differences between last season and this season and this is what he had to say (click to hear Maddon on the offense).

The good news is that the Rays have opened the season with the morementum team slogan and have carried that to two wins to start the season. The bad news is the team has had to use its bullpen heavily in the last two night as Shields was unable to work deep into the first game while Josh Lueke failed to wrap up a six run game in the ninth. Lueke's failure forced Maddon to use Joel Peralta on a consecutive night, something he did not want to do, and Peralta was punished by Nick Swisher with a three-run home run to bring the game within two runs. Swisher had a fantastic game tonight drawing multiple four-pitch walks, hitting the three-run home run, and played excellent defense in right field. He is one of my favorite players to watch because of the completeness of his game and I find him to be underrated by the casual fan. The Rays do have the luxury of an off-day on Monday as they travel to Detroit but Maddon had hoped to give the pen a rest tonight after their efforts last night to hold the Yankees hitless over the final four innings to allow the offense to do their part in the ninth inning.

Peralta was replaced by Jake McGee who had the unenviable task of facing Robinson Cano. Even in a lefty-lefty matchup, McGee's a primarily fastball pitcher while Cano is primarly a fastball crusher. The tough at bat worked out in Cano's favor to a walk to which Maddon once again went to the pen to bring in Fernando Rodney who was able to get Alex Rodriguez to ground out on a first pitch fastball to end the game netting Rodney a win and a save in his first two games.

You need to be logged in to comment. Login or Subscribe
bb10kbb10k
Love this in-game bizness.
Reply to bb10kbb10k
moonlightj
Thanks. I wish I could be here for every game but I am only able to do 25-30 games a season against my overall schedule.
Reply to moonlightj
orlandoca7
Maddon may be my favorite manager around today. I give him credit for trying always to maximize his talent, which offensively doesn't match up to the Yankees and which doesn't warrant the easy-same-order every day approach most managers take to avoid criticism. I do wonder if he'd be able to do all this in NY, where every little thing goes under the microscope. In Tampa he has a lot of players who are okay but, essentially not everyday guys, so I think he is doing the right thing no doubt.
Reply to orlandoca7
moonlightj
The thing with Maddon is that he is always willing to explain what he is doing to those that are willing to listen and ask the right questions. He doesn't volunteer strategy information or reveal everything behind the plays they call, but if you ask him about things, he'll address them the best he can without revealing too much.

He said last night he spends the most time planning out the bullpen and the batting orders and does most of his thinking while on his daily long bike rides around his part of town along the bay front.
Reply to moonlightj
flalaw
I guess six-run leads join helpless women as things not safe in the hands of Josh Lueke.

His continued presence on the roster is a black mark for the Rays.
Reply to flalaw