Look for an "Opening Day(s)" Tater Trot Tracker post this weekend. Before I get a chance at that, though, I couldn't pass up the brilliance that occurred this afternoon at Wrigley Field.

As is fairly typical for the first game of the season, the Cubs were having a celebrity throw out the first pitch today. That celebrity? The one and only Bill Murray, big-time Cubs fan and (occasional) minor-league owner. But Murray doesn't do anything normal anymore. As they announced his name in anticipation of Murray walking out to the mound for the simple toss, the former Ghostbuster threw everybody for a loop as he took off at full-speed around the basepaths. 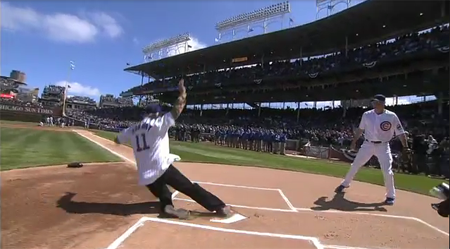 The video is not yet embeddable, but you can watch it in all its glory here. As you can see, Phil the Weatherman gave it all his might out of the box, as he rounded first in under six seconds (5.93 seconds to be exact). He kept hustling into second base, images of Steve Zissou's aquarium and Frank Cross's Ghost of Christmas Past no doubt running through his mind. At 11.29 seconds, assistant groundskeeper Carl Spackler touched second base, having awkwardly adjusted his path as he approached the keystone. No word on if it was advice from the Dalai Lama that told him to do so, or just an odd gopher on the field.

It was at this time that Murray started to get winded, with the comedy-god clutching his chest as if he had just been shot with a shotgun by the CEO of Facebook. His pace didn't slow all that much, though, making the turn for home at 16.66 seconds. The final 90 feet were the most fun, with Herman Blume first trying to run over Max Fischer's bike before he tossed the first-pitch ball to his catcher Kerry Wood 30 feet from the plate. Eventually, Murray, wearing his Cubs #11 jersey, slid awkwardly – and triumphantly – into home, a mere 24.43 seconds after beginning the trot. It was a very Soriano-esque trot time (if not trot effort). Clearly, the man who was Garfield wanted to be authentic as possible.

Murray did end up throwing the ball from the mound, but not until after he writhed on the ground for a moment or two as if he had just been slimed. The pitch was good, though a little short – but I don't think anyone is going to remember that.

There was a lot of fun stuff happening on Opening Day today, but nothing will ever top Bill Murray putting himself atop the Tater Trot Tracker leaderboard today. What a great day!

I don't like the Cubs, but Opening Day was glorious.
Reply to gweedoh565
Agent007
Who won last year's Tater Trot derby? I think I missed that.
Reply to Agent007