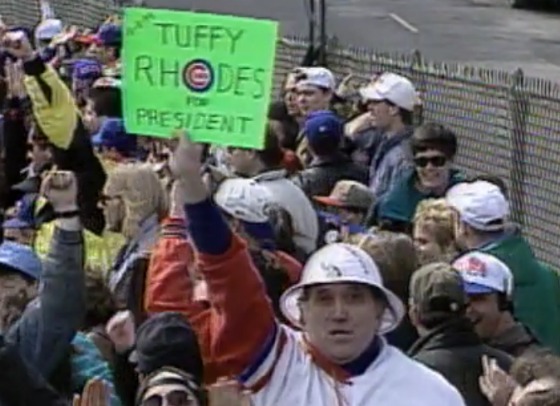 Eighty-eight players hit three home runs in a game during the 1990s. Jeff Treadway, Darnell Coles, Randy Milligan, Jeff Blauser, Ernie Young, Dan Wilson, Bobby Estalella, Lee Stevens, Mike Lansing, and Brant Brown all did it, but we remember Rhodes. We remember Rhodes so well. “Celebrating the most expensive week in fantasy baseball history,” says his Baseball-Reference sponsorship. There’s a syndrome named after him in fantasy baseball. You can buy an audiocassette of the broadcast on eBay. We remember Rhodes because he hit three home runs on April 4, not on June 4, and we remember it because Opening Day used to mean something.  Would we remember it if the season had actually begun with a two-game series in Japan a week earlier, followed by an Opening Night game involving two other teams, and would we remember it if the Cubs hadn’t played on April 4 but rather April 5, a day after much of the league launched the schedule? I honestly don’t know.

I’ve never met you, but I’m pretty sure I know at least one fact about you: at some point in your life, you have said that Opening Day should be a national holiday. I’ve said, it, too. That’s an insane idea, but we’ve all said it, and it wasn’t always totally unrealistic. In 1952, Fred Lieb wrote in The Sporting News about Opening Days around the turn of the century:

It was an accepted half holiday, with many stores and business houses closing up shop. In New York, it was an annual custom to parade the old Giants up Broadway in tally-hos, with a liveried trumpeter sitting next to the stove-pipe hatted manager, Jim Mutrie, and giving long blasts from his horn.

It was an opening-day practice to parade the old National League Detroits and their first game rivals to the old Russell House on Woodward Avenue, and then at a sumptuous mid-day repast stuff the players with turkey, roast beef, ham, Canadian mutton and tankards of beer. A few hours later, these rugged old-timers were ready for the day's fray.

The closest thing to an actual act of Congress came in 1929, when Herbert Hoover’s first address to the legislature was scheduled for the same day as baseball’s opener. The Senate took care of the problem:

The conflict in dates has created considerable concern among the host of baseball fans in congress but Senator Watson, of Indiana, majority leader of the senate, is also a fan and an early adjournment of the senate is promised. Adjournment of both house and senate after the reading of the presidential message at noon is expected.

In 1936, it was common for “a good share” of the federal government to shut down for at least half of Opening Day, according to the Los Angeles Times:

President Roosevelt will throw out the first ball at Washington, where the Senators entertain the New York Yankees and a good share of the government partakes of a half-holiday, an annual custom.

World War II tempered excitement for Opening Day. In 1946, it marked a fresh start after the war’s end the previous season. “This was a day to forget about nylon lines, black marketeers, high rents, low beer supply, shortages of shorts, shirts, suits and the delay on the delivery of that 1946 automobile. It was a day even to forget about the Iranian question and the atom bomb.”

Via Baseball Almanac, Wilson ran this ad in 1954 acknowledging the special significance of the day: 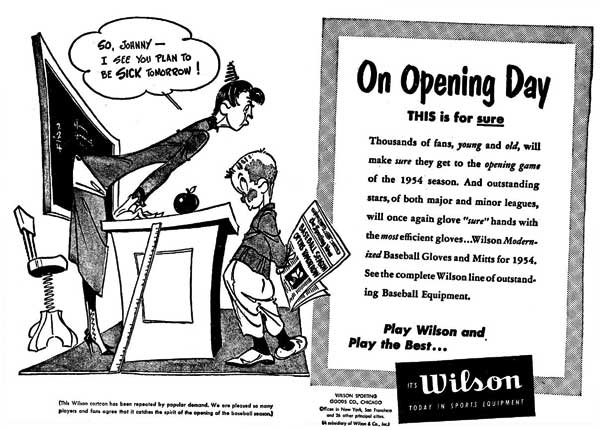 Even in minor-league cities, the first day of play was routinely declared at least a half holiday. In 1913, a brass band paraded the streets of a shut-down Atlanta for the home team’s first game against Birmingham. “If You Want to Find Anybody in the City This Afternoon You Will Have to Pay Visit to Ponce de Leon Park,” the local newspaper wrote, referring to the stadium where the Atlanta Crackers (!!!) played. Salt Lake City went dark to celebrate the start of the 1916 Pacific Coast League schedule. “Every business that can possibly do so” was implored to close for the start of the season in St. Petersburg in 1921. Jersey City Mayor Frank Hague declared April 16, 1941 “a half-holiday for schools, Government offices and all other things in the Jersey City domain.” About 60,000 fans attended the Jersey City Giants’ opener that year; park capacity was 25,000.

And now there are the modern efforts to codify Opening Day. In Cincinnati, a downtown architect and many of his staff members will be collecting signatures to put an actual initiative on an actual ballot to declare Opening Day a city holiday. (It won’t include time off. “We don’t want to have problems with the unions, the schools or the parents.”) And the mayor of St. Louis threw his support behind a marketing agency’s “Make It a Holiday” push.

But, unless this is just my nostalgia talking, Opening Day is getting further and further from feeling like an actual holiday. In 1954, the year Wilson ran that advertisement, all 16 big-league teams opened on the same day. Ditto for 1946, the year of the beer-supply shortages. By my first Opening Day, 18 of 26 teams opened on the first day, the rest the day after. When Tuffy Rhodes hit his three home runs, a Sunday night game had been added prior to Opening Day, but 20 of the 28 teams did debut on Monday.

Last year, there was no night-before game, but the shift to a Thursday launch meant only 12 of 30 teams played on Opening Day. And this year’s Opening Day is four days: Two games in Japan that nobody saw; tonight’s “Opening Night” in Florida; Thursday’s “Opening Day,” with just 14 teams playing; and a short schedule of nine games on Friday, including 13 teams’ 2012 debuts. Baseball’s Opening Day now more closely resembles the start of the 1876 season, the National League’s first. That year, Opening Day was spread out over six days.

All this way just to get to my opinion, which is: Eh, ok, whatever. After two decades of Bud Selig, the consensus on my Twitter timeline is that the commissioner makes decisions that irk hardcore baseball fans because he knows they’re not going anywhere, in the pursuit of casual baseball fans, who might. That seems about right. The soft opening in Tokyo may have been barely noticed over here but had real significance in the Japanese market. The Wednesday night game between the Marlins and Cardinals might feel like little more than a tease to baseball fans who don’t have Kyle Lohse on their fantasy rosters, but it turns a prime time game into a national event. The sparse Thursday and Friday schedules may make those days’ offerings feel incomplete, but they (theoretically) create the scheduling flexibility that allows for a longer postseason.

The truth is, I enjoyed waking up at 3 a.m. for the Mariners and A’s. I’ll enjoy the anticipation all day today as we wait for the night game to start. Light schedules on Thursday and Friday are silly and annoying, but guess what: I’m going to really enjoy both of those days. Not because Opening Day is a holiday anymore—it’s really not—but because you just can’t screw up baseball.

You need to be logged in to comment. Login or Subscribe
lgranillo
Brant Brown hit 3 home runs in a game?! How did I not know that? Apparently that's what happens when you face Mark Portugal in Wrigley in June.

I had such high hopes for those early-90s, Bob Bennett-led Fresno State players...
Reply to lgranillo
rbrianc
Opening Day is alive and well - its when your team's Opening Day is.
Reply to rbrianc
mhmosher
It might behoove King Bud to pay more attention to the younger generations rather than concerning himself solely with the wishes of the major networks. MLB has the oldest average age of their typical fan. It's no wonder kids aren't as interested when playoff games start at 8:40 pm EST. And opening day starts in Japan at 6 am.

Reply to mhmosher
eas9898
Let's stop calling it opening day, because, as mentioned above, it's simply not. The season began last week, and it continues this week. It is sad indeed, and unfortunately, nothing to get excited about anymore.
Reply to eas9898
skipper
It looks like that ad for Wilson is from 1954 not 1934 as if that means anything
Reply to skipper
lyricalkiller
So it is. Thank you.
Reply to lyricalkiller
gweedoh565
Perhaps it was because of this transformation from Opening Day to Opening Week that, while you remember so well Tuffy Rhodes' achievement, you totally forgot about the illustrious Dmitri Young's 3-homerun Opening Day for the Tigers in 2005:

B. The typography in that Wilson ad is glorious.

iii. Bobby Fucking Estalella???
Reply to delorean
BrewersTT
Estalella had good power.
Reply to BrewersTT
aaronbailey52
The only irk I have with the opening day shenanigans is that now my fantasy baseball lineup is due four days before rosters are set. Ouch.
Reply to aaronbailey52
Sacramento
The article specifically referenced only the 1990s, not the 80's or 2000's.
Reply to Sacramento
jivas21
I'm lucky enough to be in a profession where I have wide latitude to set my own schedule. Tomorrow is a scheduled day off and will be filled with baseball. The early-games shenanigans really doesn't do much to weaken my enthusiasm for "Opening Day", although I may be in the minority there.

(However, I do have to admit - tonight's game being a one-game series is particularly odd).

Sam - you may want to update your BP username. I don't think "SamMillerOCR" fits anymore, and thank goodness for that.
Reply to jivas21
BarryR
Well, I actually remember the 1950s, and what I remember is that Opening Day took place in Washington,with the President throwing out the first ball. Starting in 1962, the NL got in on the act, with the Reds hosting the "traditional" opener, in honor of their being the first team. So having two ODs isn't all that new.
I would not object to an Opening Night game preceding Opening Day. However, it should always feature the defending World Champion raising the banner and giving out the rings in front of their home crowd. That is an event for the local fans and would link the seasons for everyone. What is disgusting about the Selig era is that he considers it more important to show off a new ballpark than truly honor the Cardinals.
As for the light schedule on Friday - I go back to the point where there would have been no games Friday, since baseball didn't play on Good Friday (on the rare years when it showed up late enough to be during the season).
Reply to BarryR
BrewersTT
I really love your Opening Night idea. What could be a better rollout than the game celebrating itself and its heroes, and replaying all the highlights of last year's World Series?
Reply to BrewersTT