In the ninth inning of Tuesday's game between the Oakland Athletics and New York Yankees, the A's closer Andrew Bailey came on to close out a 6-3 lead and promptly got into trouble. Jorge Posada homered to make the game 6-4. Russell Martin doubled, and Brett Gardner reached on an error. Derek Jeter bunted to move the runners over, and Curtis Granderson walked to fill the bases. After Mark Teixeira fouled out, Robinson Cano came to the plate and worked the count to 3-2.

Bailey threw a fastball on the outside corner at the knees, and home plate umpire Gary Cederstrom called it ball four, sending Cano to first and scoring Martin to cut the Oakland lead to 6-5. Three pitches later, Nick Swisher flied out to the warning track to end the game and make any impact of Cederstrom's call moot, but Cano's ball four was nonetheless subject of no little discussion on Twitter.

The PITCHf/x tracking system indicated that Bailey's 3-2 fastball crossed the front of home plate at a height of 1.80 feet and 8.65 inches from the center of the plate horizontally. Umpires typically call strikes on left-handed batters down to about 1.75 feet high. Of the 1,283 pitches taken by left-handed batters over the last two seasons that were within one inch of the location of this pitch, 74 percent of them were called strikes. Cederstrom called 11 of 17 of those pitches strikes over the last two seasons.

Umpires typically call a slightly smaller strike zone with two strikes, the reasons for which are still a matter of debate and research, but on a 3-2 count, umpires called 28 of 48 pitches within one inch as strikes. So we see that this was a borderline pitch, but one that is more often called a strike than a ball.

The pitch location relative to the catcher's target can be a factor in whether the umpire calls the pitch a strike. Bailey did a very good job of hitting the target set by Kurt Suzuki for this pitch. The pitch was just a hair down and in from where Suzuki set up on the outside corner. You can see here where Suzuki's glove was set as Bailey released the pitch and where he moved the glove to receive the pitch. 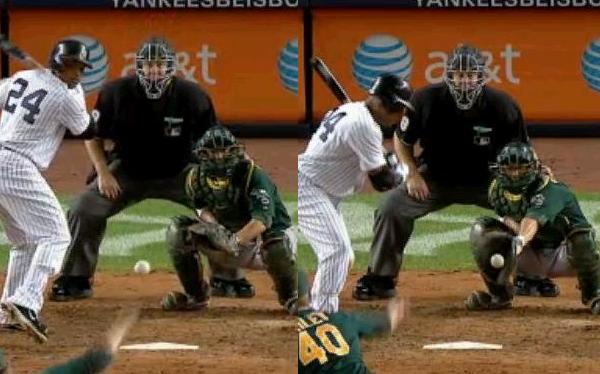 Normally, we would expect a pitcher hitting the target on the corner to get a favorable strike call. I am not sure why he did not get it. One negative thing I noticed was that Suzuki framed the ball by pulling it back up toward the strike zone. Umpires typically do not like that behavior.

As Tom House explained in The Diamond Appraised, catchers can affect the size of the strike zone:

That's the other area where a catcher is critical: He's your line of communication with the umpire. No umpire will ever admit this, but of course the catcher influences the ball-strike calls. And there are some pretty reliable rules for how to do it:
1. Receive the ball – don't reach or grab for it. This will make it look as though the pitch is right where you wanted it. No pitch you have to reach for will ever look like a strike, even if it is.
2. Move predictably and deliberately; don't jump around.
3. Maintain a tempo. Don't let the game drag with constant trips to the mound or by being slow to set up (Of course, there are some exceptions. Pudge Fisk, you are one of my best friends, but you are the slowest lug in the game!)
4. If you question a call, do it with your head still and facing the pitcher. Don't drop your head in frustration, turn around to yell, or hold the ball where you caught it extra long to prove it was a strike. Umps hate to be shown up, and they'll get even if you do it.
5. Frame the strike zone, but don't try to frame obvious balls.
6. Catch the low strike with the glove up, and you'll probably get the call; roll the glove over, and you'll lose it.

This pitch probably should have been called strike three on Cano to end the game, but it was a genuinely close call. Bailey made an almost perfect pitch. Suzuki may not have done Cederstrom or Bailey any favors with his framing of the pitch, but I cannot say how Cederstrom would have called it had Suzuki held his glove in place.

You need to be logged in to comment. Login or Subscribe
cfinberg
Great article, and not just because I also kicked and screamed about that call. It's exactly these kinds of minutiae which keep me coming back to BP, and to baseball in general.

Just wondering, though, if you can show me Bud's express, written consent to your posting of that animated .gif
Reply to cfinberg
holgado
Great stuff, Mike.
Reply to holgado
lloydecole
Framing the ball unquestionably is a skill--and an art. Yet in most the I've heard about the game's best catchers, past and present, I don't believe that I've ever seen a "best at framing the ball" line item. Who do you believe has been the most reliable at framing the ball?
Reply to lloydecole
mikefast
Lloyd, catcher framing is something that we in the sabermetric field are just starting to be able to measure well, so I'd tread a little tentatively with our conclusions at this point.

Max Marchi did a three-part series at the Hardball Times, and he found Jose Molina, Brian McCann, and Russell Martin as the consistent leaders in runs saved by catcher framing over the last few seasons.
Evaluating Catchers Framing Pitches Part 3

I wrote some about catcher framing over the offseason.
The Real Strike Zone
I adapted a method pioneered by Dan Turkenkopf and Bill Letson, and I found Jose Molina at the top, followed by Yorvit Torrealba and Gregg Zaun.

On a scouting level, I'm not sure which catcher has the best technique, and I don't know which techniques translate into saving runs other than from commentary from coaches such as House or other observers.

Reply to mikefast
briankopec
20 runs! That doesn't seem possible. I don't mean to cast doubt on the studies... I just, I mean, wow.
Reply to briankopec
mikefast
Sean Smith did an excellent study of catcher ERA that was published in the Hardball Times Annual this past winter. He used catcher-pitcher pairs, and he found catcher ERA effects on a similar level. Catcher ERA would include framing, pitch calling, and any psychological/coaching effects. It would not surprise me if framing was a large portion of that.

So I think we're in the right ballpark with framing. As I said before, we're not to the point of having perfected this yet. We might be off by a factor of 2, but I doubt we're off by a factor of 5.
Reply to mikefast
mikefast
Btw, saving 20 runs in a season means getting about one extra strike call per game, out of about 75 called pitches per game. That does not seem outlandish or impossible to me.

The vast majority of the catchers are within the +/-10 runs/season range, but the very best and worst are around +/-20 runs.
Reply to mikefast
briankopec
I guess I'm surprised that 1 extra strike per game is 20 runs per season.

Reply to briankopec
markpadden
Curious what the source is that you use for "runs per called ball-->strike." I've seen a few numbers thrown out there in studies, from ~0.08 to 0.25 runs/changed call. Do you have a view on what is accurate?
Reply to markpadden
markpadden
Never mind. It's discussed below..
Reply to markpadden
mikefast
I wonder if this call from last year entered Cederstrom's mind:
Umpire Gary Cederstrom Admits Blow Strike Call in Tigers Loss

Cederstrom called strike three on a pitch on the outside corner against Johnny Damon to end the game. That pitch was about 7 inches farther outside than this one, but I wonder if that experience played any role last night.
Reply to mikefast
TangoTiger1
A crude way to think about the run value of a strike or ball is this way:

That means that switching a called ball to a called strike is going from being at a +.075 run state to a -.09 run state, or around a .16 run swing.

This is just a quick crude way to try to frame the expectation.
Reply to TangoTiger1
BrewersTT
@TangoTiger: This is very interesting, and I appreciate that you give us the caveat that it's a back-of-the-envelope sort of analysis, but it just makes me hungry to see more. Is there a study on this subject? I have a feeling that the contribution of a ball or strike to a hit or out in the field may be more of a driver, if for no other reason than that more PAs result in those. Also, if a walk follows a 3-2 count instead of 3-0, there are two strikes that contribute zero, and therefore should reduce the estimated value of a strike, unless we come to grips with the effects in each count situation. I realize you will have thought of all this already. Many thanks.
Reply to BrewersTT
mikefast
Dan Turkenkopf looked at this back in 2008, here:
Revisiting the Run Value of Switching a Ball to a Strike

Lots of folks, including myself, have calculated the run values of various counts, including the results, not only of walks and strikeouts but also of batted balls that occur after that count. I link to Dan's work here because he specifically calculated the effect for called pitches and called pitches near the edge of the zone.
Reply to mikefast
TangoTiger1
There's several articles linked here:

I'm sure at least one will appeal to you.

Reply to TangoTiger1
bravejason
Looks like number 6 on the list may have been a factor as well.
Reply to bravejason
mikefast
Yes, I agree. To the extent that House is right, Suzuki appears to have offended #1 and #6.

I have Brent Mayne's book on catching. I should go look and see what he has to say about this.
Reply to mikefast
BrewersTT
Thanks guys for your pointers to more material on the subject! I will dive in.
Reply to BrewersTT