Prior to last week, Jerome Williams last played in the major leagues in 2007. He suffered a rotator cuff injury that April and finished with a 7.20 ERA in six starts before being demoted by the Washington Nationals. Since then, he has pitched for minor league affiliates of the Nationals, Twins, Dodgers, and Athletics. He spent the 2010 season with the Uni-President 7-Eleven Lions of the Chinese Professional Baseball League in Taiwan, and he started the 2011 season with the Lancaster Barnstormers of the independent Atlantic League. On June 16, the Angels signed him to a minor league contract and assigned him to the Salt Lake Bees. Last week, the Angels recalled him to the major leagues.

Williams made a brief relief appearance in the ninth inning of a game last Wednesday against the Rangers. He faced three batters, allowed two hits, and garnered one double play ball, using a total of five pitches. As such, it was a fairly nondescript outing, but it contained a promising note that got my attention. Williams threw three fastballs, averaging 93 mph, along with two cutters at 89 mph.

When Williams last played in the majors, the PITCHf/x tracking system had just been installed in Turner Field, and his April 11, 2007 start against Atlanta was partially tracked by PITCHf/x. In that game, his four-seam fastball averaged 88 mph, his sinker was 89 mph, and he threw a slider (verging on a cutter) that was 84 mph. To see him throwing four to five miles per hour faster after four years out of the majors was a pleasant surprise.

Last night, Williams started against the Baltimore Orioles, and he did not disappoint. He threw seven strong innings, allowing only one run on a home run by Matt Wieters. He struck out six, walked none, and gave up six hits. Moreover, his stuff looked just as good as it did in his brief relief appearance, and he showed his full repertoire of five pitches.

Against the Orioles, he threw 35 sinkers, averaging 91.5 mph, and six four-seam fastballs, also averaging 91.5 mph. He relied heavily on his 88-mph cut fastball, throwing 42 of them. He added 19 changeups, averaging 83.5 mph, and five curveballs, at 79 mph. Let's look at how his pitches moved over the last 40 feet from home plate. 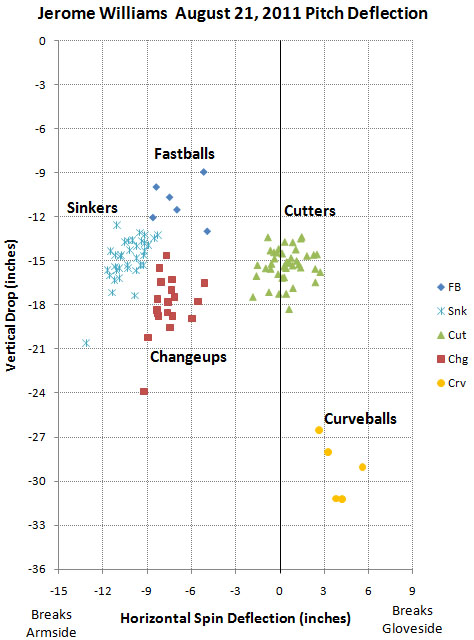 He got an impressive amount of movement on his sinking fastballs, and his curveball had pretty good drop. Let's compare to how his stuff looked in 2007. 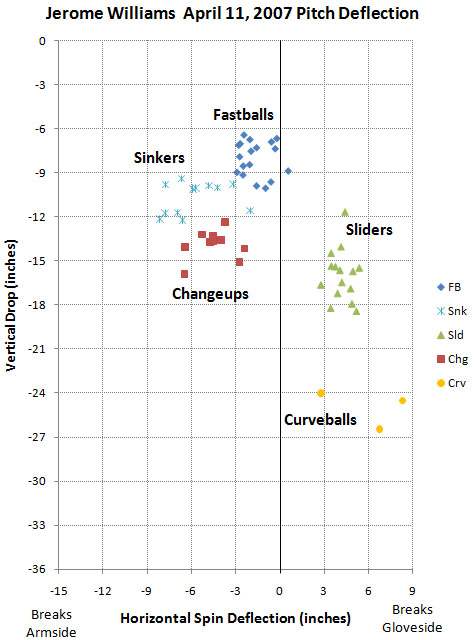 In addition to finding three mph in speed since 2007, Williams' pitches have more movement in 2011, too. What happened? One thing that changed is that his arm slot is lower in 2011, which helps the sinking and tailing action on his sinker. In this post-game interview by Sam Miller, Williams responded to a question about dropping his arm angle: 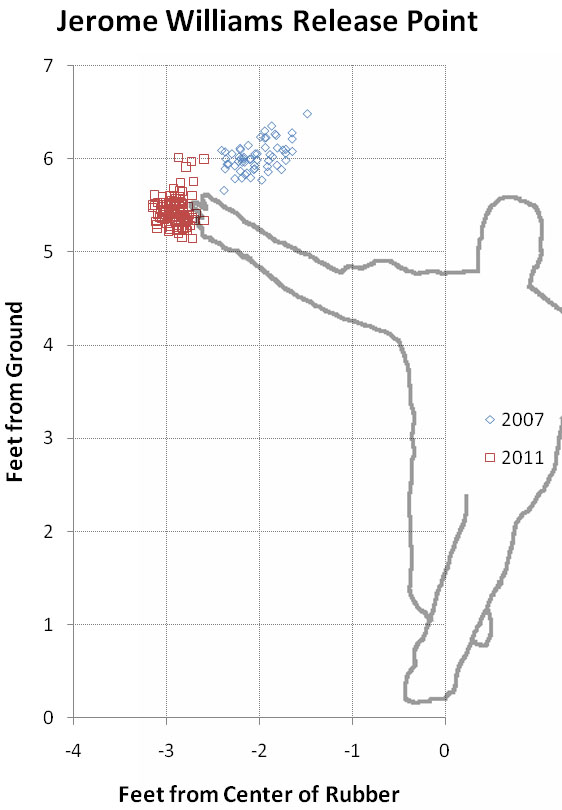 He maintained his speed fairly well throughout game last night. His fastball started at 92 mph, and it was down to the 90-91 mph range by his last three innings. His previous start was a complete game five-hitter seven days earlier against Omaha on August 14. 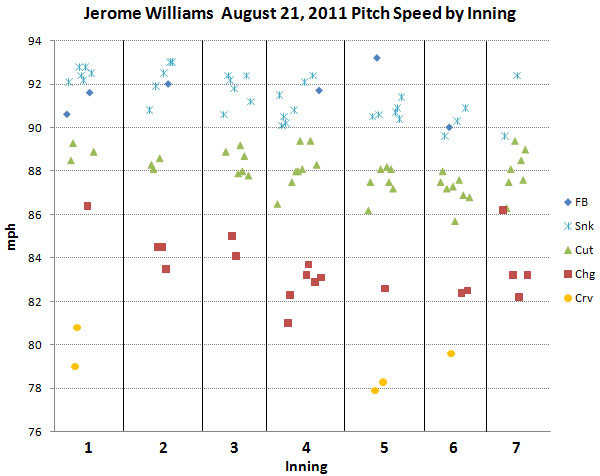 One game is not a large body of work, but it is enough to get some idea of how he used his pitches. We will examine his sinker, cutter, and changeup in more detail here.

The following charts show where each of his pitches crossed the front of home plate, from the catcher’s viewpoint, along with the result of each pitch. 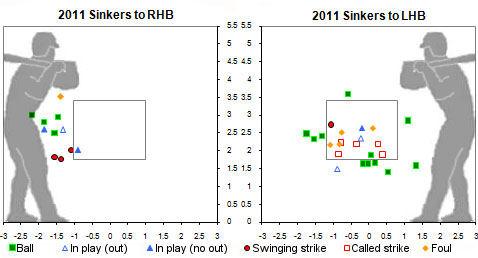 The sinker was Williams' favorite pitch to lefties, to whom he threw it half the time. He mostly kept it down in the zone, though one sinker over the heart of the plate was hammered over the right-field wall by Wieters to start the seventh inning.

He threw the sinker only 19 percent of the time to righties. He did a good job of keeping it in on their hands, reminiscent of Ryan Vogelsong's usage of the pitch, though J.J. Hardy dinked a single into short left field and Adam Jones rolled a groundball single deep in the shortstop hole, both off of sinkers inside in the fourth inning, sandwiched around a Nick Markakis line-drive single off of a changeup. Williams worked out of that bases-loaded, no-out jam by striking out Vladimir Guerrero on a sinker inside at the knees and getting Wieters to ground into a double play on a changeup low and away. 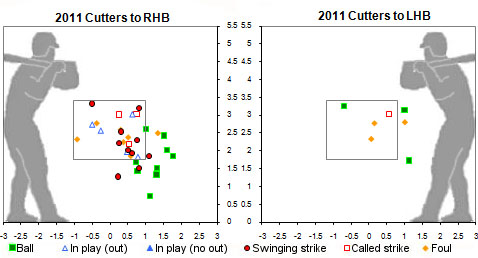 The cut fastball was Williams' go-to pitch against right-handed batters, as he threw it to them 61 percent of the time. He kept it on the outer half of the plate and got 10 swings and misses, including six by Craig Tatum, who struck out twice on the cutter. 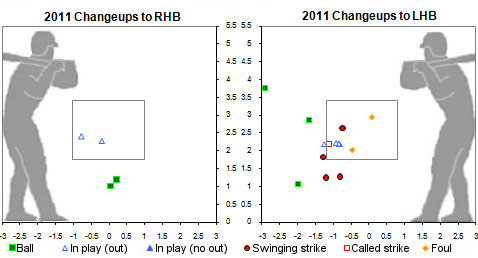 Williams used the changeup as his secondary pitch against left-handed batters, throwing it to them 30 percent of the time. He kept it low and away and got four swings and misses, including strikeouts of Markakis in the first, Wieters in the second, and Felix Pie in the third.

Williams' stuff shows good promise, with low-90s speed and good movement on his sinker. He did a good job of placing both the sinker and cutter in difficult-to-hit spots in the zone. His cutter and changeup both looked like worthy out pitches, though it is tough to tell whether batters other than Tatum will struggle as much against the cutter. His curveball also had good movement, though he did not throw it enough for me to get a solid read on his ability to locate the pitch or the batters' reaction to it.

The Orioles were not the most challenging opponent, but they do stand ninth in the league in runs scored, which makes them a tougher opponent for a pitcher than their league-worst record would imply. Williams put in a strong first start, and I look forward to seeing what he can do the rest of the season.

You need to be logged in to comment. Login or Subscribe
adecker31
Love this stuff. I was always rooting for Jerome Williams. His story is a compelling one, he seemed like nothing but a nice guy and I was disappointed when his career seemingly reached an endpoint. I hope the second act of his story is a huge success.
Reply to adecker31
rcmiller3
Thank you for giving me someone to choose with my AL Supplemental pick. Now, if you can follow up with a Jesse Foppert update, we'll be all good.
Reply to rcmiller3
TaylorSanders
One thing I found interesting is that his cutter doesn't break horizontally at all. My gut reaction is that it isn't a very good cutter then. An RHP's cutter should break away from an RHB and in on a LHB. His stays straight.
Reply to TaylorSanders
mikefast
That movement on a cutter is quite typical, actually. The more the cutter is fastball-like, the more it will break to the throwing-arm side, and the more it is slider-like,the more it will break to the glove-arm side.

There's no simple formula for what movement on a cutter is "good" and what movement is "bad". Presumably it's movement relative to the fastball that matters, and not so much the movement independent of the pitcher's other pitches.
Reply to mikefast