“Something in my swing was not right in Minnesota. I could never hit for power. Whenever I took a big swing, they’d say to me, ‘Hey, hey, what are you doing?’ So I said, ‘You want me to hit like a little bitch, then I will.”—David Ortiz in The Boston Globe (via Mind Game)

Baseball’s well-earned reputation as a game of adjustments manifests itself on multiple levels. Matchups between pitchers and batters often hinge on short-term tweaks, but enduring improvements by players can often be traced to more substantive shifts in approach sustained over full seasons. One such adjustment plays a central role in David Ortiz’s origin story. Ortiz wasn’t bitten by a radioactive hitting coach, but his fortunes changed dramatically after the pivotal moment when the Red Sox acquired him and, recognizing what they had, told him to load up when he swung; his original teams, the Twins, had forbidden him to swing hard throughout the early stages of his major-league career.

Armed with an approach better-suited to his skills,  Ortiz has provided the Red Sox with countless big moments and displays of uncontained bravado—like his styling bat flip after homering on Wednesday evening—along with many contributions that can be counted, like 305 home runs and 1,275 hits. If Ortiz played for a team with a smaller fan base, he might qualify as a cult hero; as it is, calling him a folk hero might be more accurate. Despite his popularity, Ortiz was dealing with daily questions about his contract status at this time last year. Now, he’s more like to field questions about whether he will start in the All-Star game.

Ortiz is hitting .324/.390/.602 in a down year for offense, posting his best OPS+ since 2007. Drastic improvements like this by 35-year-olds aren’t normal, but then again, 27-year-olds rarely make the transition from bench player to superstar, and Ortiz pulled that trick out of his hat when he reached Boston. Still, his late-career renaissance at the plate has been nearly as surprising as his initial offensive outburst, given that questions about his bat persisted through the early stages of the 2009 and 2010 campaigns.

April has been Ortiz’s worst month throughout his career; before this year, the DH had posted sub-700 OPS months at the start of each season since 2008. Ortiz managed an OPS over 700 this April, but the month still paled in comparison to his blistering May. Seemingly, whenever summer hit over the last few seasons, Ortiz would emerge from his hibernation and shake off the rust for a strong finish.

Ortiz had a slash line of .197/.288/.308 on June 8, 2009, with two home runs in 229 plate appearances and more than two strikeouts per walk. Then he homered in his next game, hit another a few days later—then another, and another—then homered in back-to-back games, made that three of four games, and so on. From June 9 until the end of the season, Ortiz made 398 plate appearances, hit 26 home runs, and boasted a 908 OPS—he wasn’t cooked after all, just thawing. The DH took a similar route in 2010, as his OPS was below 700 in mid-May, but he stormed through the remainder of the season and finished at 899.

Avoiding a brutal April in 2011 was a good start to a good season for Ortiz, but the deviation from his recent pattern raises the question of whether his process has changed as significantly as his results. The chart below provides an idea of what Ortiz has done through June 7 this season compared to 2009 and 2010. It should be intuitive, with one caveat: the hit portion features a plate appearance denominator that includes only contacted plate appearances so as to avoid skewing due to changes in strikeout, walk, or hit-by-pitch rates:

Ortiz has improved his single and strikeout rates while holding his ground according to every other measure. Whenever a player is striking out less, the natural inclination is to see whether his walk rate has also dropped—which might indicate that he’s swinging earlier in the count—but that is not the case with Ortiz. However, he does appear to have grown more aggressive at the plate.

Since joining the Red Sox, Ortiz has seen four pitches per plate appearances in every season but one (2004, when he saw 3.99 pitches per plate appearance), yet he sits at 3.88 now, which would represent a career low. More noteworthy is Ortiz’s uptick in first-pitch swinging. In 2009 and 2010, Ortiz swung at 27 percent of first-pitch offerings, but in 2011, he is up to 34 percent—again, that rate would mark a career extreme should it be sustained.

An increase in aggressiveness can provoke suspicion that a batter is becoming reckless at the dish by expanding his zone. That simply isn’t true, as a batter can maintain his dignity and keep his Registered Disciplined Hitter pin while swinging at a high rate of first pitches. If Ortiz is swinging at more strikes within the zone—hittable strikes—then he could be avoiding falling behind (and possibly striking out) while racking up additional hits. The integration of PITCHf/x data allows us to see whether this theory holds water. Like so: 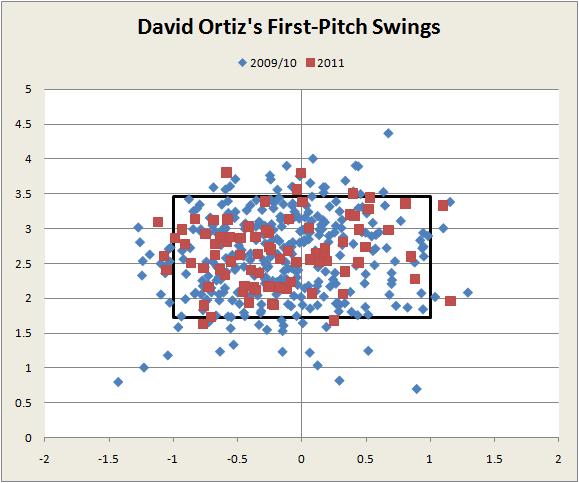 The box is generated from the average strike zone tops and bottoms recorded for Ortiz throughout the 2009 and 2010 seasons. Having two years of data represented by one data series messes with the perception of scale, but it’s a necessity, as three separate series would have resembled a Jackson Pollock painting. Ortiz appears to be swinging at more pitches on the outside corner of the plate and fewer outside of the zone. Power hitters tend to look for pitches to drive, so the former is a bit unusual, and the latter is not.

Because Ortiz appears open to swinging early at pitches outside and has a reputation as a notorious pull hitter, one has to wonder if he has started to take advantage of defensive shifts by going the other way more often. The splits data from Baseball-Reference doesn’t seem to support that theory:

If Ortiz has not started sending more balls to left field, then there is a chance that he may have improved the quality of his opposite-field offerings. Without HITf/x there are only so many ways to evaluate the quality of a batted ball without resorting to arbitrary batted-ball labels. One method is to look at batting average on balls in play. Ortiz’s BABIP on balls hit to left is at .355—better than recent seasons, but not dramatically so—so simply looking at the rate of hits out of chances might not reveal a major change.

Looking at the power production from those balls in play is more interesting, if not predictive of future success. Ortiz’s career ISO on balls to left field is .255, and his recent high is .343 (in 2009), but in 2011, his ISO to left field as climbed to .471. Ortiz has four opposite field home runs this season in 35 balls in play—his career high is five, and that came on 79 balls in play back in 2003.

Such an improvement can be the result of either random fluctuation or physical change. There is a chance that Ortiz has changed his mechanics or technique for handling outside pitches, but one pet theory is that he is standing closer to the plate. The same has been said about Jose Bautista, who can pull pitches on the outside corner and boasts the bat and hand speed to get around on inside pitches, too. Glancing at Ortiz’s stance in 2010 and 2011 doesn’t seem to show much difference in placement within the box, though.

Whether the improvement in opposite-field hitting can be chalked up to a small-sample fluke, the wisdom of Adrian Gonzalez, or a mechanical change, the Red Sox once again have the league’s best DH on their roster, and this time, they didn’t even have to wait for the second half of the season for him to start raking. Regardless of the reason, the Sox will be faced with a difficult decision when Ortiz’s contract expires at the end of the season—but that matter merits its own article.

You need to be logged in to comment. Login or Subscribe
ScottBehson
His transition to Boston and from scrub to star was the same year he was implicated in MLB's "let's keep it anonymous" PED testing. Just sayin'...
Reply to ScottBehson
mattymatty2000
They test for PEDs now. MLB has the strongest testing program of any of the major sports. Just sayin...
Reply to mattymatty2000
rawagman
When people say that Jose Bautista's rise has been unprecedented, I point to David Ortiz. Him and Sammy Sosa. http://section203.wordpress.com/2011/02/21/the-64000-question-plus-inflation-lots-of-inflation/
Reply to rawagman
ScottBehson
Forgive me if I have this wrong, but both Ortiz and Sosa were once projected as major power hitters in their prospect days. Isn't it true that virtually no one saw Bautista as anything more than a potentially adequate player?
Reply to ScottBehson
rawagman
If you read the hindsight views of guys who scouted him as an amateur, you'll hear of some who projected 20-25HR power from him - that's 50-55 on the 20-80 scale. So, yeah, he's definitely exceeded that, but it's not like he was universally thought of as a slasher. He just actuated his power - and then some.
Reply to rawagman
foulpole75
Great, timely article. I did keep waiting for a PED reference. Also, the bat bat flip was Tuesday night, not Wednesday. Again, thanks for the insightful story with strong data on a hot hitter.
Reply to foulpole75
greggborgeson
In Ortiz's early career, virtually every power hitter was using PEDs in that period. That much is clear.

Other than that, I agree with you.
Reply to BurrRutledge
sbnirish77
Could have been an opportunity to discuss MLB's policy on medical exemptions on PEDs.
Reply to sbnirish77