Back in November, Mike Fast covered most everything you need to know about pitchers’ release points. The difficulty lies in determining the value of release point consistency. Mike found that pitchers with lower variation in their release points from game to game tended to produce lower walk rates, but looking at the distance between successive release points can also provide useful information at a more granular level.

With that in mind, I looked for all consecutive pitches from one pitcher to one batter and came up with the initial position of each pitch 50 feet from home plate, according to PITCHf/x, and each pitch’s run values using the process detailed here. The sample has some biases: all plate appearances must go at least two pitches, and curveballs will appear to be released higher than preceding fastballs, even if that’s not the case. This method does remove a significant bias that often exists when doing PITCHf/x analysis—miscalibration.

Some broader trends were revealed by the data: horizontal release point probably varies more than vertical release point from pitch to pitch. Release points become ever-so-slightly less consistent as pitch count rises. Max Marchi identified pitchers who raise or lower their release points over the course of the game, and I got similar results. Those are interesting findings, but what I’m most interested in is the value of release point consistency

Below, I plot the average run value of a pitch based on its release point distance from the previous pitch; further beneath that on the same scale is the frequency at which pitches are thrown at such distances. The higher the run value, the worse the outcome from the pitcher’s perspective. 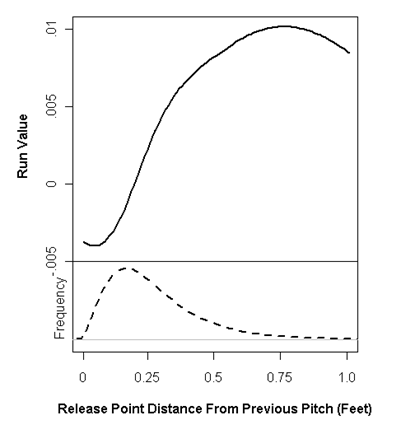 To test for whether the effect is entirely one of sampling—better pitchers are those who release consecutive pitches from consistent locations—I ran a linear mixed effect regression, controlling for the pitcher. The magnitude of the correlation between release point consistency and run value actually increased slightly. This signifies that most pitchers are better off when their release point is consistent from pitch to pitch.

There are some pitchers who survive with inconsistent release points:

And those who are best at repeating their release points:

I chose Bronson Arroyo and Derek Lowe, two starters at opposite ends of the release point spectrum, to break down further. 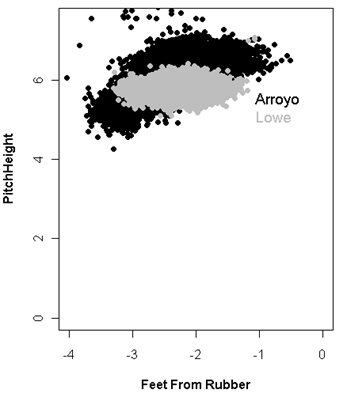 Arroyo and Lowe were on the 2004 Red Sox and have had similar success in their careers, but they’ve gone about achieving that success in very different ways. I plotted each pitcher’s run value based on the distance from the previous release point. Blue represents a lower run value, which—as indicated above—is better for the pitcher. 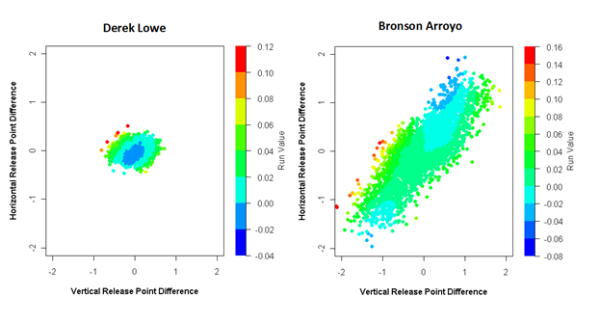 It’s clear that Lowe is best when releasing the ball in the same spot each time. Keep in mind that a different release point not only indicates that a pitcher’s mechanics have altered, but—as PITCHf/x picks up part of the initial trajectory of the pitch—that the ball may well be heading in a different direction.

Arroyo is exceptional. He varies his release point as a vital component of his approach topitching. In fact, when he has raised or lowered his arm angle considerably, he’s found his most success. Changing one’s release point can throw off a batter. The problem is that pitching is such a complex mechanical task that few pitchers can throw strikes from multiple arm angles.

A consistent release point brings success for most pitchers, although some have the ability to vary their release points and continue to throw strikes. For Lowe and Arroyo, it comes down to intent. Most pitchers, like Lowe, want to repeat their deliveries, so when they do have consistent release points, they have executed successfully. Others, like Arroyo or Jose Contreras, can throw strikes while dropping their arm angles, which can make it tougher for hitters to pick up the ball.

You need to be logged in to comment. Login or Subscribe
jj0501
I wish I would have had this as a Little Leaguer when I was
convinced changing from submariner, to over the top, to 3/4, then to a sidearmer from pitch to pitch was the way to go. The truth was I couldn't get the ball over the plate consistently from any arm angle.
Reply to jj0501
mgolovcsenko
Great stuff - thanks.
Reply to mgolovcsenko
SaberTJ
Very informative stuff thanks!
Reply to SaberTJ