After a surprising number of low-scoring games and a flurry of no-hitters, the 2010 season was quickly christened the “Year of the Pitcher,” but if 2011’s early returns are any indication, the pundits may have spoken too soon. Scoring is down for the fifth consecutive season, and not by a little: on average, teams scored over a quarter of a run less per game this April than they did last April, and unless offense picks up significantly over the next few weeks, this May will be the first full month of action in which less than four runs have been scored per game since July of 1992. The effects of the offensive drought have been felt in a number of highly visible ways. Shutouts are at their highest levels since the latest round of expansion. No-hitters are cropping up often enough that some have wondered whether the achievement is losing its luster. And as I first noted last week, after falling out of favor during the offensive explosion of the PED era, the stolen base is back in vogue.

It’s not hard to see why this is so. Sabermetricians often talk about the “break-even point,” the point at which the likelihood of a successful steal justifies the risk of getting caught. A prolific base thief who gets thrown out often isn’t actually helping his team with his wheels, since he’s doing more damage by getting erased. As this graph of runs per game and break-even point over the past 30 years suggests, the two tend to move in tandem: 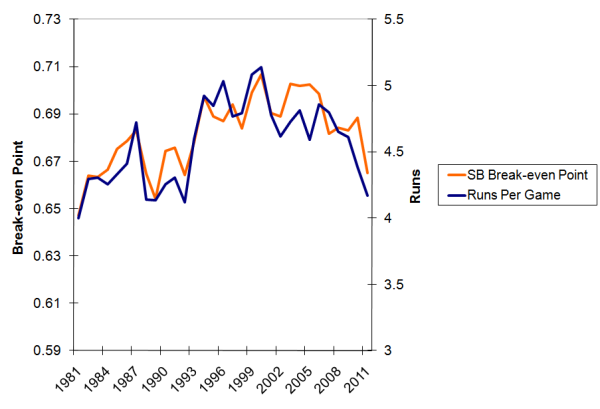 As scoring decreases, so does the penalty associated with getting caught stealing; since runners are less likely to be driven in by the batters who follow them when hits are few and far between, they have less to lose by getting erased. Earlier this decade, the break-even point hovered in the neighborhood of 70 percent. Thanks to this season’s low run totals, that figure has fallen to approximately 66.5 percent, a value straight out of the go-go '80s, the decade that helped speedsters like Rickey Henderson, Tim Raines, and Vince Coleman join Deadball-era stars like Sliding Billy Hamilton, Ty Cobb, and Eddie Collins at the top of the all-time stolen base leaderboard. The following graph reveals how the negative impact of a caught stealing has been blunted since offense began its latest ebb: 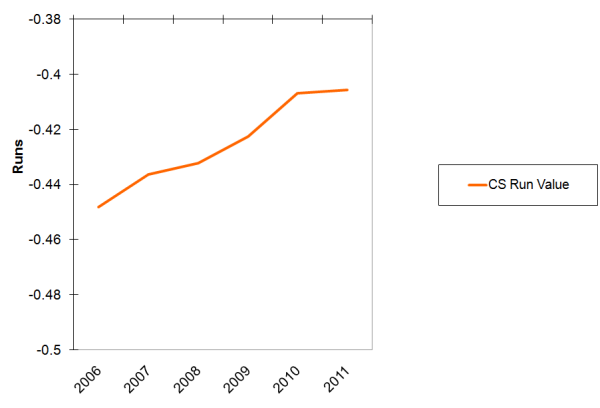 With less disincentive to run, runners have been taking off in a higher percentage of their opportunities: 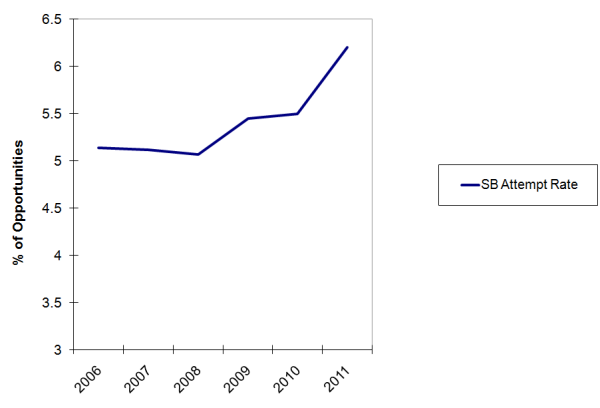 Since the offensive drought also means that fewer runners are reaching base, the full impact of this rate hike might not register in the raw totals. Still, the increase from last year’s rate to this year’s rate would result in roughly 600 more steals over a full season, given the same number of opportunities.

Confronted with an offensive environment in which pitchers are increasingly in command, it might be only natural for teams to conclude that if they can’t beat them, they might as well join them by procuring better pitchers and defenders themselves. However, while frequent 11-10 slugfests are at least temporarily a thing of the past, investing in the appreciating stolen base offers one way to make the most of the meager opportunities allowed by opposing hurlers.

Some teams are better positioned than others to take advantage of this brave new world. The following table lists the teams that have derived the most and least value in terms of expected wins from the steal this season:

It comes as little surprise that the Padres are excelling here, since they’re the team most in need of offensive assistance. Petco Park suppresses scoring to such a degree that playing there this season has been like taking a time warp back to 1968; during the original “Year of the Pitcher,” 3.41 runs were scored per game in the majors, while the Padres and their opponents have combined for an average of 3.47 per game in Petco. As a result, the Padres’ personal break-even point is even lower than the league’s as a whole, and the team has been taking advantage of that license to steal, led by Orlando Hudson—who racked up ten steals, already equaling his single-season career high, before hitting the DL with a hamstring strain—Will Venable, and off-season imports Cameron Maybin and Jason Bartlett.

The Royals, who are leading the majors in larceny, have gotten the bulk of their steals from their least productive bats: Mike Aviles, Jarrod Dyson, Chris Getz, and Alcides Escobar have combined for a .238/.291/.348 line and 28 swipes. With slash lines like those, these players are running not just for the Royals’ sake, but for their major-league lives. The Nationals have impressed on the basepaths not only via the steal, but in seizing every possible opportunity to take an extra base; even after excluding the benefits they’ve gotten from stealing, they lead the majors in BRR (Baserunning Runs), a Baseball Prospectus stat that takes into account all baserunning advances, not just those that come via the steal. (The Braves and Cardinals, who have shown poor stolen-base results, also rank last and second-to-last, respectively, in non-steal BRR.) The surprisingly successful Indians and perpetually speedy Rays just missed joining the positive entries in the table above.

The White Sox owe their poor showing here to the play of Juan Pierre. Pierre is baseball’s active steals leader, with 533 swipes to his name, but he’s been running his team out of innings this season, stealing successfully in only six out of 14 attempts. Even a reduced break-even point couldn’t make that sort of ratio acceptable, but Ozzie Guillen continues to give his struggling speedster the green light nonetheless.

There are two sides to the stolen-base coin: just as the steal’s increased value rewards an offense that employs it as a weapon, so can improved resistance to opponents’ attempts benefit a battery. Pitchers and catchers who limit the running game stand to receive the same extra credit in today’s steal-oriented game as players who leverage their legs for added offensive value. Here are the teams that have done the best and worst jobs of preventing opposing teams from striking via the steal:

The Padres, Royals, Nationals, and Blue Jays have been as adept at putting a damper on the opposition’s running game as they have at igniting their own. Ivan Rodriguez’s bat has wilted with age, but his arm remains strong: he and Wilson Ramos have each gunned down 36 percent of opposing base stealers. Oakland’s Kurt Suzuki leads the league with a 51 percent rate that wouldn’t have looked out of place in Pudge’s prime.

Despite his superb defensive reputation, the Angels’ Jeff Mathis has never been particularly adept at cutting down runners, and this year he’s been spelled behind the plate by Hank Conger, who hasn’t excelled in that area either. The Mariners' Miguel Olivo has a solid 35 percent career caught stealing rate, but has slipped to 17 percent this season. The Phillies’ Carlos Ruiz comes in at a mere 13 percent, slightly worse than Jason Varitek’s 16 percent.

Scoring could rebound just as quickly and mysteriously as it has subsided, so the steal’s potency isn’t necessarily here to stay. However, teams that learn to love the steal while runs are scarce stand to benefit in a new way from an old weapon.

Thanks to Dan Turkenkopf for research assistance.

You need to be logged in to comment. Login or Subscribe
HonusCobb
Normally I'm pretty objective about managers. I remember reading a piece in one of the "Hardball Times Annuals" about how managers can win at most 2 games and lose at most 2 games a year.

But as a Sox fan, I really would like to see Ozzie axed. I don't dislike him or anything. But last year Kenny Williams gave Ozzie more of an input on who should be on the team. Due to that, they Sox let me favorite player, Jim Thome go and brought in their platooning experiment at DH. Ozzie likes faster more athletic teams.

This year, as written above, he's letting Pierre run them out of innings. The Sox did not win the world series in 2005 because of Ozzie(small) ball. They won because of good pitching and home runs.

Regardless of where the team is in the standings, I'd like a manager that gives more credit to OBP and mashing. I've got the feeling that the only reason he's stuck with Adam Dunn through his struggles is because of the amount of money the team has paid him.