Armed with a WARP database, I trekked back to my debut article on MLB debuts. Here are the dates on which a group of players worth at least 100 career WARP debuted, as well as the names of the players who contributed the most to those totals:

You don’t see any of the all-time greats get called up in the dog days of August. In fact, you don’t see many good players at all get called up at that point in the season. Here is the quality of an average player, as measured by WARP/600 PAs, based on when he makes his first plate appearance of the season.

The best players debut early in the season, replacement-level types come up during the summer, and finally there are some decent September call-ups.

Below, I plot in blue how a player’s career progresses based on how many consecutive Opening Days he starts. The dashed red lines show how many wins a player loses when he does not start Opening Day (but still plays that year). 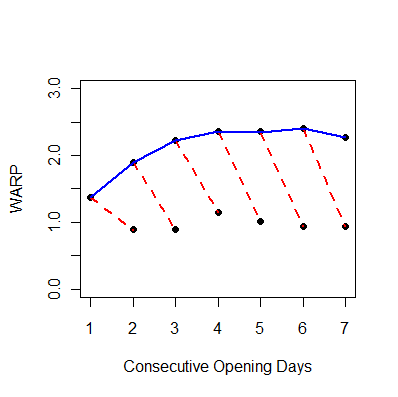 Players who maintain the same Opening Day slot in the lineup from one year to the next go from 2.8 WARP to 2.4 WARP, which indicates that you have to be a superior player to maintain your lineup slot. Opening Day starting pitchers in consecutive years average 3.7 WARP in the first season and 3.1 in the second. There have been 186 players who have gone from the field one Opening Day to designated hitter the next, and they have on average fallen from 1.7 WARP to 1.2. The group of 23 players who moved to catcher after not having played it the previous Opening Day raised its collective average WARP from 2 to 2.5.

You need to be logged in to comment. Login or Subscribe
doctawojo
I'd think that many, if not the vast majority, of players who start four or five or six consecutive Opening Days but not n+1 do so because of injury. I wonder how much that's true for the n=1 and n=2 players.
Reply to doctawojo
DAW0001
Good thing Mike Schmidt had that help in the group on his debut date....