“Too many guys pitch backward. They throw their breaking ball so much that it’s almost like their fastball is their off-speed pitch.”—Tom Glavine

On a spring day in 1984, Jim Palmer began talking to Jay Howell. The conversation likely started with pleasantries—a comment about the Florida weather, or a crude remark directed toward a female in the stands—but it developed into a dissection of Howell’s approach on the mound. Palmer, the aging Oriole, instructed Howell, then a 28-year-old Yankee, to take advantage of his fastball velocity (90-to-92 miles per hour) and establish the pitch before using his breaking stuff against batters.

Entering that fateful spring chat session, Howell had thrown 135 2/3 innings in the major leagues. His 5.97 career earned run average was ugly enough, but even that didn’t tell the full story of his ineffectiveness, as six runs scored against him had been deemed unearned. Already in organization number three, Howell was facing the possibility of bombing out of the league. He had already drawn the ire of Billy Martin, who thought him a coward incapable of high-leverage work. Yet, something clicked in 1984. Maybe it was moving into the bullpen permanently; maybe it was Palmer’s advice; more likely, it was some combination thereof.

The live arm that hadn’t been able to get outs turned Howell into one of the best relief pitchers in the American League. He fanned 109 batters in 1984—16 more than his previous career total—and both his hit rate and his walk rate dropped significantly.  As one would expect, Howell saw his runs-allowed total improve, too, as he recorded his first of three consecutive seasons with a better-than-league-average ERA.

Suddenly, Howell had tangible value instead of perceived upside. The Yankees cashed in on his newfound success by including him in the Rickey Henderson trade later on in 1984, but he would appear in 467 more major-league games after the swap, with a 2.85 ERA and 148 saves to show for his efforts.

Anecdotes like this one can open multiple avenues of thought. How many other hurlers have experienced renaissances stemming from simple changes in pitch selection? How many others could have experienced them? The first question in need of an answer is what “pitching backward” means. The most commonly-accepted definition is throwing a pitch that is unexpected given the situation—a first-pitch curveball, for instance, or a 2-1 changeup.

There are a few reasons why a pitcher would approach a hitter backward. The most obvious is to hide a weak fastball. As good as major-league hitters are, even they cannot hit a pitch never thrown. Another motivation for pitching backward has to do with game theory and keeping hitters honest and back on their heels. When most people conjure up mental images of pitching backward, though, odds are they summon images of pitchers who come with labels like “crafty” in tow.

“[Dave] Duncan has come to conclude that many pitchers pitch backward, try to be too fine on that first throw—aim for something perfect on the elusive black of the plate—because they think that they have some room to maneuver with a virginal count. But once they get behind, they have no choice but to come with something too fat over the plate.”—Buzz Bissinger, Three Nights in August

Pitching is an art form that requires constant modification and alteration. In order to sustain success on the mound, metamorphoses become a way of life. James Shields allowed 34 home runs in 2010, 26 of them coming on fastballs, and 11 of those on the first pitch of the at-bat. Although the narrative surrounding Shields’ offseason revolved around his biomechanics work, it’s clear that some thought also went into adjusting his approach. Blessed with an ethereal changeup and a plus curve, Shields has taken to pitching backward in 2011. After his first time through the lineup, Shields begins to break out his curveball—not as his knockout pitch, but rather as the pitch with which he begins at-bats. The third time through, he may go to his changeup on first pitches.

Whether Shields’ shift in style will lead to sustainable results remains to be seen, but the immediate returns have been promising. Through five starts, Shields has allowed three home runs—all of them coming in one start—and he leads baseball in complete games, with his most recent start a complete-game shutout against the Jays less than 12 months after allowing six home runs in an outing at the Rogers Centre.

There’s more to pitching backward than simply deciding to. As Glavine noted, throwing a curveball or a slider for a strike is more difficult than tossing a fastball within the zone. League-wide strike rates spell this out, with fastballs going for strikes 64 percent of the time and breaking pitches coming in around 62 percent. The extra two percent matters, since those strikes can mean the difference between 1-0 and 0-1—between getting ahead and having to, as Duncan says, toss something too fat.

There are pitchers who succeed by going in reverse, though, as PITCHf/x data from 2010 onward reveals. Before getting to the data, a quick note on why the 2010 season is included. There is a tradeoff here: the 2011 data alone would show the most recent trends, but it could be skewed by small-sample noise. Both datasets are worthy of evaluation, but for our purposes, recent trends will be disregarded in favor of a more stabilized data set.

A few methods exist for judging which pitchers pitch backward, but I’ll be identifying them based on first pitches, since 0-0 is primarily a fastball count. There are two routes to take when considering first pitches, as one can evaluate first-pitch usage either relative to or independent of a given pitcher’s overall usage patterns. Proceeding without consideration for relative usage and excluding knuckleballers, the 10 pitchers who have used the highest and lowest ratios of off-speed stuff on their first pitches are as follows (Note: Pitchers had to throw at least 1,000 pitches since the beginning of 2010 to qualify):

Let’s throw the relievers out and focus on the starters with 100-plus inning in 2010, sorted by the best and worst SIERAs. Is there a pattern to success?

Using 20 carefully selected pitchers to make a case either way isn’t going to work, so here are the SIERAs and off-speed ratios of pitchers with at least 100 innings pitched in 2010: 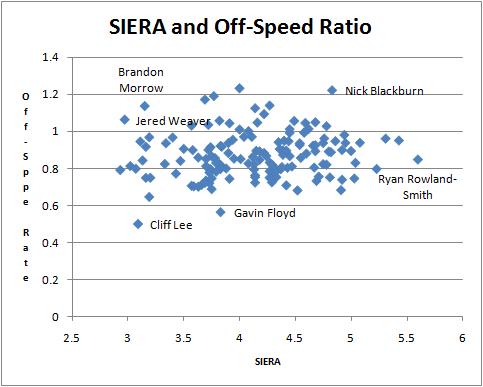 Perhaps a larger sample size would evince a clearer pattern or correlation, but for the most part, it seems that different strokes work for different folks, and that most pitches settle on a pattern well-suited to their stuff. Perhaps stories like Howell’s—and maybe that of Shields—are worth noticing precisely because a simple change in approach is unlikely to be a magic elixir capable of turning a journeyman into a superstar.

Thanks to Mike Fast for research assistance, and to Baseball Digest for the Jay Howell-Jim Palmer story.

You need to be logged in to comment. Login or Subscribe
rawagman
Thanks for publishing a study that, while the results were inconclusive, the question asked was relevant to debunking an old saw.
Reply to rawagman
buffum
It was interesting to see Aaron Laffey on the list, in that I would have sworn as an Indians fan that Laffey threw fastballs in any count or situation precisely 0.00% of the time.
Reply to buffum
timber
I've heard many times before this year that Shields pitches backwards, so it doesn't strike me that this is a new approach for him. Or did he abandon it for a while, only to return?
Reply to timber