“He deserves it. He earned it. He should have made the All-Star team last year. Right now, I think Mike Pelfrey should be the No. 1 guy on this staff.”—Terry Collins

The quote above is a variation on a theme repeated exactly thirty times per preseason. At some point before 25-man rosters are finalized and the games start to mean something, each manager makes a show of anointing his team’s Opening Day starter. The names change—in most cases, they’re more impressive than Pelfrey’s—but the platitudes stay the same.

If they so chose, managers could safely wait until a few hours before first pitch to announce an Opening Day starter. But save for cases where there’s no clear candidate and a genuine competition is required to determine rotation order, they often elect to make the assignment official long before the banners and bunting come out of storage, allowing time for the mantle of staff leadership to settle on the symbolic ace.

Anecdotally, it seems as though some skippers are getting in on the Opening Day starter act earlier than ever. Collins kicked things off by scheduling Pelfrey for Opening Day duty nearly a month before the big righty reported to spring training. Since then, a number of other managers have followed suit: Ron Gardenhire passed over 2010 ALDS Game One starter Francisco Liriano in favor of Carl Pavano, Manny Acta picked Fausto Carmona as the best of a bad lot, Ron Washington entrusted the first act of his club’s pennant defense to C.J. Wilson, Dusty Baker empowered Edinson Volquez (pending an assist from Uncle Sam), and newly-minted managers Don Mattingly and Mike Quade dispensed their inaugural Opening Day assignments to Clayton Kershaw and Ryan Dempster, respectively.

Opening Day nods are bestowed as rewards for prior achievements; as analysts often observe, past performance is no guarantee of future success. Still, starting assignments give us some insight into each manager’s internal forecasts for his staff. From a playoff odds perspective, games don’t get much less important than they do on Opening Day, but the men whom skippers task with starting the season also tend to be the ones they envision on the mound when far more is at stake (though in some teams’ cases, it's hard to envision anything being at stake at any point in the season).

How often does a manager actually select the starter who’ll go on to become his club’s ace when making his Opening Day decision? There are a number of reasons why the identities of a team’s Opening Day starter and most valuable starter might differ. For one thing, there’s our old enemy (or friend, as the case may be) regression to the mean. Most pitchers selected as Opening Day starters are likely to have excelled in the season prior, which means that they’ll tend to post less extreme—or in this case, less effective—performances as a group in the current season. We don’t have to dub it the Opening Day Jinx, but the theoretical effect is supported by the stats—since 1996, starters have averaged 2.9 WARP after earning Opening Day honors, compared to an average of 3.6 WARP in the preceding season. (Note: all WARP values cited in this article come from our latest revision of the framework, which differs from what's currently on the website.)

As is always the case when pitchers are involved, injuries can derail an Opening Day starter’s season; if Adam Wainwright’s UCL had held out six weeks longer, he might have been able to make his presumptive Opening Day appearance, only to cede the top starter slot after going under the knife. In addition, a manager’s ideal ace might be nursing an injury and unavailable on Opening Day—the situation in which Collins finds himself with Johan Santana—or even slated for a final tune-up start or two in Triple-A before making a highly anticipated debut. Finally, poor luck or random variation might allow another hurler to turn in a team’s top season despite a fine performance by the anticipated ace.

Just under eight years ago (or roughly eighty years in Internet time), Keith Woolner took a look at how Opening Day assignments worked out during the 2002 season. He found that only seven of that season’s Opening Day starters concluded the campaign as their team’s top dog. Let’s examine whether anything has changed, checking out a few other aspects of Opening Day starter performance in the process.

As it happens, thirteen (or 43 percent) of last season’s Opening Day starters went on to become their teams’ top hurlers. Those who did are listed at the top of the table below:

Thirteen seems like a sizeable leap from seven; could it be that increased awareness of advanced statistics has helped skippers learn to practice safe starting over the past decade? 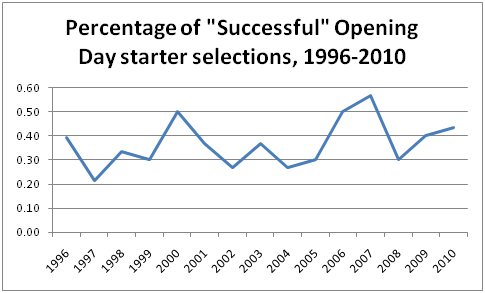 It doesn’t appear that there’s been any improvement over the period spanned by this graph. From 1996 through 2010, 36.8% of the 446 Opening Day starters went on to post the highest WARP scores of any starter on their teams. That’s not a bad success rate (it certainly beats drawing straws), but on the whole, it’s still wise to bet the field in most cases. Here’s another way to look at it—the following chart displays the number of starters who went on to be the best on their teams, broken down by starting slot. (A “seven” on the x-axis indicates not a member of a seven-man rotation, but the seventh pitcher to start a game for his team in the season in question.) 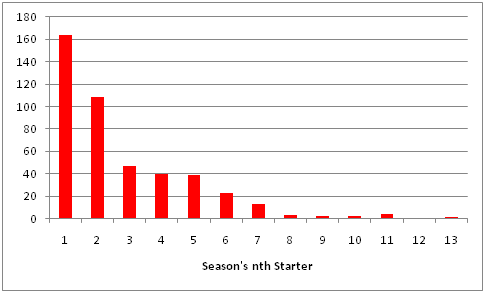 As one would expect, we see a steady decrease from left to right; the most likely candidate to steal the laurel wreath from the Opening Day starter is the guy who starts game two. For those wondering, the lonely 13th-starter-made-good at the extreme right is Luke Hudson, who had the good sense to catch on with an ’06 Royals team that tried and predictably failed to fashion an ace out of Scott Elarton. (In fact, that pitching staff was ugly enough to merit a closer look; note that that URL ends in “team_pitching::none,” which is not an exaggeration.)

As a group, the Opening Day starters had a higher prior-season pedigree than the top starters, having earned 0.7 additional WARP in season n-1. Twenty-one of the eventual top starters hadn’t pitched in the majors in the season prior, while only six of the Opening Day starters—Alex Fernandez, Scott Erickson, Carl Pavano, Jake Westbrook, Ben Sheets, and Shaun Marcum—could say the same. Slightly over half of the Opening Day starts over this 15-year period were granted to pitchers who had already earned at least one such assignment; Randy Johnson led the pack with ten, followed by Brad Radke at nine.

So which Opening Day assignments look worst in retrospect? Here are the ten worst seasonal WARP scores posted by Opening Day starters over the 1996-2010 period:

Finally, here are the 20 greatest differences in seasonal WARP between a team's Opening Day starter and top starter, topped by a few men who aren’t strangers to Opening Day starts themselves:

Game one starts are an honor, although the pride a pitcher should take in earning the assignment varies by pitching staff. Still, reveling in a managerial vote of confidence like the one Collins bestowed on Pelfrey doesn’t ensure either a successful season or a repeat engagement the following year. By the time six months of regular season have elapsed, those pre-season compliments often seem as unimaginably remote as the unsullied ERA that results from retiring the leadoff batter on Opening Day.

Thanks to Colin Wyers for research assistance.

Erickson allowed 125 runs in 1998, when an average pitcher would have allowed 141 in the same number of innings. If replacement level is around 1R/9 worse, then a replacement pitcher would have allowed 169. There are park effects and other considerations to be sure, but the simple runs tally puts Erickson in the 4-5 wins above replacement range.
Reply to mikefast
eas9898
Cool article. Thanks for the effort!
Reply to eas9898
pandroid
Does the new WARP change Ryan Dempster's wins added total from the 3.5 he accrued last year to Z-mambo's 2.6? I mean, rate-wise, Z had him, but then again, with Z's ballooned hit rate, 4.3BB/9, and 7.1 K/9, Dempster had him beat in all the repeatable measurements, as well, and Z's second half run was a little defense dependent.
Reply to pandroid