The Royals recently acquired four players for Zack Greinke and Yuniesky Betancourt, among them pitchers Jake Odorizzi and Jeremy Jeffress, who is believed to be the player to be named later.  We don't have any PITCHf/x data for Odorizzi, but Jeffress appeared in 10 games in a September callup with the Brewers and went on to pitch in the Arizona Fall League for the Surprise Rafters.  Since PITCHf/x camera systems are installed at Surprise Stadium and the Peoria Sports Complex, we have PITCHf/x data for six appearances by Jeffress in the AFL. 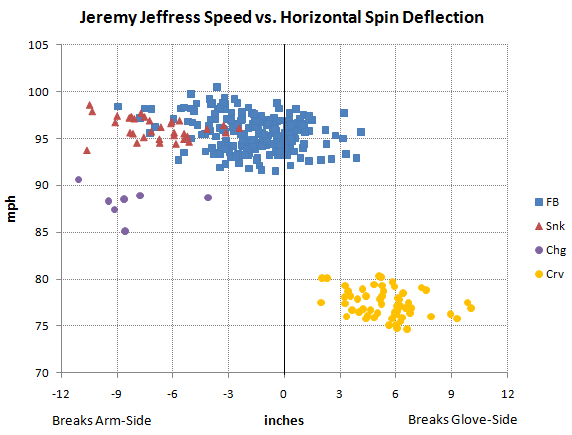 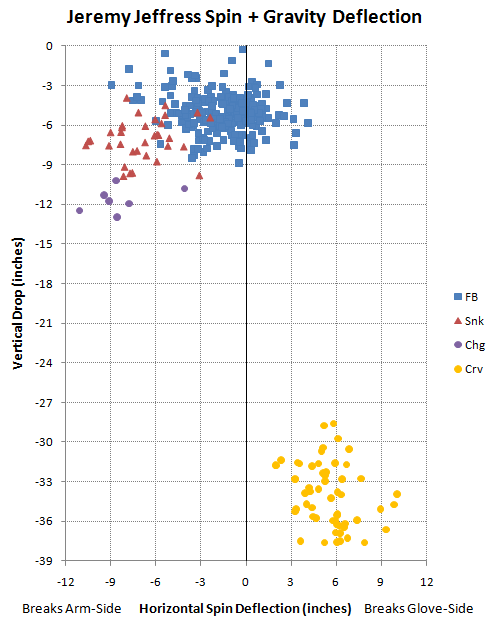 Jeffress threw a four-seam fastball that averaged about 96 mph with good hop.  He threw the four-seamer 68 percent of the time.  He mostly worked it away from lefties and on both sides of the plate to righties.  He had trouble throwing it for strikes to lefties (only 58 percent strikes) but not to righties (67 percent strikes).  He used two different grips for the four-seamer, both standard grips but rotated 90 degrees from each other.  I couldn't distinguish from the PITCHf/x data whether the two grips resulted in different movement.  You can see photos of the two grips here and here.

He threw a two-seam sinking fastball that also averaged 96 mph, with about two inches of sink and 5 inches of tailing movement relative to his four-seamer.  He threw the sinker 11 percent of the time, working away from lefties and in to righties.  He had a lot of trouble throwing the sinker for strikes, with 59 percent taken for balls.  A photo of his sinker grip is here.

Jeffress threw  a few changeups at 88 mph to left-handed hitters, most of them ending up as balls in the dirt.  You can see his circle changeup grip here.

His curveball averaged 77 mph with very good movement.  He got six inches of glove-side movement and 10 inches of drop due to spin deflection alone, which is in good company with an Adam Wainwright curveball.  Add in the effect of gravity, and his curves dropped three feet.  He mostly used the curveball against right-handers, throwing it 25 percent of the time to them, compared to only eight percent of the time against left-handed batters.  He had trouble throwing the pitch for strikes as righties mostly laid off his curves below the strike zone.  His spike curveball grip can be viewed here.  Marc Hulet mentioned that "he occasionally telegraphs his breaking ball by throwing it at a slightly different arm slot," but there is no evidence of that in the PITCHf/x data from September, October, and November.

For more on Jeffress, check out Kevin Goldstein's profile of him and this article by Joe Chandler from a year ago.