What happened to the Rockies? On July 11, the odds that they would make the playoffs were a healthy 64 percent, the highest of their season. Their third-order win percentage had hovered just below .550 for much of May and June, but their actual winning percentage stayed much more modestly around .500. But by July, the Rockies were finally bringing performance into line with expectations. Even as the surprise story of the early season—the emergence of a devilishly good Ubaldo Jimenez—began to falter, the bats came to life. In the month preceding the July 11 peak, Carlos Gonzalez batted .352/.386/.667, hit nine home runs, and stole five bases in 114 plate appearances. Seth Smith, another great terrorizer of right-handed pitching, hit .352/.413/.611 over the same stretch (albeit in just 63 plate appearances). Dexter Fowler returned from Triple-A Colorado Springs in late June and hit .280/.419/.560 in the 12 games leading up to July 11. Even Chris Iannetta, no stranger on the Colorado Springs-to-Denver express bus, rapped out a .256/.383/.615 line over the course of that month as a signal to the powers that be that he was ready to play.

On July 11, the Padres apparently slashed the Rockies’ sails. The game was in Colorado, one of the best run-scoring environments in baseball. Nevertheless, the stingy Padres (who had allowed the fewest runs in baseball), gave up seven runs but scored two runs in each of the seventh, eighth, and ninth innings to top the Rockies 9-7. A solitary two-run loss won’t move the needle much in the Pythagenpat department, but that game marked a turning point for the run-scoring and run-allowing tendencies. For the first time this season, the trend in the Rockies’ run differential had turned to the red. The following chart illustrates the phenomenon. 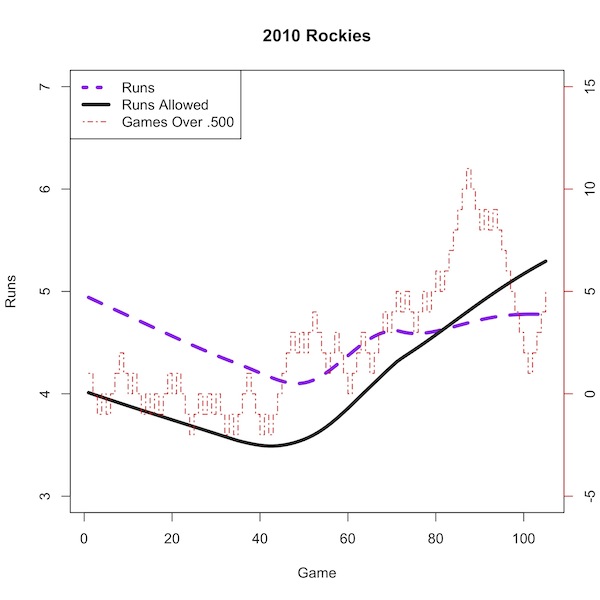 The red dashed line on the chart (read from the right-hand axis) shows the number of games the Rockies were above or below .500. As the heavy black line of runs allowed catches the sprightly, dashed purple line of runs scored, the Rockies saw their actual record take a brutal hit. They lost two of three to the Reds. Then they lost three of four to the Marlins. Next they were swept in a four-game series in Philadelphia. By the time they had lost the next two games to the Pirates, the Rockies had lost eight straight and were nine games back in the NL West. The next morning, their playoff odds stood at just 13 percent, the lowest they had been all season.

A Race as Cold as the Rockies

But the chart above is a little misleading, and there’s reason to believe the tails of the trendlines will soon cross again. Last Friday, the Rockies sent a clear message to Pythagoras as they beat the Cubs 17-2. Strangely enough, their third-order winning percentage was higher Monday morning than it had been all season (.562). That would put them on a 91-win clip the rest of the way and give them at least a fighting shot at the wild card. What’s more, the Rockies have faced the fifth-toughest schedule in the NL. Only one playoff contender—the Phillies—has faced a tougher slate of opponents.

In short, the Rockies have already hit rock bottom. In fact, they’ve begun to dig their way out. Winners of four straight, the Rockies should be able to cover for the likely loss of Dexter Fowler with their cadre of talented outfielders. In the wake of Fowler’s impending DL trip, standing pat at the deadline and refusing to trade any of their bats or starter Aaron Cook looks wiser and wiser. The Rockies have eight more games against the Giants (five at home), 12 more against the Dodgers (six at home), and six more against the Padres (three at home). That’s a lot of games against divisional teams holding playoff aspirations, and a streaking Rockies team could yet make the NL West race interesting.

The trouble for the Rockies is that they don’t have many games left against the other NL wild-card contenders. They host the Reds for a four-game set in early September, which is a good chance to make up ground. They play four in St. Louis to close out the season, but the Cardinals appear to be gaining steam in the Central. The Rockies have three at home against the Braves, but at 70 percent, Atlanta is the favorite to win the East. That leaves just the Phillies, who after their recent four-game sweep, will give the Rockies the satisfaction of only one more game.

As the chart above shows, the turnaround will have to start with superior performances from the pitching staff. Since the All-Star break, Rockies pitchers have given up more runs (4.05 ERA before the break, 4.60 after) despite striking out more than a batter an inning (146 K in 144 IP) and limiting walks at about the same rate they had before the break. Many have focused on Jimenez’s recent struggles, but reasonable expectations have to be that he returns to a medium somewhere between his mediocre June and stellar May. In fact, given their home park and with particular emphasis on peripheral stats, the Rockies’ biggest asset may be their pitching staff.

The hitting remains a bit of a mystery. The most striking split this lineup has produced is the yawning gulf between their home and away performance. On Blake Street, the Rockies have collectively hit .304/.374/.494. On the road, the bats have feebly managed a .229/.307/.363 line. I’m as skeptical about home/road splits as the next saberist, but even after we expect those numbers to revert to the mean the evidence is clear the hitters are more successful at home. The point is illustrated starkly by the splits of their opponents, who have hit worse in Coors Field (.251/.311/.388) than they have at home (.257/.336/.390). I doubt the trend will continue in such relief (what trend does?), but it certainly explains the Rockies’ struggles on the road this year (they’re 20-32). As the split narrows, the Rockies should improve on the road, and perhaps in the standings.

Question of the Day

Are the Rockies’ 26 percent playoff odds a mirage, given the number of teams they have to leapfrog and games they have to make up? What strange alchemy gives them the highest third-order winning percentage in the NL?

You need to be logged in to comment. Login or Subscribe
Oleoay
"Last Friday, the Rockies sent a clear message to Pythagoras as they beat the Cubs 17-2."

Looks like the opponents have hit better (though slightly) at their own home (.336 OBP/.390 SLG) than at Coors (.311 OBP, .388 SLG), unless you're only looking at the first number which I'm assuming is batting average and I'm not sure a six point difference between .251 and .257 is all that significant. Given that, I'm not surprised that "Since the All-Star break, Rockies pitchers have given up more runs (4.05 ERA before the break, 4.60 after)" because the Rockies have played 11 games on the road since the All-Star break versus 6 at home... and those 11 games were against the Reds, Phillies and Marlins which have scored the 1st, 4th and 7th(tied) most runs in the NL... in other words, quality offensive teams. But, since it's just 11 games, I think it's also a sample size issue and the "higher road ERA" will even itself out when they face the Pirates on the road for a four game series starting this Thursday.

But to answer your first question, I think the Rockies' odds are at about 26% now that Tulowitzki has returned and the wild card spot only 5.5 games out of reach. The key might be how long Fowler is out for and, if Hawpe then has to return to the outfield, what performance they'll get out of first base.
Reply to Oleoay
tbsmkdn
Yes, that should be "... who have hit worse in Coors Field ..."

Thanks for the catch.
Reply to tbsmkdn
jdouglass
To play devil's advocate to the sample size argument re the 17-2 game, I don't think you can invoke sample size in this way when we're talking about Pythag, because any +15 run differential--whether added over a game or over ten games--impacts Pythag.

Take the Brewers. Remove four games v Pittsburgh in April and their Pythag drops under .390. But the almost +50 run differential in those games is a real run differential, and it does have an impact on Milwaukee's first-order Pythag, regardless of how many games in which that scoring margin was attained. +50 is +50 as far as first-order Pythag is concerned.
Reply to jdouglass
benharris
That one game left against the Phillies could have more effect than at first glance. Sure it's just one game, but they play a crucial series against the Giants before it, fly to Denver for the game against the Phillies, then fly back to San Diego for another big series. Instead of an off day in California they'll have to deal with a pretty tough trip. I'm not sure what effect such travelling has on a team, but I'm pretty sure it doesn't help.
Reply to benharris
BobbyRoberto
This article opens with "What happened to the Rockies?"

Well, they went on the road, where they stink, and faced three good teams and lost 9 of 11.

Despite the humidor, some key Rockies' hitters have been terrible outside of Coors Field this year, Carlos Gonzalez among them:

Reply to BobbyRoberto
Oleoay
Wow I didn't realize that about Gonzalez...his strike out rate is also twice as high on the road as it is at home. That's kind of scary... and almost inexplicable?
Reply to Oleoay