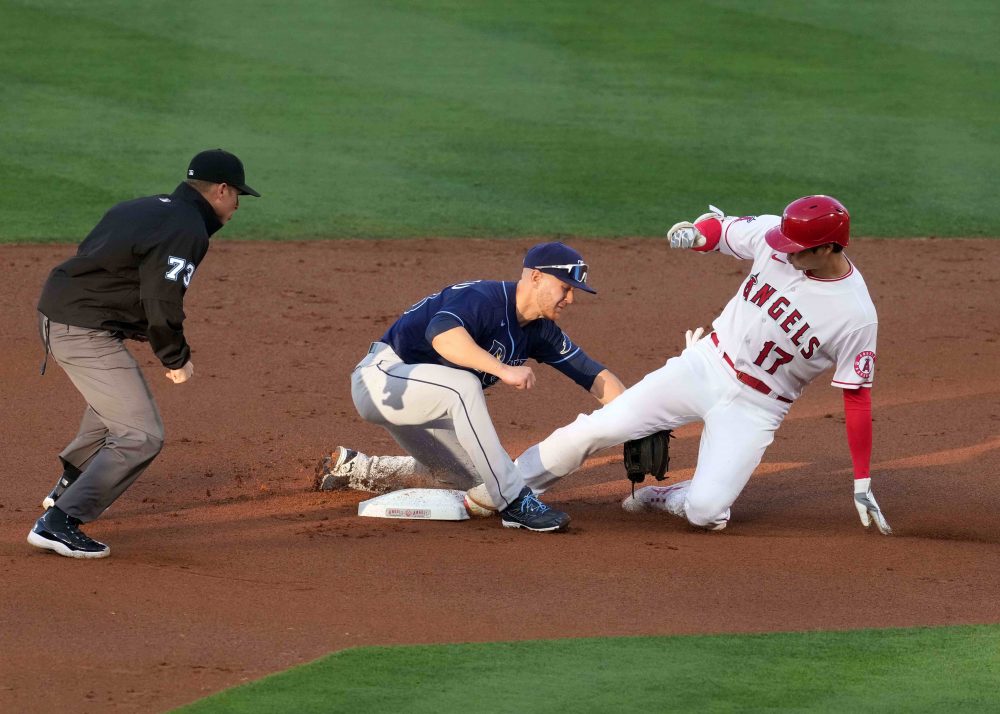 I have a confession to make: It has been a real wrench not talking about Shohei Ohtani, the two-way superstar, in every edition of Need for Speed.

The baseball world has—quite rightly—been marveling at Ohtani’s incredible combination of pitching excellence and awesome power. His athletic talents, however, also extend to superlative baserunning that would have made many more appearances in this series if not for my diligent efforts to feature a broad range of players. After all, I want to offer actionable fantasy advice, and it’s helpful to give someone other than Ohtani the opportunity to feature in Stolen Base of the Week. Because, let’s be honest: While having Ohtani’s speed on your fantasy squad is incredible, acquiring it is virtually impossible due to the season he’s having.

Fortunately, Ohtani Week means that I can abandon my usual restraint and instead focus on his baserunning prowess in all its glory. Next week, we’ll resume our regularly-scheduled programming. Today, it’s all Shohei, all the time.

One major concern that we, as fantasy players, might have reasonably had coming into the season was that Ohtani would cut back on his base-stealing. His career rate prior to 2021 had hovered around a respectable 10 percent. Given his struggles to stay on the field and a previous season-ending knee injury, though, it was reasonable to ask whether Ohtani or the Angels would determine that it was rarely worth the risk for him to run. He still would provide so much on both sides of the ball.

Any restraint from health concerns hasn’t materialized. Instead, Ohtani has attempted a steal in 14.5 percent of his 110 opportunities. That is not only comfortably above the league average, but it also ranks 18th in baseball amongst players who have had at least 50 chances to steal. He has succeeded at a strong 75 percent rate, maintaining his consistent success on the basepaths. Ohtani is now 41-for-53 on stolen bases in the majors.

That success rate speaks to Ohtani’s excellent speed. His 28.8 feet-per-second sprint speed ranks in the 92nd percentile this season, as does his 3.51 second 80-foot split. That’s as fast as Ozzie Albies and Tommy Edman, and it’s ahead of Starling Marte. Ohtani’s running has put him on pace for a rare 50-20 season, a feat only accomplished four times in baseball history.

But we’re not here to talk only about the stats. Ohtani is also an incredible baserunner to watch, as his success is built upon both his speed and his technique. Any regular watchers of the Angels’ star will know that he sensibly slides feet-first, far reducing the risk of any hand or arm injuries that could spell disaster for his pitching. The way that Ohtani slides goes beyond that injury prevention, though, and actually makes it harder to tag him.

Take this steal against the Mariners in early May. Tom Murphy makes a great throw after Ljay Newsome’s pitch, putting the ball right in line with Ohtani’s path to the base and making Dylan Moore’s life very easy. There’s just one issue: Ohtani’s sliding technique allows him to approach the bag on the very outside corner, keeping his body valuable extra inches away from any potential tag and adding crucial hundredths of a second to the process for an infielder.

Where head-first sliders leave themselves vulnerable by providing a huge target of essentially their entire upper body, not to mention approaching the base more centrally, Ohtani keeps his body away from the fielder. He also has more maneuverability by staying on his feet, plus more control of his deceleration and position on the base, which in turn allows him to approach at high speed.

A clear illustration of this can be seen below, in a freeze-frame of where Ohtani is when the ball hits Moore’s glove. 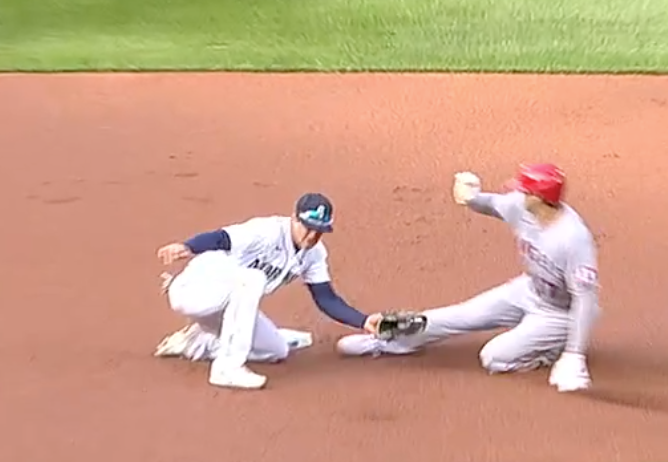 If Ohtani is a conventional head-first slider, he’s out on this play. Moore’s glove is probably in contact immediately given the placement of the throw, and if not, it’s the work of an instant to apply the tag. Instead, Ohtani’s able to get his foot on the base before Moore can tag him, and he elegantly stops on a dime to ensure that he remains on the bag. Ohtani approaches his steals like this every time, and it’s far from the only occasion that he has turned a potential out into another success.

There might be no better example of Ohtani’s mastery on the basepaths than his game-winning trip around the bases two weeks ago. He successfully stole second against Paul Fry and Pedro Severino in the ninth, only to be sent back to first base when Anthony Rendon’s backswing connected with Severino’s helmet. The Orioles were primed for an Ohtani steal, but that didn’t stop him. He repeated the trick to put the winning run in scoring position. Once again, Ohtani’s body position makes things so difficult when it comes to applying a tag that Ramon Urías’s effort does not make contact with Ohtani until it brushes his face right at the very end of the tag attempt.

Two successful steals of the same base wasn’t enough. With the outfield playing in, Ohtani is nonetheless sent home when Jared Walsh singles to right and, using the same technique on his slide, evades Severino’s tag. Keeping his right leg outstretched and low to the ground and his hips back away from the basepath, Ohtani was able to sweep his right foot across the outside of home plate while Severino desperately had to reach out for a tag much further away from the plate. Ohtani’s slide technique and body control thus again made him safe in a situation where most players would be out.

Even the occasions where he gets caught illustrate just how good Ohtani is. Throws have to be so perfectly on the money that the infielder has little to do but let their glove continue its course into his path. Austin Hedges managed it in May, on a play that drew a review from Joe Maddon. Tom Murphy got it right immediately before the All-Star Break. There’s no room for error on these plays. We’ve seen how the slightest delay or a throw that’s a touch high will give Ohtani more than enough time to succeed.

Ohtani’s close calls on his caught stealings suggest that his success rates may even climb as the season progresses. Expecting even more would be greedy, of course, but Ohtani’s the kind of player who makes us expect more. Keep reveling in Ohtani’s sparkling starts or monster home runs, but don’t forget to take a few moments to watch him on the basepaths, too. You won’t regret it.