“A girl cannot tell a man when exactly he must do a thing. A man cannot make a thing happen before it is time.” – Jaquen H’ghar

Rookies can be especially difficult to evaluate, as they can (ahem) wear many different faces. Rarely has this concept been more evident than with the 2017 rookie campaign of Aaron Judge. The Yankees selected the 6’7” behemoth in the first round of the 2013 draft, and Judge immediately hit the ground running in his first professional season, doing what he does best: slugging dingers, taking walks, striking out and, as an added bonus, inspiring truly awe-inspiring judicial puns. The slugger made quick work of the minor leagues, earning a cup of coffee with the big club in September 2016.

His modus operandi on the way up stayed relatively constant. Upon a promotion, Judge would struggle (especially with contact issues), before making adjustments that allowed him to utilize his supreme physical gifts (seriously, there are huge dudes and then there’s Judge). The struggles were featured front and center last season, as the 25-year-old slashed .179/.263/.345 in his first tour of the Bronx, striking out in an unfathomable 44 percent of his plate appearances. Things were so bleak, that there was even talk about whether Judge would make the team out of spring training (ah, March, it was a simpler time). Well, uh, he did make the team.

His Honor set the baseball world ablaze in the first half, launching 30 homers (most of which were majestic, tape-measure blasts) and hitting .329/.448/.691. Judge’s breakout sparked conversation of yet another new face for the rookie, The Face of Baseball. All-Star Weekend in Miami served as Judge’s coronation (or swearing in, if you will), where outsized expectations were thrust upon the outfielder, despite not yet having a full season under his belt.

So here’s where the next face comes in. Judge went from The Face of Baseball to the face of the Yankees’ bench by the end of August. OK, so that’s not totally fair, as nagging injuries (and the curse of the Home Run Derby) likely played a role in his decline, but Judge struggled enough that manager Joe Girardi saw it fit to give his rookie sensation a few days out of the lineup to clear his head.

It has been before, and it will be said again: The league is all about adjustments. Judge torched opposing pitchers in the first half, seeing pitches in the zone around 40 percent of the time, while swinging at almost 42 percent of those offerings. Despite an above-average swinging-strike rate, he didn’t chase a ton of pitches outside of the zone. 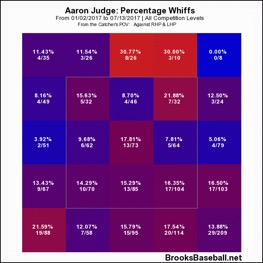 The swing-and-miss will always be a part of Judge’s game, but in the first half, he didn’t chase too many pitches, which led to his extraordinary performance. Nobody in baseball, not even The Mighty Giancarlo Stanton (don’t @ me), hits it harder than Judge. When he doesn’t chase, he’s almost impossible to consistently retire. 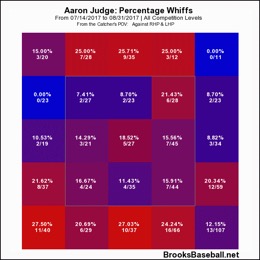 From the All-Star break to the end of August, pitchers adjusted, giving Judge fewer pitches to hit and approaching the strike zone only 37 percent of the time (a number which would rank among the league’s lowest over a full season). Judge didn’t adjust right away, swinging at 43 percent of the pitches he saw, including increasing his chase rate by nearly five percentage points. The extra whiffs cratered Judge’s production, as a .179/.346/.344 line (with a strikeout rate over 35 percent) during this 191 plate appearance stretch earned him a brief, albeit deserved, demotion in the lineup.

Then September rolled around, and Judge adjusted back. 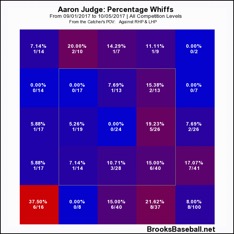 In 121 September plate appearances, Judge swung at fewer pitches, cutting his swing rate by over six percentage points and his swinging-strike rate by almost five percentage points. He still struck out a lot (26 strikeout rate), but he also walked a ton (23 percent walk rate) and punished the balls he did swing at to the tune of .311/.463/.889 (!) with 15 home runs.

Obviously, there is work left to do. Pitchers are going to make a corresponding move and the entire cycle will start over again. Having said that, it’s extremely encouraging to see a rookie (especially one already so prone to striking out) make adjustments to right the ship. If Judge can continue this development, it’s very likely he will add Face of the Franchise to the Many-Faced God. Valar Dohaeris.

Heading into the season, Judge was the 78th outfielder off the board (fourth on his own team), behind such luminaries as Jorge Soler, Tyler Naquin, and Ben Revere. It’s safe to say, he’s going to make a bit of a leap heading into 2018. Even in today’s homer-rific climate, prodigious power like Judge’s is still super valuable. However, the real measure of his worth on the fantasy landscape might be tied to his batting average. If Judge can maintain the adjustments he displayed in September, and be a .270-.280 hitter, he’s likely a top-25 asset. If the 2017 season marks the high point for his average, Judge is still a top-10 outfielder, but the upside is a little more limited. Either way, if his rookie season is any indication, there will be a lot of good, a lot of bad, and a lot of hyperbole moving forward for the slugger. I’m looking forward to it. Court is adjourned.