“You never know what worse luck your bad luck has saved you from.” –Cormac McCarthy, No Country For Old Men

The Rockies selected Gray third overall in 2013 with the expectation that he would evolve into a frontline starter someday. From a fantasy perspective, it was difficult to envision a worse landing spot for the Oklahoma native than Coors Field. There were never any questions regarding his prodigious raw talent. Clearly, Gray possessed the type of power arsenal that could conquer the Mile High monster. However, it was justifiable to remain skeptical of an organization whose last (and only) real player development success stories (from a pitching standpoint) over the last quarter century are Ubaldo Jimenez and Jhoulys Chacin. Let’s not forget about TINSTAAPP, either.

The flame-throwing righty breezed through the Rockies minor-league system, making just 24 starts at Double-A and Triple-A over two seasons before being called up Aug. 4, 2015. He was lit up like a Christmas tree during his initial exposure to big-league hitters, posting a 5.53 ERA with 40 strikeouts and just 14 walks over nine starts to close out the year, but followed it up with arguably the best rookie season in franchise history in 2016. Over 29 starts, the 24-year-old recorded a 4.61 ERA (3.95 DRA) with a staggering 185 strikeouts and just 59 walks over 168 innings. After becoming one of just 16 starters to qualify for an ERA title and strike out more than a batter per-inning (9.9 K/9) in 2016, fantasy owners were finally willing to overlook the stratospheric risk in his profile. Per NFBC average draft position data, Gray was a consensus top-50 starting pitcher (180th overall) in fantasy drafts this spring. Unlike the vast majority of pitching prospects that have crumbled under the weight of Coors Field since 1995, Gray embraced the unique challenge head-on, and appeared to be on the precipice of fantasy greatness.

On April 13, during the third start of his sophomore campaign, Gray made a fateful decision to leap off the mound to snag a high chopper and fractured his left foot in the process. The injury sidelined him for more than two months. Once he finally returned to the rotation June 30, he made it through his final 17 starts unscathed. The greatest predictor of future injury for pitchers is past injury history, but the fact that Gray’s issues were not arm or soft tissue related alleviate the majority of his injury concerns moving forward. Aside from the missed time due to injury, Gray was phenomenal in 2017.

The self-professed avid ghost hunter has taken enough of a break from paranormal activity to overhaul his repertoire in recent seasons. He’s eschewed his changeup in favor of a mix of hard-biting 90 mph sliders and a rapidly progressing 80 mph curveball over the past two seasons. He’s still rocking the overpowering mid-90’s premium fastball velocity, but the ability to juxtapose it with a pair of breaking balls that contain more funk than Austin Powers has enabled him to blossom into one of the games most exciting young strikeout artists. 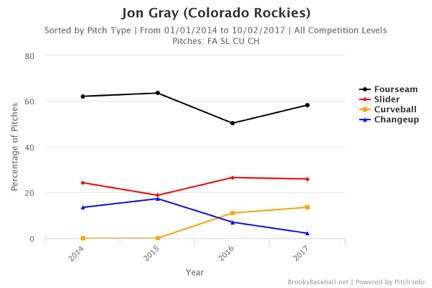 “The more and more I use it, the better it gets,” Gray told The Denver Post after a dominant mid-July outing. “It’s a feel pitch. It can’t be thrown lazy. But whenever it’s thrown well, it’s a really good pitch. And it’s a ground-ball pitch. It’ll be a weapon.”

Over his final 17 starts, Gray posted a 3.58 ERA with 103 strikeouts and just 23 walks over 98 innings of work. What makes those numbers even more impressive is that he was snakebitten by a grossly inflated .344 BABIP during that span. The strikeout totals alone are enough to make fantasy owners drool, but the fact that he’s harnessed his control, slashing his walk rate from 3.2 BB/9 in 2016 to just 2.4 BB/9 this season, is even more reason for optimism. Per the indispensible Baseball-Reference Play Index, Gray was one of just 13 starters (minimum 100 innings) to strike out over a batter per innings while issuing under two and a half walks per-nine. The rest of the list:

The starting-pitching landscape has undergone a dramatic transformation in recent years, which is best illustrated by the reduction in starting-pitcher workloads. The halcyon days of starters pitching into the late innings and racking up 200-plus frames over the course of a single campaign are fading to dust. Only 15 starters eclipsed the 200-inning plateau this season. Given that there are so few options remaining that provide elite ratios and innings, a starter like Gray who has perceived injury question marks and the obvious Coors Field risks in his profile becomes less of a risk than he would’ve been even five years ago. There is a buying opportunity here for savvy fantasy owners in long-term formats and there is no question that Gray should be one of the most coveted starters in fantasy baseball next season.