Michael Taylor entered the season with limited fantasy value. The addition of Adam Eaton made Taylor the odd-man out in Washington’s outfield. However, injuries to several players (Eaton and Jayson Werth) have made playing time available. The 26-year-old is running with the opportunity, and he started to draw serious interest from fantasy owners.

Taylor saw the biggest change in ownership rate at CBS (19 percent to 48 percent) over the past week. Similarly, he saw the largest increase at ESPN (4.5 percent to 39.3 percent). In Yahoo’s latest “Transaction Trends,” Taylor was a top-10 addition in the outfield. He’s currently a top-50 outfielder by ESPN’s player rater, and he’s been providing owners with positive values in every standard fantasy category.

Taylor is hitting .279/.316/.511. These numbers all would be career highs. He also looks poised to set career bests in homers, runs scored, RBIs and stolen bases, but are there reasons to think this level of production will continue? If so, he’s worth a look in your. Let’s take a deeper dive into Michael Taylor’s number in this week’s Buyer’s Guide.

As mentioned above, Taylor is putting together the best offensive season of his career. Fans might be tired of hearing about the “fly-ball revolution,” but Taylor seems to be getting in on the act. His FB% has jumped from 29.6 percent to 36.9 percent. Unlike other hitters seeing a spike in their home-run totals, Taylor is hitting the ball the other way much more often than a season ago. To be fair, all but three of Taylor’s home runs have been hit between center field and his pull side.

What’s led to this increased production from Taylor? One factor seems to be that he’s driving balls low in the zone for power. The following two charts compare Taylor’s HR/BIP totals from 2014-2016 and 2017. 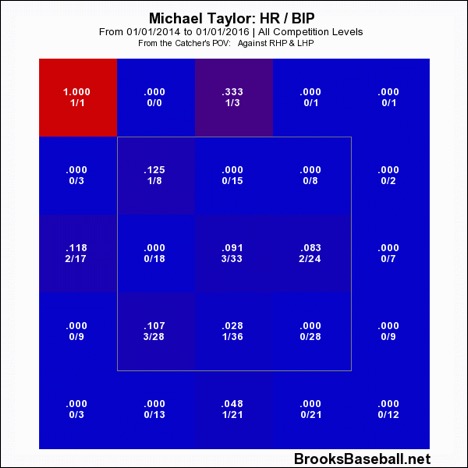 Seven of his 11 home runs have come on balls down in the zone. 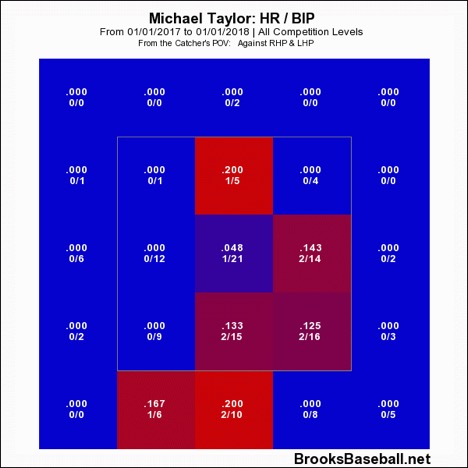 The other trend that will make Taylor owners optimistic is how he’s handling pitches on the outer half of the plate. Taylor has experienced a noticeable increase to his batting average on pitches in those locations. Below is Taylor’s zone profile by batting average from 2017: 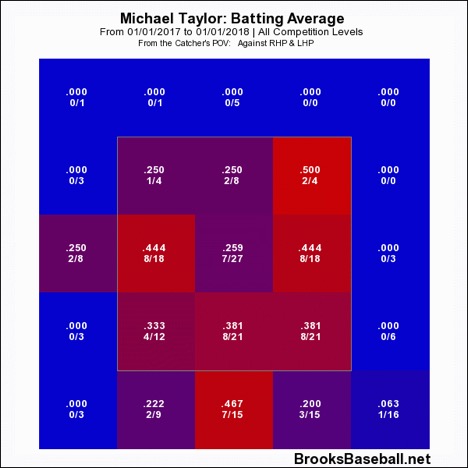 There’s another point in Taylor’s favor if you’re considering adding him to your fantasy roster. Over the weekend, Dusty Baker finally moved him up in the lineup. Taylor’s value in several categories was limited because he was regularly hitting toward the end of the lineup. However, over the past three games he’s hit either first or second. If this continues, it bodes well for his ability to score runs and steal bases. This development makes Taylor a more attractive option.

Even with the changes to Taylor’s approach there are a few glaring issues that might make owners skittish. There’s still a ton of swing and miss in Taylor’s profile. His strikeout rate has remained north of 30 percent (32.4), and he boasts one of the 25 worst swinging-strike rates (15.6 percent) among players with at least 100 plate appearances. It’s understandable to be excited by Taylor’s production. However, it’s hard to trust a player who couples a sub-70 percent contact rate with a track record of not hitting for power.

There’s also the issue of Taylor’s BABIP. For his career, Taylor’s had a higher BABIP than average, but this season it’s jumped to .376. Eventually, that number is going to come down and it’s going to bring Taylor’s average down with it. It’s taken an unusually high BABIP to make him a .279 hitter, and owners should be ready for him to hit something closer to his .240 career average. It’s unlikely he’ll contribute positively to your roster in this category the rest of the season.

Taylor did miss a game this past week because he was “a little injured,” according to Baker. Chelsea Janes of the Washington Post noted that Baker was unwilling to be any more specific, but it is something to keep an eye on. For what it’s worth, it hasn’t kept Taylor out of any games since that night.

There’s one type of fantasy owner who should invest in Taylor. If you’re in need of stolen bases, then Taylor is probably one of the better options available. He’s got the chance to provide you with a little bit of value in other areas, and Washington has shown a willingness to run. In this case, he could be a beneficial option off your bench who’s going to get regular playing time for now.

However, there are simply too many red flags in Taylor’s profile to make him a season-long option. If you want to ride out his recent hot streak, that’s understandable. Since June 19, Taylor is hitting .395/.442/.763 with three home runs. It might be a good time to see what you could acquire for Taylor in a trade given his recently elevated profile.

Eventually, the BABIP will come down, and that will drag his average back to something around his career norm. It’s possible he’s taken steps forward and has developed as a hitter, but you can’t trust him for positive value in the average category just yet. As the average comes down, so will his opportunities in every other category. The amount of strikeouts makes it likely you could get a lot of empty nights from Taylor, and for those reasons I’m staying away at this point.

You need to be logged in to comment. Login or Subscribe
olatan
I understand your sell recommendation in a mixed league... but in an 11-team NL only, it feels like he would still be a buy, maybe even a strong buy. do you agree, or his value still limited to stolen bases?
Reply to olatan
Ericocc
In an NL-Only, I'm definitely hanging on to him. If I can remember, I'll start making that distinction when I write my conclusions.
Reply to Ericocc