It took 118 years before the first “Zack G.” graced Major League Baseball. We all know about Zack Greinke. He’s good at pitching, and has admirably represented Zack G.’s everywhere. However, now there’s a new Zack G. stealing some shine, and he just so happens to share a rotation with Greinke. If getting ground balls is divine, Zack Godley has been downright heavenly this season and has emerged as a key member of the Diamondbacks rotation. While the start has certainly been impressive, his intervention has been anything but expected.

There’s no way around it. Godley was bad last year. The 27-year-old spent time in Double A and Triple A before getting the call and bouncing between the rotation and bullpen. He wasn’t effective in either role, carrying a 6.39 ERA with a similarly bloated 1.49 WHIP in 74 2/3 innings. Godley had a supremely difficult time finding the plate, as his 39.6 percent zone rate would have been third lowest in the league (he didn’t have enough innings to qualify). Finally, Godley could not figure out lefties to save his life, and got lit up to the tune of .281/.373/.519, or basically 2017 Kris Bryant. So, yeah, not a lot of silver linings.

Then, the proverbial switch was flipped. A light came down from above and Godley ascended into big-league pitcher paradise (Tired of celestial word play? Fine, me too.). Through nine starts the former Tennessee Volunteer has been lights out, en route to a sparkling 2.53 ERA, which is a team best. He even has managed to strike out a few more guys, fanning nearly a batter per inning while riding a 13.8 percent swinging-strike rate, 10th best in baseball for pitchers logging at least 50 innings. His .205 TAv against ranks fifth best in the league, behind only Dallas Keuchel, Max Scherzer, Alex Wood and Chris Sale. In the words of sage bard Larry David: Prett-ay, prett-ay, prett-ay good.

So, what happened? How did he do it? Can he keep it up? When will I stop asking rhetorical questions?

It appears Godley has made significant changes to his pitch mix and zone profile. His reliance on a cutter has decreased each season, and the 21.2 percent usage rate in 2017 is down over 20 percentage points from his 2016 profile. Instead, Godley has leaned on his curveball, a pitch that he throws about 29 percent of the time and gets nearly 25 percent whiffs, along with the crown jewel of his new and improved arsenal, the sinker. A year ago, Godley threw the pitch in nearly a quarter of his offerings. This season he has increased that number to over 37 percent, and has been rewarded with ground balls in nearly 70 percent of batted balls.

In addition, Godley has been better at trusting his stuff in the zone. As mentioned above, he had one of the lowest zone rates in the league a season ago, and faced an especially difficult time keeping his sinker in the strike zone. He almost never kept the pitch competitive. 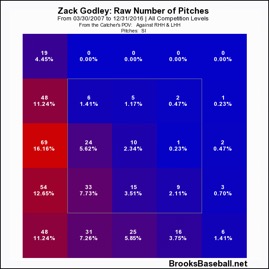 This year he has been much better, offering up the sinker and letting hitters pound it into the ground. The result? An elite level ground-ball rate of 62 percent, placing him in the top five in the category. 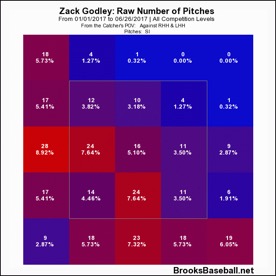 The increased sinker usage also has helped Godley keep the ball in the yard. The pitch has yielded a 0.64 percent home run rate this season, helping him to fend off the growing trend of long balls in the game. While his 0.6 homers per nine innings seems hilariously low, it comes with a 12.9 percent HR/FB, which isn’t very far from his previous career levels. Godley even has fared better against left-handed hitting this season, again increasing sinker usage at the expense of his cutter. The results have been impressive, as he has limited lefties to a line of .205/.277/.353 in 23 2/3 innings (yes, it’s a small sample, but still).

While Godley has been a welcome surprise for the Diamondbacks this year, it might not be all sunshine and rainbows moving forward. He is stranding runners at an 80 percent clip, a number over seven percentage points higher than league average. Batters are hitting only .246 on balls in play, and his 2.92 DRA is slightly higher than his 2.53 ERA. Godley pitches at Chase Field, so while he has been great at keeping the ball on the ground, one mistake could change that in a hurry in such a hitter’s haven.

Having said that, Godley’s start still looks relatively legit. The elite ground-ball and swinging -strike rates make for a deadly combination that should provide a solid baseline and help Godley avoid disaster outings. Even with some regression likely on the horizon, it appears he has solidified his place in the rotation and should provide great rates and acceptable strikeout totals for the foreseeable future, making him an interesting SP 3-4 option. There’s a lot to like here with Zack G. Amen (sorry, had to get one more in).