If you rely on sports radio or shouty talking heads, David Price’s first year in Boston was an unmitigated disaster. Another playoff struggle led to so many fun, informative, well-reasoned, inspired…oops sorry, blacked out for a second…I meant mind-numbing rants about clutchness and #thewilltowin. However, if you dug a little deeper and rely on the numbers, he was, well, very David Price.

Heading into 2017, I loved Price as an under-the-radar (well, as under-the-radar as you can be for a $200 million pitcher) target. But an elbow injury flared up in spring training, muddying the waters as to his 2017 effectiveness. The former Cy Young winner is back, making Chris Sale the third-most accomplished pitcher in the Red Sox rotation. Three starts into his comeback, the results have been…mixed.

In his first two outings, Price tossed 12 innings, striking out 11 batters to only three walks. He gave up a pair of homers, but in today’s climate, a homer and a half every nine innings isn’t an awful number. The success could be attributed to a slightly different pitch mix from previous seasons, as the 31-year-old relied on his four-seamer more than any other campaign since 2010. In addition, he cut back on throwing a curve, instead leaning on a cutter, which he threw 27.2 percent of the time, getting 18.7 percent whiffs. Perhaps most importantly, Price’s velocity hovered from 93-95 mph with his fastball, and touched 97 mph in his first outing against the White Sox.

Then came the Yankees.

A season ago, Price’s woes stemmed largely from blow-up starts. He gave up five or more earned runs in eight starts last year, four of which came before mid-May. Those troubled outings were hampered by homers; he allowed 30 dingers in his 35 starts, a career high. Trouble with the long ball reared its ugly head again in Price’s most recent start, in the Bronx. The Yanks tattooed the lefty, scoring six runs in five innings. The silver lining, I guess, is that he doesn’t have to face Gary Sanchez every time out, as the catcher launched two more bombs off Price, bringing his career total to four home runs in nine plate appearances.

Price again had success with his cutter. He threw the pitch in just over 20 percent of his offerings, and while he didn’t get the whiffs, he did hold the Yankees to a .250 slugging percentage with the pitch. While it’s never enjoyable to get lit up, Price maintained his velocity, averaging 94 mph with his fastball and pushing 97 mph with his sinker. For a pitcher coming off a near-disastrous elbow injury, we need to take the small victories when they present themselves.

Obviously, it’s only three starts. Price had an ERA approaching 7.00 well into May last season too. In fact, Price has notoriously been a slow starter in his career, posting a 4.08 ERA in 240 1/3 March and April innings. Having said that, there still are reasons to worry that Price isn’t quite, um, right. Even during his early season scuffles last year, he was still fanning well over 10 batters per nine innings, while remaining stingy with the free passes. His presence in the zone this season just hasn’t been the same. For his career, Price has thrown 47.1 percent of his pitches in the zone, but this season that number is down nearly six percentage points, and is below league average. The deflated zone rate clearly has affected his numbers. Price’s walk rate has doubled nearly, and his 7.8 k/9 rate would be his lowest since 2013.

Pitchers coming off arm injuries often have difficulty repeating their mechanics, or trusting their bodies to perform as they’re accustomed. It looks like this could be something Price is battling as well. 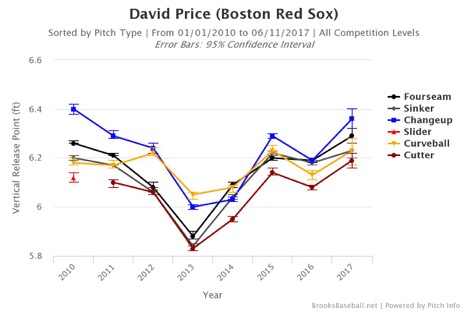 Price’s vertical release point has varied at different points in his career, but his most successful years have typically stemmed from tighter release points for his arsenal of pitches. It would appear as though he is having some trouble consistently releasing all of his pitches. The wide range of release points closely resembles his 2013 spread, probably not coincidentally the most recent season he struggled to strike batters out. Whether this adjustment is an attempt to deal with the injury, or just random variation, remains to be seen, but it’s an issue that likely needs to be worked out for Price to continue his success.

Again, it’s early. It’s obviously dangerous to draw too many conclusions from such small samples, but there also are details to like about Price’s foray into 2017. Despite low strikeout numbers, he still has maintained an 11.2 percent swinging strike rate, a number comfortably above league average. And while Price is walking more batters than normal, his 1.18 WHIP is solid, buoyed by a .241 TAv against.

While there are some warning signs, I’m still betting on track record. After getting lit up by the Yankees on national television, now might be the time to test the nerves of Price’s owner in your league. He might not get back to being one of the eight best pitchers in the league, and you might need to live with growing pains as he gets completely stretched out, but if you can secure the southpaw without giving up the farm, I’d swoop in. It just depends on the…price (yep, that’s how we’re ending this one).