Zack Greinke, Arizona Diamondbacks
Greinke’s first year in the desert likely didn’t go as well as he hoped it would. It definitely didn’t go as well as the Diamondbacks hoped it would. The $200 million man struggled with both injuries and poor performance in 2016, leading to a 4.37 ERA (highest since 2005) and a 1.27 WHIP (highest since 2008). His fastball velocity ticked down, and the strikeouts followed suit, as he fanned only 134 batters in 158 2/3 innings.

By coming to Arizona, Greinke traded a home park that is very pitcher friendly for a home park that is very unfriendly to those on the bump (well it wasn’t a one-for-one, he took the bad park and tons of money). Hitters barreled Greinke’s offerings in 5.1 percent of plate appearances, a number comfortably above league average. They made contact on 90.1 percent of his pitches in the zone, also well above average. It seems as though Greinke is still in the lab concocting a pitch mix that will be effective for pitching in Chase Field. He certainly didn’t find it last season.

In the short term, last season’s 3.17 DRA and 89 cFIP would indicate that a rebound could very well be in order. By all accounts Greinke is a very cerebral guy, which, paired with the talent that he has already shown, could make for a good recipe to bounce back. Such a season wouldn’t surprise me at all. That said, his stuff seems diminished, and if he can’t figure out a way to compensate, it’s not a profile I would like to hitch my wagon to long term. –Mark Barry

Steven Wright, Red Sox
With David Price going to get the dreaded "second opinion" on his arm (sobs into beer), you might want to talk yourself into Wright as a buy-low guy. After all, the man was an All-Star last season, and even with his down performance after the break and base-running injury, Wright finished as the 41st best fantasy starter last year, per ESPN's player rater. Not so fast, my friends. Not so fast.

It's true that Wright will be a better bet to log starts if Price misses time, but there's not a lot that suggests his 2016 hot streak is sustainable. While DRA admittedly loves Wright (3.12 DRA to 3.33 ERA), FIP (3.77) tells a different story. Wright struck out more batters than he normally does last season, so that's good, but his batted ball profile saw a sharp decline in HR/FB at the expense of a higher LD%. There's nothing in Wright's repertoire that suggests he can now suddenly limit homers, so expect that number to regress to his career level. Plus, have we mentioned this guy is coming off a shoulder injury?

I admit that Wright comes with a bit more upside than I'm letting on to — he did have a 2.17 ERA through June last season — but there are so, so many red flags. If you want to gamble on him for 2017 if Price is hurt I sort of get it, but please don't consider him a valuable long-term buy. The odds that he'll find himself back in the bullpen by mid-summer are still pretty strong. –Ben Carsley

After three consecutive seasons of incremental statistical deterioration, it’s become increasingly obvious that the halcyon days of King Felix, highlighted by an unhittable mid-90’s fastball/changeup combo, microscopic Deserved Run Averages and late-season Cy Young buzz, are firmly in the rearview mirror. At 30-years-old, the fastball/changeup combination remains his bread-and-butter, but a sharp decline in fastball velocity has (at least temporarily) sapped his overall effectiveness. To properly illustrate this point, let’s dive into the raw data for a brief moment. 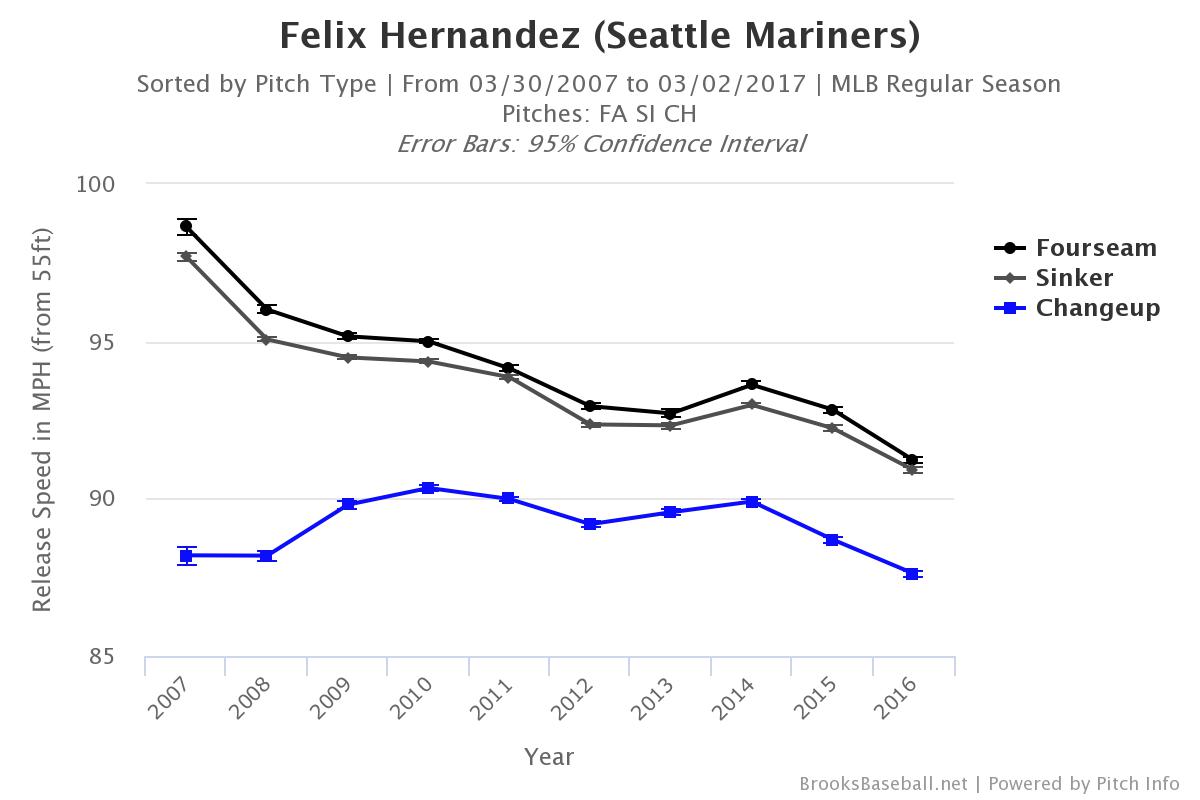 According to BP’s PITCHf/x leaderboards, Hernandez four-seam fastball (91.15 mph) ranked 158th out of 195 starting pitchers and generated the 18th-worst whiffs-per-swing rate of that group last season. Meanwhile, his sinker averaged only 90.88 mph (the lowest velocity of his career) but still managed to generate a decent number of swings and misses. Those variables related to Hernandez fastball are important. However, it’s the diminishing gap in velocity between his fastball and his changeup, which has negatively impacted his performance more than anything else over the last two years. Why does this matter? As BP’s Harry Pavlidis wrote back in 2013, “A fastball with plus velocity and a sizable gap (10+ MPH) between the heater and the changeup make for more missed bats with the offs-/peed pitch, while a smaller gap helps the pitcher to induce more ground balls. Everyone needs tilt and/or sink, but guys who throw hard and can get separation on their fastball/changeup combo can try to miss bats. Those who don't have that gap and/or plus velocity are generally better suited to pitching to contact.”

If you don’t believe me (or Harry), I’ll refer you to the compelling data. Per BP’s PITCHf/x leaderboard data, here is a quick glance at how Felix’s changeup stacks up against every other major-league starter in terms of velocity, whiffs-per-swing, and True Average (TAv) since 2012.

It’s no coincidence that Hernandez changeup started generating fewer swinging strikes and became less effective as the velocity gap narrowed over the last two seasons. Just to be clear, I don’t think Hernandez is toast. He’s still going to be an effective mid-rotation fantasy starter for the foreseeable future. If he can learn to effectively pitch to contact, and the Mariners offseason acquisitions (which placed an emphasis on making wholesale defensive improvement) pay off, he could experience a late-career renaissance. Still, the odds of King Felix regaining his elite status are almost non-existent. –George Bissell

Matt Harvey, New York Mets
One of the first questions I got when I ranked my top 40 starting pitchers for the next three years was “where’s Matt Harvey?” Truthfully, I didn’t even consider him for the top 40, instead ranking him 69th in the follow-up piece. I’m about as risk-tolerant as it gets, but I focus my opportunism on upside plays or post-hype options the market has moved away from too quickly. One class of players I’m happy to pass on is injury risks. Occasionally there’s value to be had when the market is overly spooked by heath questions; often times the discount isn’t adequate, especially for higher profile players.

The 28-year-old Harvey hasn’t thrown more than 308 combined innings in any two consecutive professional seasons and is fresh off of surgery to relieve thoracic outlet syndrome. Josh Beckett had a similar procedure and came back to throw a no hitter and approach a league-average DRA, though he retired (for unrelated reasons) just one season after the surgery. Jaime Garcia had the same operation in 2014 and has had two successful campaigns since, with his stuff fully in tact. That sample size of two gives us short short-term hope but doesn’t do much to elucidate the long view. You can look back to early-2000s Kenny Rogers, who ate innings over a string of adequate post-surgery seasons, but he hardly had Harvey’s power profile.

Add up Harvey’s impressive but limited track record for someone his age, his 2013 Tommy John surgery and the 216 innings he logged in his return, many of which were high stress, his underwhelming 2016 performance, and the uncertainty around the long-term affects of his most recent ailment and you have a player with too many layers of risk to be worth a mid-round investment in long-term formats. —Greg Wellemeyer

Andrew Cashner, Texas Rangers
At 29, Andrew Cashner isn’t old, but nothing seems to be pointing in the right direction for him. He was highly regarded as a prospect, a hard thrower who racked up strikeouts by the bushel. The 6-foot-6 righty stopped bouncing between the rotation and the bullpen and became a full-time starter in 2013. Here’s how things have gone for him since then:

His fastball velocity is decreasing, his strikeout rate is not keeping pace with the league-wide increase in strikeouts, he’s walking more batters and he’s allowing more home runs. His FIP and DRA strongly suggest that it’s not just bad luck making his rate stats head the wrong way, either. His 2017 contract with the Rangers is only a one-year deal, meaning that he’ll be free to sign with a team that calls a more pitcher-friendly park home for 2018 and beyond. That said, moving from hitter-unfriendly home parks in San Diego and Miami in the DH-free National League to Texas in the American League isn’t going to help his surface stats in the short term or his outlook in the long term. —Scooter Hotz

You need to be logged in to comment. Login or Subscribe
JasonPennini
Been avoiding Andrew Cashner for eons! ;)
Reply to JasonPennini
TeamPineTar
So glad to know that Garcia's pitches are "fully in tact." Pitches without good manners have no chance of becoming deboner...er...debonair.
Reply to TeamPineTar
Robotey
ok - but what about short term- what numbers do you expect out of Harvey and Greinke in 2017? A semblance of return to form? Will there seasons be closer to those of 2016 or 2015?
Reply to Robotey
markusbaa
His 2015 was so crazy good that I don't think it will be replicable moving forward. He could definitely be better than his 2016 numbers, but I think that's more of the ballpark that we're living in now: maybe mid 3.00's ERA, 1.2ish WHIP.
Reply to markusbaa