Rebuilding teams are too often overlooked in fantasy leagues. Their competitive situation brings about inherent obstacles—such as low win totals for starting pitchers or lower-than-expected RBI totals—but their ineptitude also affords them the freedom to experiment with fringe players in hopes of uncovering an unexpected contributor for the following campaign.

The Milwaukee Brewers traded then-27-year-old Jason Rogers to the Pittsburgh Pirates in return for outfield prospect Keon Broxton and former second-rounder Trey Supak. Broxton hit a combined .273/.357/.438 with 10 homers and 39 stolen bases in 2015 between Double-A Altoona and Triple-A Indianapolis, and some scouts came away with some surprisingly loud scouting reports. He was a guy with tantalizing power/speed capabilities. The ever present swing-and-miss in his game, though, always threatened to negate the usability of either of those tools.

That came to fruition in Milwaukee. With sporadic playing time during a handful of call-ups in April, May, and June, Broxton had a sub-.200 batting average and a strikeout rate over 40 percent. Even with competent defense in center field and a walk rate in the double digits, that just wasn’t workable—even for a club that didn’t plan to compete in 2016.

The problem, though, was that the 6-foot-3 outfielder didn’t benefit from “further seasoning” in Triple-A. He hit .287/.362/.562 with eight homers in less than 200 plate appearances. Surely, the altitude in Colorado Springs helped the overall numbers, but five of those homers came away from home at more power-neutral ballparks like Omaha and New Orleans.

After the All-Star Break, the Brewers decided to commit to Broxton in center field. It helped that Ramon Flores and Kirk Nieuwenhuis were struggling to stay above the Mendoza Line, but the club’s admission that they were planning to sell quality pieces at the trade deadline and that they were engaged in a long-term rebuilding project allowed them to determine what they truly have in Keon Broxton.

The 26-year-old center fielder has lit up opposing pitchers since assuming the everyday role on July 26. He was hitting .358/.469/.597 in the second half before he launched another pair of home runs on Sunday against the Seattle Mariners. He’s been a top-10 fantasy outfielder in the past 30 days and is seemingly making a rather convincing case for regular playing time in 2017.

Of course, the big elephant in the room is that his banner second half has been buoyed by a .512 BABIP, which is simply unsustainable in every way imaginable. I know it’s unnecessary to elaborate on why Broxton won’t maintain a BABIP north of .500 going forward; however, it’s worth noting that the highest BABIP in a single season since The Strike (min. 300 PA) jointly belongs to Matt Kemp (2007) and Chris Colabello (2015) at a lofty .411. Thus, Broxton is sitting over 100 points higher than the best BABIP in the past 20-plus years.

The former third-round pick by the Arizona Diamondbacks has also posted a 30 percent strikeout rate in the second half, so despite the gaudy numbers, the red flags that existed before still lurk in the shadows.

That’s not to say that Broxton’s second-half performance has been a complete fluke. He’s been tearing the cover off the baseball. Since the All-Star break, no major-league hitter has a higher average exit velocity on balls put in play (according to Baseball Savant). His 34.9 percent line-drive rate in the second half also is rather decent. Broxton is a tall, athletic dude with long levers that allow him to generate big raw power. It’s the potential that he flashed a year ago, the potential that inspired the Brewers to trade a controllable bat away inside the division.

Not all strikeout-prone hitters are created equally, though. One would think that Broxton gets exploited by breaking balls at the major-league level. That’d be false. That’s where the young man has done the vast majority of his damage with the Brewers.

The above numbers isolate his second-half performance (sans Sunday), yet clearly show that Broxton has crushed everything but four-seam fastballs. That would lead one to believe that he struggles with quality velocity. Of course, he’s also hitting .636 against sinkers in the second half and has a .500 batting average against cutters—yes, I recognize the small sample, but the point still stands—so it doesn’t seem so simple to suggest that Broxton can’t handle velocity.

What does seem true, however, is that the Brewers’ center fielder has an exploitable hole in his swing. Check out his whiff percentage during his torrid second half: 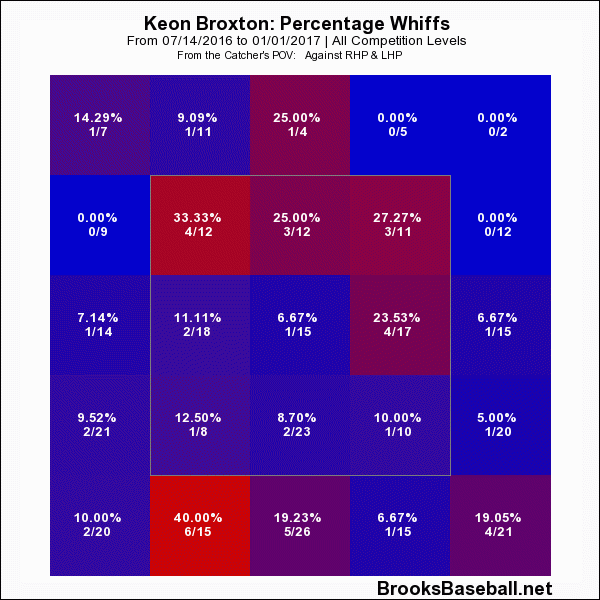 Broxton struggles against four-seam fastballs because he really struggles against pitches up in the strike zone. He whiffs at pitches in the dirt, of course, but that’s hardly notable. What jumps off the page is that Broxton’s swing isn’t tailored to do any damage whatsoever up in the zone. 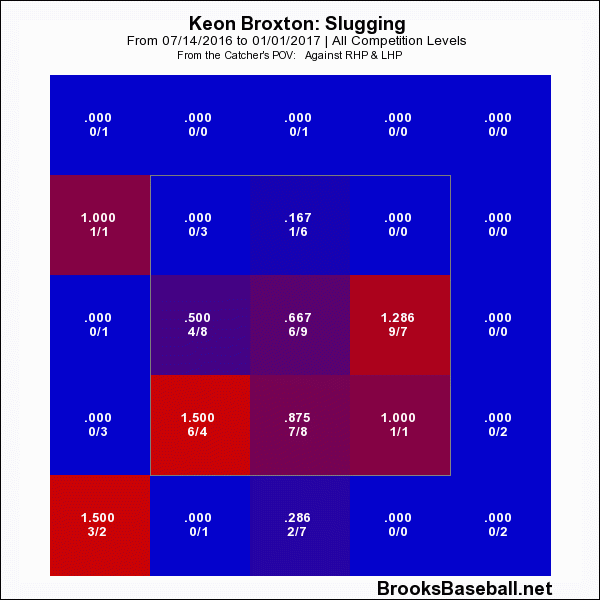 It’s not just the fact that he swings and misses up in the zone, either. The above zone profile illustrates that Broxton’s slugging percentage in the upper third of the strike zone is also nonexistent. Any opposing pitcher should confidently focus on the fastball up in the zone and make Broxton prove that he can handle it. He hasn’t thus far, but he’s demolished everything else.

I get skittish about second-half pop-up guys in fantasy who have obvious holes in their game, and I didn’t even mention the massive platoon split (.904 OPS vs. LHP; .644 OPS vs. RHP). Once the league has an offseason to break down Broxton’s tendencies and zone profile, it seems unlikely that he’ll be able to paper over his weakness in the upper third.

For now, though, I’d understand hopping on the red-hot bandwagon for the final month of the fantasy season. He’s legitimately hitting the baseball hard and is available in over 80 percent of ESPN leagues at the moment. Even if the batting average drops a bit, he’s still a guy who has swiped 17 bags in under 200 plate appearances, and manager Craig Counsell has unleashed his Brewers on the base paths this year. That’s a reasonable safety net for fantasy owners who are worried about a decrease in power or the regression due on his batting average—after all, his 15.4 percent walk rate will still get him on base to run.

This is more of a short-term buy for the remainder of the 2016 fantasy season. For those in dynasty leagues who are keen on buying Broxton for the 2017 campaign, it would be wise to pump the breaks. Not only should owners be worried about the holes in his swing and/or strike-zone coverage, but the Milwaukee Brewers also have Lewis Brinson and Brett Phillips charging towards the big leagues. It’s not clear that he’ll have a long leash if his early-season production is sluggish, assuming he even starts in center field for the Brew Crew on Opening Day next spring.

If roster space allows and Broxton remains on the waiver wire, it’s an obvious “buy” situation for owners. Any other situation—whether it be a trade or a waiver-wire acquisition that requires dropping a legitimate asset—gets sticky really quickly. Avoid medium-to-large investments in Broxton. Power/speed players are tempting, but be smart and recognize when it’s more intelligent to allow other squads to invest… even if it hurts in the end. As always, never make a move just because you’re afraid of looking stupid for passing on a player. That’s no way to go through life.

You need to be logged in to comment. Login or Subscribe
TeamPineTar
Would that be "pump the brakes," as in pump the brake pedal in a car to slow down? Or did you really intend to say something like "exploit these breaks right now while you can"?
Reply to TeamPineTar
jimmyb1799
It's always best to assume that I'm a moron. (brakes)
Reply to jimmyb1799
kddean
As pointed out somewhere on the internet, can't remember where, sorry, Broxton made a mechanical change to his swing when he was sent down. He used to set up with his hands behind his ear, but since coming back up, he sets up with them near his waist.

So to say that going down to AAA didn't result in "further seasoning" is slightly disingenuous.
Reply to kddean
jimmyb1799
There are a couple of things about this mechanical change, which did happen: (1) the idea that it only could've happened in Triple-A is a pretty large stretch; and (2) the heat maps showing a massive gap in his plate coverage and/or swing are isolated to only show after the mechanical change.
Reply to jimmyb1799
kddean
Except Broxton did say that he made the mechanical change while in AAA.

http://www.jsonline.com/story/sports/mlb/brewers/2016/08/07/notes-small-change-benefits-broxton/88353208/
Reply to kddean
jimmyb1799
I know he did. I'm saying it's weird to suggest that he couldn't have made the same adjustment in the majors. It's a mechanical change for someone who had shown success against Triple-A pitching, not "further seasoning" as he matured as a baseball player, as you're suggesting.
Reply to jimmyb1799