It’s impossible to watch enough baseball to be intimately familiar with all major-league hitters or major-league pitchers. Most of us have specific teams that we follow or players who we try to watch most nights, but Major League Baseball has umpteen dozen players with whom we’re familiar only through their stat line.

That focus on statistics has caused many baseball fans to type-cast players based upon their statistical profile. In other words, a low walk rate and a high strikeout rate for a hitter indicates that he has poor plate discipline. A pitcher with a low walk rate has good control, while someone who walks a lot has great patience.

All of those generalizations are shortcuts. They’re largely harmless and often correct, in the broadest sense, but I believe it also masks a recent focus for major-league hitters: being okay with the swing-and-miss. Guys are striking out more because it’s better to swing at good strikes, rather than just strikes themselves.

Collectively, the Milwaukee Brewers have swung at 44.4 percent of the pitches they’ve seen this year. That’s over five percent less than a year ago, when their 49.5 percent swing rate led Major League Baseball. The team’s newly-discovered “patience” has resulted in more called third strikes; however, manager Craig Counsell explains the logic behind consciously laying off pitches that are strikes:

"I agree it's happening — called third strikes and strikeouts in general," Counsell said. "It's reflective of velocity. Do you get hits if the pitcher throws a pitch at the outer edge of the strike zone? Should you swing at it with two strikes or should you take it? Can you get a hit if you swing at it?

"The ideal result for a hitter is a foul ball. But there's maybe five hitters in the game that can intentionally hit foul balls. It's a small number. Contact ability is a skill. Because velocity is going up, it's becoming rare.”

In other words, it only makes sense to swing if you can drive the ball. Contact for the sake of contact doesn’t do much.

The Washington Nationals are the only National League team to have a lower team swing rate than the Brewers. Daniel Murphy has seen his swing rate in the zone decline to 63.6 percent, which is a career low (not counting his very brief cup of coffee in 2008).

Murphy has established a reputation as one of the premier hitters in the majors. Prior to his end-of-season power surge, he’d never hit more than 13 homers in a single season and was more well known for his low strikeout totals. Suddenly, he’s transformed into one of the best offensive producers in the league, hitting .350/.390/.615 with 21 homers and a .264 ISO. This is the first time in his professional career that he’s had an ISO over .200… and he has cleared it by a mile.

According to Murphy, his increased power production since his magical postseason performance in 2015 has stemmed from a recognition that it’s not always beneficial to swing at strikes.

“I think early in my career, just putting the barrel on the ball was something I really strived to do,” Murphy said. “Now as I’ve grown and matured and talked to hitting coaches …I’ve realized that just putting the ball in play isn’t necessarily a victory.”

“So how can we do damage? Well, if we get a good pitch to hit, in the zone I’m looking at, get my “A” swing off, then we can do damage. That’s what I’m looking to do,” Murphy said. “Swinging and missing isn’t always a bad thing.”

This focus on driving the baseball and only swinging at good strikes is likely one of the main reasons why his ground-ball rate has fallen to a career low. His 35.2 percent ground-ball rate is the first time in his career that it has dropped below 40 percent. Logically, that leads to more fly balls, more chances for extra-base hits, and more chances for home runs. Some have suggested that his 13.5 percent HR/FB is unsustainable because it’s a career high by a significant margin; however, the league average HR/FB is 12.8 percent. Murphy’s HR/FB ranks 80th in Major League Baseball (among qualified hitters), so it seems to be a massive stretch to consider it fluky.

It’s not hard for me to buy the increased homers. I don’t think he’ll hit 30-plus on an average basis, but the idea that Daniel Murphy can hit 20-plus home runs over the next couple of years isn’t hard to fathom. He’s a quality hitter. The idea that he can sustain a .300-plus batting average, though, is unlikely and fantasy owners should be prepared for some heavy regression on that front.

Maybe his spray chart looks different and that can explain the greater success? Nah. Look at 2015 (when he hit .200 on grounders) compared to 2016: 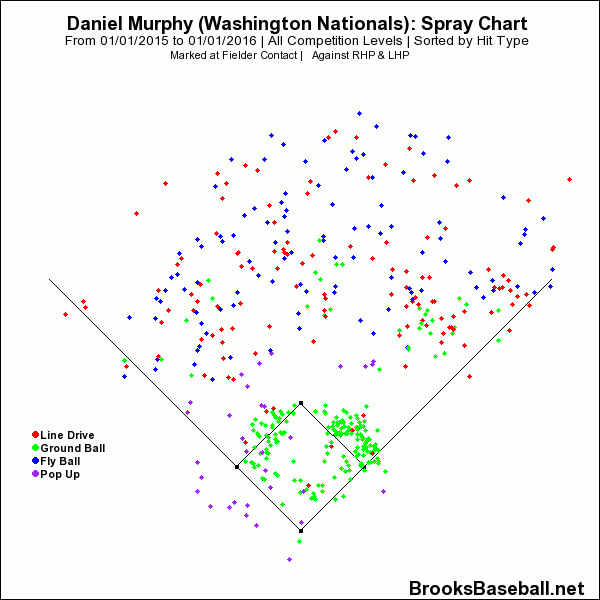 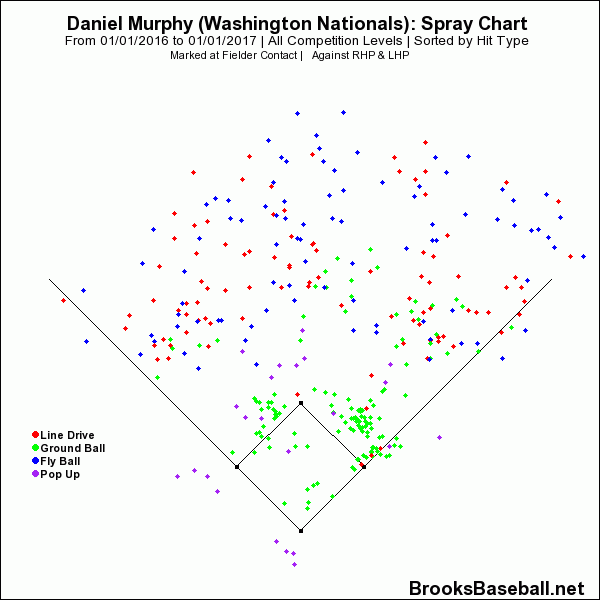 So, yes, the batting average doesn’t appear to be sustainable for Daniel Murphy. I’m not sure he has enough time to do enough damage to drop it under .300 before the end of the year, but fantasy owners should expect heavy regression on that front. The good news is that his power surge seems to have some psychological underpinnings that make it more believable. I haven’t watched enough of Murphy this year to know whether he has noticeable mechanical changes that undergird the power surge, but we often have to make the best decisions we can based off statistical argument.

And, for me, I’m buying the increased power from Murphy. What I’m not buying, however, is that he’s suddenly a .300-plus hitter. Fortunately, with increased power, he doesn’t have to be to be a very good fantasy second baseman.

I’m not convinced that Murphy is a guy fantasy owners will be able to “buy” on the cheap. He will cost an arm and a leg on the trade market, so the question is whether he’s worth that price for the stretch run. Considering the presumed batting-average regression, I’m not sure that he is. At the same time, I believe that his power numbers will remain good enough to justify not selling.

It’s the perfect holding scenario. He should remain valuable, but the warning signs are present that suggest upcoming regression in certain areas. If you’re someone who wants to buy a premium piece, there are better ones to target for the championship run.

You need to be logged in to comment. Login or Subscribe
MikePemulis
What's his AEV on grounders? That would be a good leading indicator on how much we can expect his BA on grounders to regress would it not? Especially if we're buying that he's putting better wood on the ball by being more selective.
Reply to MikePemulis