This week is not exactly a banner one in terms of depth for 12-team and 15-team mixed free agent hitters, so hopefully you followed our recommendations over the last couple weeks and picked up Odubel Herrera (still unowned in 32 percent of ESPN leagues), Chris Carter (unowned in 25 percent of ESPN leagues), Brandon Drury (unowned in 36 percent) and Nick Castellanos (unowned in 20 percent). If any of those guys are still available, please run to grab any of them as well as the 12-team mixed hitters we’ll look at this week.

After a maddening season in 2015 that saw him demoted to the minors, it looks as though Ozuna has ingratiated himself to new Marlins skipper Don Mattingly, who has penciled the 25-year-old into the starting lineup for 30 of the team’s first 33 games. Ozuna has rewarded Mattingly with a .295 AVG, which would be a nice bump from his .267 career mark, and has already hit six home runs in 2016 after hitting 10 in 123 games last season. Ozuna is showing the same type of pop that he did in his age-23 season of 2014, where he hit 23 home runs in 153 games and logged a .186 isolated power mark. Ozuna’s .213 ISO in 131 plate appearances this season is certainly an encouraging sign that he can return to his 2014 form, and he’s hitting for a higher line-drive rate (18.7 percent this season, 17.5 percent in 2014) and a lower ground-ball rate (48.6 percent in 2014, 42.9 percent this season) to this point in the season while his HR:FB rates are very similar (16.8 percent in 2014, 17.1 in 2016) as well. I don’t think Ozuna will keep up his nearly-.300 AVG, but the power has always been part of his profile and he looks like a good bet to meet or surpass his productive 2014 campaign.

Villar has been running wild as a Brewer, stealing 11 bases (which leads the National League) in his first 32 games. Villar has also sported a nifty .361 OBP in 135 plate appearances and has hit first or second in the Brewers order in 20 of his 31 starts, and like most Brewer hitters to this point in the year, the former Astro is showing an improved walk rate (12 percent) above his career mark (nine percent). Villar’s production has landed him inside of the top 10 among shortstops on ESPN’s Player Rater at this point, ahead of Carlos Correa, Francisco Lindor and Eugenio Suarez—further signifying just how much of an impact he is making with his wheels. Villar stole over 40 bases in each of the last two years between Triple-A and the majors, and he’s well on his way to topping the 40-steal mark again this year. —J.J. Jansons

Featured in this space for the second consecutive week, Pomeranz fired six shutout innings, allowing just a trio of hits and walks while racking up 10 strikeouts, in a win over the Chicago Cubs on Wednesday night. Through seven starts, the 27-year-old southpaw owns a sparkling 1.80 ERA and 1.07 WHIP with 51 strikeouts (11.5 K/9) and 19 walks (4.3 BB/9) over 40 innings this season. Yet, he’s still available in nearly half of ESPN.com leagues and over 36 percent of Yahoo formats. He’s only out there in 18 percent of CBS free agent pools, so if you’ve waited this long in a shallow mixed, it’s likely too late.

While Pomeranz’ performance to open up the 2016 campaign has been utterly sublime, there are some omnipresent durability and workload concerns. He’s failed to eclipse even 120 total innings in a single season dating back all the way to 2012. Last year, he was utilized primarily out of the Oakland bullpen, where he made 44 relief appearances and just nine starts, logging a grand total of 86 innings. It’s highly unlikely that Pomeranz will threaten for 200 innings, meaning that there’s an expiration date looming later this summer in San Diego. In the meantime, fantasy owners should enjoy the plentiful harvest of strikeouts and quality starts for as long as possible in re-draft formats.

A shining beacon of mediocrity for the vast majority of his major-league career prior to his arrival in Pittsburgh via trade last August, Happ closed out the 2015 campaign with a magnificent 11-start stretch, posting a 1.85 ERA with 69 strikeouts and just 13 walks over his final 61 1/3 innings. The general fantasy industry consensus after Happ signed with Toronto as a free agent this offseason was that he wouldn’t be able to come remotely close to replicating those numbers north of the border for a variety of reasons. Yet he’s now made seven starts and owns a 2.05 ERA this season.

The 33-year-old lefty has benefitted from a preposterously high and clearly unsustainable 90 percent strand rate. However, he’s surrendered just four home runs and has been able to maintain the pinpoint command (2.4 BB/9) he displayed late last season. The strikeouts are down noticeably, but considering that Happ wasn’t a highly sought after commodity on draft day and he’s still out there in plenty of leagues, they’re merely gravy on top if he continues to pitch this well. He should continue to roll with a matchup at home against a weak Rays lineup next week. —George Bissell

Five players this season have at least 5 HR & 5 SB. Harper, Altuve, Betts and Correa are the first four. Anyone want to guess the fifth?

Since our fearless fantasy leader pointed this out Wednesday on Twitter, emerging fantasy monster Rougned Odor has joined this group, but the sixth member in terms of fame and certainly in terms of fantasy ownership is the former Ranger, Leonys Martin. The 28-year-old Martin is the 34th-ranked outfielder on ESPN’s Player Rater, and that’s with a less-than-ideal batting average of .204 and an on-base percentage of .275 in his first 122 plate appearances as a Mariner. Those numbers should creep up a bit as Martin is the owner of a .262 BABIP to this point, well below his .310 career mark. I think it’s highly unlikely that Martin is now a 20-plus home-run hitter, but he’s capable of reaching double-digits this season if he continues to see regular playing time, and his defense in center field should give him every opportunity to do so. Martin’s seven stolen bases place him in a tie for fifth in the early going, and after stealing 30 or more bases in each of his last two full-seasons as a Ranger, he should be able to match that production in Seattle, which gives him a strong chance to finish inside the top 25-30 among outfielders by season’s end, even if the power doesn’t continue. —J.J. Jansons 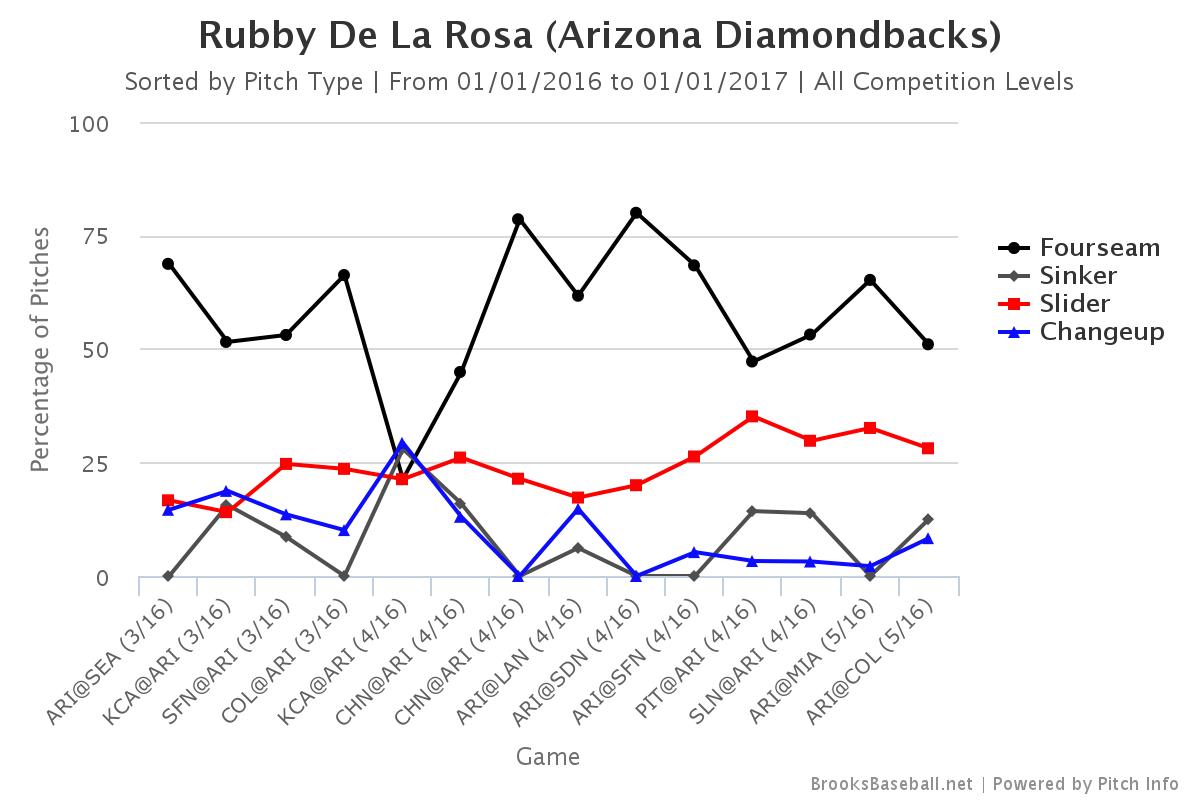 Over his last five appearances (four starts) De La Rosa owns a 4-1 record, with a 2.00 ERA and an impressive 29-to-7 strikeout-to-walk ratio over 27 innings. The 27-year-old right-hander’s uptick in performance coincides with a renewed emphasis on his slider, which is generating a formidable 43 percent whiff-per-swing rate. Not only has his command (2.7 BB/9) improved, but he’s also posted the highest strikeout (9.3 K/9) and ground ball (56 percent) rates of his career.

There are still some issues De La Rosa needs to address, most notably his struggles against left-handed hitters, who have crushed him to the tune of an .855 OPS over the course of his career. He’s at least found a way to limit the carnage (.611 OPS) so far this season, but it remains to be seen if he can keep that going. The lack of a quality third pitch is also a major problem. Regardless, it’s impossible to overlook the progress De La Rosa has made during his second season in Arizona so far. It’s been an encouraging month, and fantasy owners in deeper formats should at least start paying attention moving forward.

Trevor May, RP, Minnesota Twins (Available in 95% of ESPN.com leagues)

The 26-year-old was a pedestrian starter (4.43 ERA) who transformed into a dominant reliever overnight last year, posting a 2.87 ERA with 37 strikeouts and just eight walks over 32 appearances once he was out of the rotation. The Twins wisely decided to keep him in the bullpen on a more permanent basis to begin this season, and the results have been stellar so far out of the gate. Through 17 appearances, May owns a 1.89 ERA and 1.11 WHIP to go along with 27 strikeouts in 19 innings of work this season. May’s 71 cFIP grades out as the 10th-best out of every major-league reliever this season. In deeper mixed leagues, he’s an excellent way to shore up your pitching staff’s ratios while also providing a healthy dose of strikeouts. Given the massive struggles of interim closer Kevin Jepsen (5.40 ERA) and injuries that have plagued Glen Perkins over the past two seasons, there’s a chance May could be closing in Minnesota sooner rather than later. —George Bissell

With entrenched starter Mike Moustakas shelved with an injured thumb for the next few weeks, the 23-year-old will have an opportunity to make an impression in Kansas City. Through five games, he’s hitting .286 with a home run, a pair of runs scored and three RBI. He’s only a temporary stopgap option, but we know he can hit. Prior to his call-up, the Nicaragua native was hitting .333/.402/.624 with seven home runs in Triple-A. —George Bissell

Beckham, who was activated from the disabled list on Tuesday, looks to be the main beneficiary of Atlanta dispatching its Opening Day second baseman (Jace Peterson) and third baseman (Adonis Garcia) to the minors. Beckham has started each of the Braves three games at third base since his activation, and his main competition for playing time at the hot corner appears to be a combination of Reid Brignac, Chase d’Arnaud and Daniel Castro. Yes, that’s how bad things are these days in the Atlanta infield aside from Freddie Freeman. Beckham had three RBI in Wednesday night’s loss to the Phillies, and with Ender Inciarte’s return to the lineup, the Atlanta offense shouldn’t be quite as bad as it has been in the early going. —J.J. Jansons