The Los Angeles Dodgers selected Nathan Eovaldi in the 11th round of the 2009 draft, paying him $250k to forgo his scholarship to Texas A&M. He received a couple cups of coffee in the big leagues before being shipped to Miami in the Hanley Ramirez trade. Eovaldi was the cornerstone of the deal for the Marlins; however, the real story of that move was the drastically declined value of Hanley.

Eovaldi routinely touched the high-90s with his fastball and posted a 3.39 ERA as a 23-year-old starter in 2013. He won only four games that season, but his promising 18-start campaign made some believe he could blossom into a true number-three starter, maybe more if you had a penchant for dreaming on pure arm strength.

He disappointed the following year. Eovaldi compiled a pedestrian 4.37 ERA and allowed a league-leading 223 hits in 199 2/3 innings. Fantasy owners began noticing the extreme limitation of his repertoire and started to wonder if he’d even be able to stick in the rotation.

The New York Yankees brought him to the Bronx in the Martin Prado deal, confident they could coax more utility out of his arm strength. They stuck him in the rotation and were simultaneously disappointed and encouraged.

Eovaldi enjoyed a much more productive second half, one that was reminiscent of his promising 2013 campaign. The right-hander posted a 3.67 ERA over 56 1/3 innings after the All-Star break. Opposing hitters only managed a .239/.317/.312 slash line after clobbering him in the first half of the season, and it seems there’s significant reason to believe Eovaldi’s success could be more sustainable than a simple BABIP regression would otherwise suggest.

The 26-year-old finally committed to a repertoire change that he merely dabbled with in the first half. He leaned on his seldom-used splitter, and it paid dividends.

Eovaldi had never thrown a changeup or splitter more than 10 percent of the time prior to 2015, so the fact that 21 percent of his pitches were splitters in the first half last year is notable in itself. But it wasn’t regular. In his first 14 starts, he only threw it more than 15 times in a start twice. He even abandoned it entirely on April 21 against the Detroit Tigers.

Then, on June 26 against the Houston Astros, it seems that Eovaldi made a conscious decision to rely on his splitter. He threw it 25 times that game, and the number of splitters never dropped below 20 for the remainder of the year. 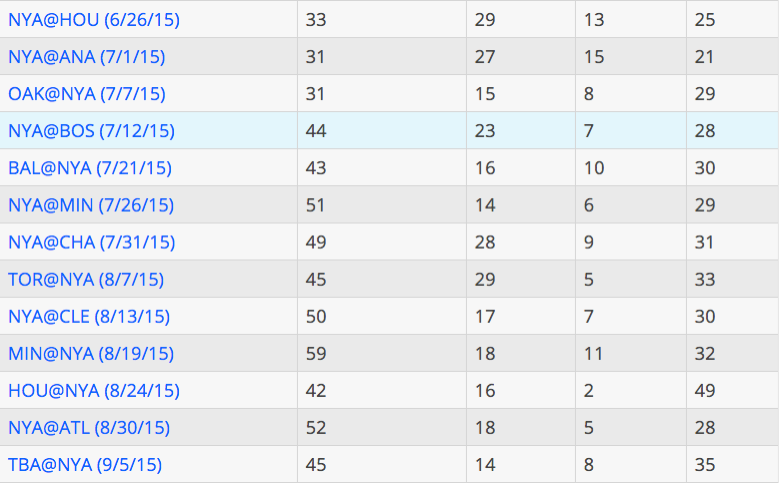 From left to right, the numbers above represent the amount of four-seamers, sliders, curveballs, and splitters. For a pitcher who used to be a two-pitch guy and arguably would’ve been better suited in the bullpen, such a change in repertoire is unbelievable. It was needed, too, as lefties hit .312/.375/.406 against him on the year—the biggest reason he was unable to pitch up to his FIP—but lefties only hit .234 with an .053 ISO against his splitter. As such, it’s not a stretch to assume his improved second half largely came on the back of his increased split usage.

In other words, after seven professional seasons, Nathan Eovaldi finally has the three-pitch arsenal needed to be a starting pitcher in the majors.

As alluded to above, left-handed hitters treated Eovaldi worse than Lady Mary treated Edith in Downton Abbey. The torched him for a .312/.375/.406 slash line. That was the 10th-highest batting average versus lefties amongst major-league starters in 2015. It’s why the right-hander consistently posts BABIPs above .300 and why he has been unable to perform anywhere near his mid- to low-3.00 FIPs.

Long-time Eovaldi owners understand this. In this article, our own Craig Goldstein analyzed Eovaldi’s fastball-slider combination and why lefties have historically found so much success. That certainly proved true early in the year, and those struggles effectively torpedoed his entire season. 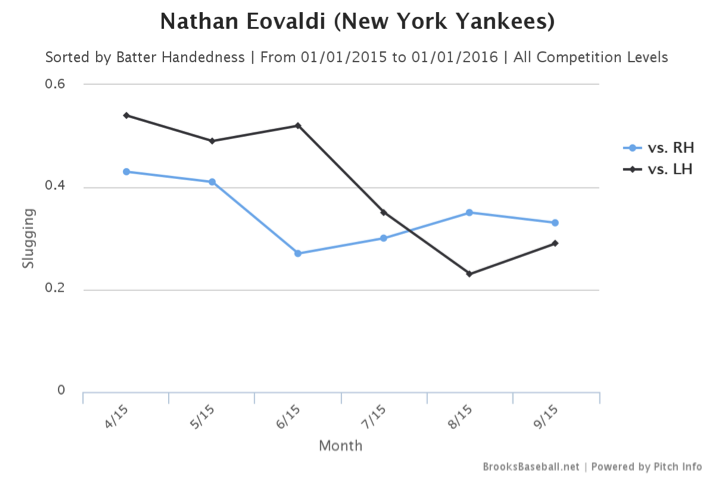 I posited a reason up above why fantasy owners can perhaps expect the former Marlins pitcher to find greater success going forward. The abrupt change in the second half is also illustrated by the above graph. However, his season-long statistics make it abundantly clear that lefties feasted on him and his run-prevention suffered because of it. We can only whitewash his numbers so much. He still posted a 4.20 ERA and only struck out 18 percent of the batters he faced, and much of this was due to his early inability to handle lefties. That’s obviously what went wrong in 2015.

Much of his 2016 performance will depend on his ability to carry over the success of his splitter, if that’s not clear by this point. Baseball Prospectus’ advanced statistics further suggest that Eovaldi is on the cusp of taking a significant step forward in his fantasy production. His 91 cFIP indicates that he’s projected to be nine percent above the league’s average in run prevention. To put that in perspective, that ranks 31st among starters who tossed 100-plus innings in 2015. Higher than Hisashi Iwakuma, Yordano Ventura, and Johnny Cueto. Higher than popular sleepers like Collin McHugh and Taijuan Walker.

It’s dangerous to put too much stock in second-half numbers. They’ve been shown to not be predictive of future performance, as full-season performances are markedly more successful in that realm. However, it seems foolish to ignore the repertoire change in July 2015 and what that means for his profile on the mound. It’s one of those cases in which on-the-field alterations were reflected in the numbers.

Of course, we tried to say the same thing about Shane Greene a year ago, and look what happened. And by “we,” I mean me. I argued that Greene’s new changeup put him in position for a big year. That proved true, too, for about three starts before he became a dumpster fire and was demoted to Triple-A.

What I tried to argue in that Greene piece, though, was that it’s difficult to wait for a sufficient sample size as a fantasy owner. By the time performance has stabilized, the price tag often becomes prohibitive. So it’s imperative that owners take risk on low-cost entities who have shown improvement statistically and have a true “scouting” reason for that uptick in success. It will fail at times. That’s unavoidable. But you also have to play the game to hit the jackpot, and I’m arguing that this is one of the lottery tickets that offers favorable odds at a lucrative return with minimal investment.

If Eovaldi can really take a step forward in 2016, what does that look like for the future? He struck out over 20 percent of the batters he faced in the second half next year and isn’t even 27 years old, so it seems that there’s upward projection in strikeouts without an immediate worry about the over-30 downturn that fantasy owners should eventually expect.

Perhaps it looks a bit like what Jake Odorizzi offered last year: a 3.35 ERA with a 21.4 percent strikeout rate and a 1.15 WHIP. That’s a top-40 starter. He’s currently being drafted outside the top 80 starters, so it seems that Eovaldi could experience a significant jump in value over the next three or four seasons. He’s an attractive buy-low option with a fairly high ceiling. Really, in the late rounds of a fantasy draft, there’s not too much more a fantasy owner can ask for.