An eighth-round pick by the Toronto Blue Jays in 2013, Graveman, like every other college senior drafted that year by the Jays in rounds four through 10, had no leverage in negotiating his signing bonus. The Mississippi State product essentially had no choice but to accept the whopping $5,000 he was offered (the assigned value for the pick was $150,000). He signed after pitching in the College World Series, and the right-hander with a sinker-slider arsenal was sent to the Lansing Lugnuts of the Midwest League, where he made 10 starts with a 4.31 ERA in 39 2/3 innings before season’s end.

Graveman started the next year back in Lansing, but things really picked up for him at High-A Dunedin. During a start in June, his fastball started cutting on its own, and he developed a cutter, giving him a weapon with which to neutralize left-handed batters. He ended up with a 2.23 ERA in 96 2/3 innings over 16 starts before getting the call to Double-A. He only got one start there before a stellar stint in Triple-A, where he had a 1.88 ERA in 38 1/3 innings over six starts. Then the Blue Jays called him up on September 1st when the rosters expanded, completing the righty’s rapid ascent to the majors, but Graveman was only used sparingly that month, making just five relief appearances and no starts.

In the offseason, the Oakland Athletics needed starting pitching after losing Jon Lester to free agency and trading Jeff Samardzija to the White Sox. The A’s acquired Graveman as part of a package of four players in a trade for third baseman Josh Donaldson.

Even before the season, it was clear that the move to Oakland was going to benefit Graveman. Making half of your starts at Toronto’s Rogers Centre isn’t easy for anyone, but it very well could have been a recipe for disaster for a pitcher like Graveman, who doesn’t have power stuff or miss many bats. Oakland, of course, is the perfect ballpark for a finesse pitcher, as it is cavernous and has a lot of foul territory.

While some in the fantasy baseball industry were becoming interested in Graveman as a sleeper in deeper formats because of his pitchability and the move to Oakland, where he’d likely have the opportunity to start in short order, scouts were expressing caution. The lack of strikeouts and plus stuff are valid concerns, but his slight frame also led to questions about how he’d fare turning over major-league lineups for a second and third time. The consensus was that he was a big-league pitcher, but it might have to be in the bullpen. He was hit with the “no. 4 starter” label, and while there are worse things, that’s not particularly appealing.

In spring training, he started opening some eyes. It was just Cactus League ball, of course, but Graveman was dominant, as he allowed just one earned run in 25 1/3 innings over six starts. He also had a 17-to-7 K:BB ratio and his AVG allowed was just .141. With that, Graveman earned a spot in the Opening Day rotation for the Athletics.

He was rocked in his first start for eight runs (seven earned) at home against the Rangers, though we would find out after that he was battling the flu. But he proceeded to struggle for most of April, and with an 8.27 ERA in four starts, he was optioned to the minors. 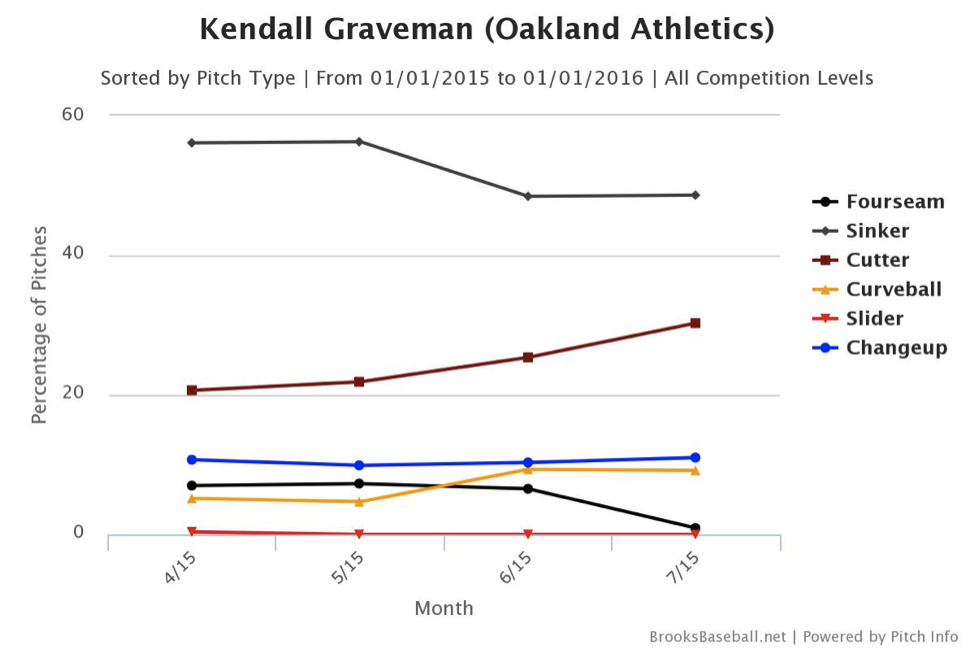 Graveman was recalled toward the end of May after posting a 1.85 ERA in four starts with Triple-A Nashville. While he took his lumps in the majors in April, he’s pitched much better in his second turn. As you can see from the graph from Brooks Baseball above, Graveman has made adjustments to his pitch mix since the beginning of the season. He’s decided to throw more and more cutters in favor of his four-seam fastball, as his percentage of cutters went up to 25 percent in June and is at 30 percent through one July start compared to just 20 percent in April. He’s also throwing his curveball more as well, using it nine percent of the time now compared to five percent in April.

While his changeup usage has remained fairly steady, the pitch wasn’t as effective for Graveman early in the season and has since developed into another weapon for him. As you can see from the graph below, the ground-ball percentage on his changeup has been above 60 percent and risen each month since he returned from the minors, compared to just 40 percent in April. 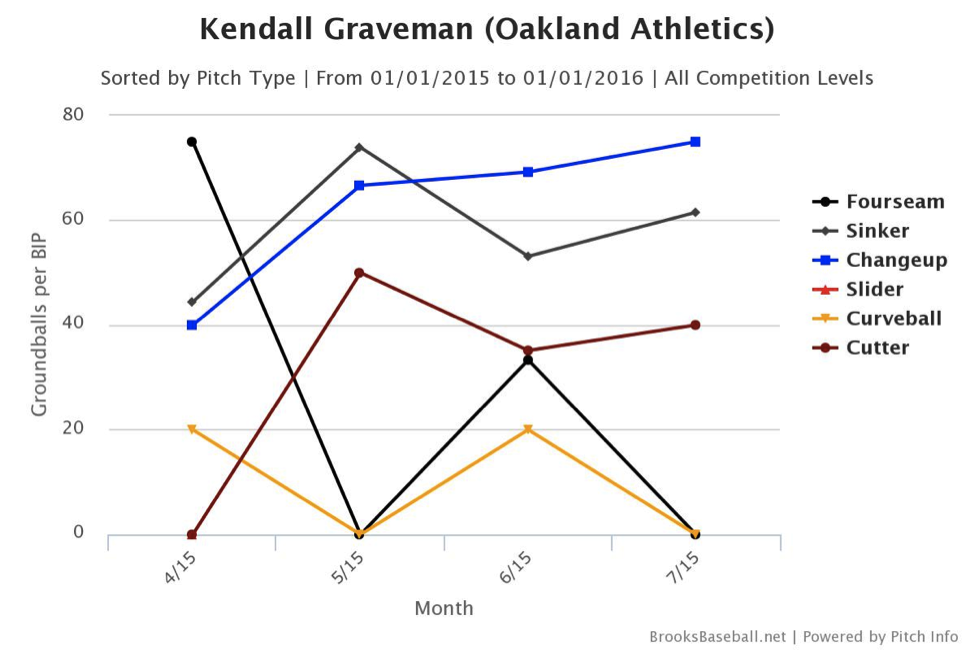 These adjustments seem to have done the trick, as the results have been great for Graveman of late. Since returning from the minors, in nine starts he has a 1.78 ERA, 1.16 WHIP, and 38-to-15 K:BB in 60 2/3 innings. After pitching into the sixth inning in just one of his first four starts, he’s completed at least 5 2/3 innings in each of his last nine starts and finished seven innings in each of his last six starts. In a little over three months, we’ve seen Graveman completely turn his season around.

I’d be remiss not to point out that Graveman has had his share of good fortune during this impressive nine-start streak. Then again, nothing went his way in April when his ERA was above 8.00 and his BABIP was .344, so he was due for some positive regression, he’s enjoyed a .272 BABIP in his last nine starts, lowering his season mark to .289. What’s happened with his strand percentage is similar; it was merely 60 percent in April, and it has been above 88 percent in each month since.

While Graveman is a ground-ball pitcher, he’s not a dominant worm-burner pitcher who is constantly inducing weak contact. He’s been outpitching his FIP, which was 3.77 in May and 3.75 in June, but unfortunately he’s doing so on the wings of factors he can’t really control. Graveman’s strand percentage is now at 81 percent for the season, meaning that now he’s due for that pendulum to swing back the other way to get him down closer to the league average. He’s unlikely to continue to strand baserunners at this pace all season long, and once the floodgates open, his ERA will shoot up even if the rookie is able to pitch to a 3.50 FIP the rest of the way.

A lot of the time, a player’s prospect pedigree can cloud our judgement when it comes to evaluating players. We’re more likely to give a first-round pick more chances to establish themselves than the guy who was picked in the 40th round or signed for $5,000. Graveman doesn’t have that advantage, but he’s already worked his way through the minors quickly and shown that he can be successful in the rotation at the major-league level when he has it all going. The 24-year-old isn’t projectable and he isn’t a trade target in fantasy because it could get ugly if the wheels come off again, but he’s fine to own in deep leagues while he’s hot like this. He’s a major-league pitcher, that much is certain.