Exit velocity is a common topic of discussion this year, with Statcast data becoming part of MLB's Gameday presentation and subsequently available via the indispensable Baseball Savant. Witnessing a Giancarlo Stanton home run in today’s environment means not just watching the physical spectacle of it but being instantly able to quantify how far out of the stadium he hit it and how much faster than Jayson Werth’s preferred driving speed the ball came off his bat. As though Carlos Correa’s .287/.309/.543 line as a 20-year-old isn’t impressive enough, our appreciation is enhanced by knowing that his average batted-ball velocity sits between those of a resurgent Albert Pujols and potential home-run king Todd Frazier.

While batter exit velocities are often cited, including recently on these very pages by George Bissell, pitcher batted-ball velocities are discussed less often. Whereas it’s nice to immediately know that a Bryce Harper upper-decker left his bat at 115 mph, alerts about weakly hit grounders are far less exciting.”@gregwellemeyer: Another 32 mph grounder for Dallas Keuchel!” is the kind of tweet that would somehow result in even fewer followers than I already have.

Another reason is that pitchers are simply less responsible for exit velocity than batters, by a five-to-one ratio, as Rob Arthur recently wrote at Five Thirty Eight. Further, there is less deviation and it’s more difficult to distinguish the best and worst pitchers from average ones. As Rob writes:

"While the best batters increase batted ball velocity by as much as 7-8 mph, the best pitchers suppress it by 1.5 mph compared with the average pitcher. That has real significance: Such a decrease roughly equates to a 13-point decrease in batting average on balls in play (BABIP) for a given batted ball. Over the course of a game, the pitchers who can best decrease exit velocity save about a quarter of a run (on average). A quarter of a run doesn’t sound like much? Multiplied over a season, all those quarters of a run add up to about one win of value."

There are some things that seem intuitively correct about the data at this point in the season. For example, most elite relievers have extremely low average batted-ball velocities. The worst starters by this measure are guys like Chris Tillman, Wandy Rodriguez, Jarred Cosart, and Jason Marquis. And, conversely, names inside the top 10 include Clayton Kershaw, Chris Sale, Francisco Liriano, Dallas Keuchel, and Jake Arrieta. On the other hand, Dillon Gee is also inside the top 10, and he currently pitches for Las Vegas. In case you’re new here, that’s not a major-league team.

There are potential problems: The data suffers from errors and incompleteness, there are cases where it’s hard to reconcile Statcast’s batted-ball velocities with Baseball Info Solutions’ (BIS) soft- and hard-hit rates, the predicitive usefulness of the data has been questioned, and small samples are still a possible issue.

With these caveats noted and thanks given to Baseball Savant for the data, let's get in to a few pitchers whose batted-ball exit velocities might just tell us something about their value going forward. For this analysis I examined pitchers who have a minimum of 100 batted ball observations, a sample that eliminates relievers and includes most starters who have thrown roughly 40 innings.

Young Thor is doing a whole mess of things well in his rookie season, including striking out more than a batter per inning and walking fewer than two per nine innings. He’s also preventing runs reasonably well, having posted a 3.59 ERA through his first nine starts. His fielding independent numbers indicate there’s room for him to get better there, and our metrics agree. Syndergaard’s DRA- of 89 and cFIP of 88 think that he has been and will continue to be an above-average pitcher. One reason why his ratios are bound to improve is the difficulty opponents are having squaring him up. Synderggaard’s average exit velocity is third lowest in baseball, trailing only Kershaw and Sale. He’s been able to induce so much weak contact in part by keeping the ball down. Look at this thing of beauty: 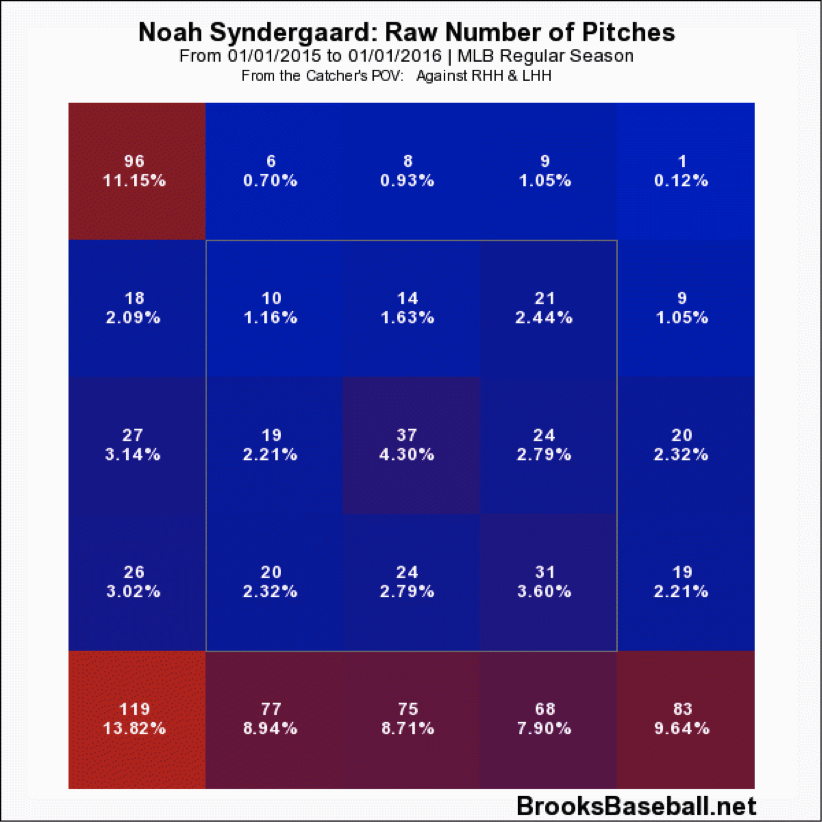 That’s nearly half of all pitches (49.01%) low and out of the strike zone. It’s tough to put good wood on the ball down there, especially since the percentage is even more exaggerated when isolating his breaking (58.76%) and offspeed (79.81%) offerings. The low average exit velocity is also a product of his ability to start hitters off with a strike, something he is doing at a 64.7 percent clip, a top-30 mark among starters who have thrown at least as many innings. Consistently putting batters in counts where they’re forced to be more protective than aggressive is a sure way to weaken contact. Syndergaard won’t come cheap because of his pedigree and solid performance to date, but he is demonstrating one elite skill and most signs point to improvement in his ratios complementing a lofty strikeout total.

McHugh came off the scrap heap to record a 2.73 ERA and 1.02 WHIP with 157 strikeouts in 154 2/3 innings last season. A big factor in his success was a shift away from a below-average fastball and towards a heavy reliance on breaking pitches. In 2014, McHugh threw his deuce 23.29 percent of the time and the slider another 31.49 percent. In 2015, he’s skewed even further towards the slider and his current 37.85 percent usage makes it his most-frequently thrown pitch. I bring all of this up because while McHugh’s overall average exit velocity is one of the 10 lowest marks in the majors, it’s largely a product of throwing so few fastballs relative to his peers. Here are his average exit velocities by pitch type as compared to major league averages:

It’s important to remember that you shouldn’t solely look at an overall average when the difference in exit velocity between pitch types isn’t equal and a pitcher’s mix is a big departure from the norm. You’d expect McHugh’s average batted-ball velocity to be better than league-average because he predominantly throws pitches that are likely to be hit less hard.

With regard to his slider, batters are swinging at it a little less frequently than last year, whiffing at the lowest rate of McHugh’s career, and making okay contact when they do hit it. He’d be well served to turn some of those back in to curveballs, his best pitch this year by almost any measure, including exit velocity. Assuming his arm doesn’t fall off from all the breaking pitches, McHugh’s ERA will come down from its current 4.51 level, but I don’t think he’ll approach last year’s strikeout rate, and he’s likely to pitch at something close to replacement level in 12-team leagues of standard depth.

The underlying numbers suggest that the 2015 iteration of Chen looks essentially the same as 2013-14 versions, with a handful more strikeouts this time around. However, fantasy owners are taking more notice this year because his 2.90 ERA and 1.15 WHIP are both top-25 figures among qualifiers. Chen is having success despite a home run rate of 1.34 per nine innings that is more in line with a cohort of pitchers who have ERAs well north of 4.00. The home runs allowed are particularly strange when you consider that his average exit velocity is 16th-lowest among starters. Like Syndergaard, Chen is keeping the ball down and is benefitting from getting in front of hitters by throwing first-pitch strikes, but the biggest change relative to the rest of his career is a lower vertical release point. The change in Chen’s arm slot has most noticeably affected his fastball, which is garnering both more swings and more whiffs per swing than it ever has. If that is evidence that the delivery changes are creating more deception, a batted-ball velocity on his four-seamer that betters the major-league average by three miles per hour is another piece. The rest of Chen’s arsenal is not only subpar but worsening relative to his own standard, and that makes me skeptical that he can keep the ratios and strikeout rate where they are today. Still, it’s an interesting case to watch.

Ventura can no longer lay claim to the fastest fastball among starters, but the 96.54 average on his four-seamer is still good enough for sixth-highest, and the 96.52 average on his sinker is third-highest. The presence of Noah Syndergaard is one reason for his slip down the leaderboard, but he’s also lost more than a mile per hour on both his fastball and sinker. Additionally, as Ben Lindbergh wrote recently, the perceived velocity on his four-seam fastball is two miles per hour shy of the radar gun reading because of his short stature and consequent inability to get major-league average extension. Ventura desperately needs to rediscover the lost velocity, as batters are absolutely teeing off on his hard stuff.

This is a case where the Statcast and BIS data agrees: His 10.6 percent rate of soft contact would be the lowest number among qualifiers by nearly three percentage points if he had a few more innings. Ventura just turned 24, has a physical gift that can’t be taught, and has made some concrete improvements, like a lowering of his walk rate to a career-best 7.6 percent and an improving whiff rate on his secondaries. Nevertheless, I recommend caution if you’re considering buying low, because unless that velocity comes back, he’ll have trouble meeting the expectations tied to his former top-prospect status and draft-day position.

This one’s impossible to figure. Burnett’s average exit velocity is the highest in the major leagues among qualified starters. He doesn’t throw an abnormal number of hard pitches and I don’t see the kind of change in his usage, velocity, or pitch shape that would indicate hitters are having an easier time making loud contact. BIS data indicates that his soft-/medium-/hard-hit percentages are right in line with career averages. Those averages tend towards harder-than-league-average contact, but not nearly hardest in the league. Groundballs have a 85.74 mile-per-hour average exit velocity, the lowest of the batted-ball types and Burnett is a noted groundballer. It would be an odd skill, but I suppose it’s possible Burnett is extremely good at eliciting hard contact at a negative angle. The Pirates have been below-average defensively at every infield position, so it seems unlikely they’re well equipped to handle a plethora of hard-hit grounders in such a way that allows Burnett to register easy career bests in strand rate and ERA. What I’m trying to say is that I don’t have an explanation here, but the column is called “Five to Watch” and I only had four. Do with Burnett what you will.

You need to be logged in to comment. Login or Subscribe
brianwilliams42
One more angle to assess, fantasy baseball doesn't seem to get easier with data, it gets more challenging.
Reply to brianwilliams42