Once upon a time, back in 2012, Yasiel Puig, after finally escaping Cuba, signed a seven-year, $42 million contract with the Los Angeles Dodgers, then a record deal for a Cuban defector. (Yasmany Tomas, Jose Abreu, and Rusney Castillo have each received greater contracts since Puig’s payday.) The Puig signing wasn’t met with universal acclaim at the time, as some around the game wondered why the Dodgers gave so much money to a player who wasn’t even in shape after sitting out the year before. Still, the Dodgers had seen enough and guaranteed Puig more money than th A’s gave Yoenis Cespedes, who was not only in tremendous shape, but also major-league ready at the time. Despite an impressive spring training showing in 2013, Los Angeles opted to let Puig go to the minors to open the season. Of course, it didn’t take Puig long to make his presence known in the major leagues as he took the league by storm upon arriving in June. As a rookie, Puig posted a .329 TAv in 104 games at the age of 22 and the man legendary broadcaster Vin Scully calls “the wild horse” has never looked back.

In his first season in the majors, Puig did a lot of his damage on hard pitches. He hit .338 with a .427 BABIP against hard pitches in 2013 and as you can see in the Brooks Baseball graph below he saw even more hard pitches the following season. Puig’s BABIP on hard pitches would come down in 2014, though, as he hit .349 on balls in play and his AVG against hard pitches dipped to .292. Puig’s overall BABIP in 2013 was .382, but that was just in 104 games and proved to be too high to maintain over a full season in the majors as his BABIP went down to .356 and his AVG fell to .292. Puig’s competition also made an adjustment as he would see fewer breaking pitches in 2014 than he saw the year before when he hit .320 with a .409 BABIP and 11 home runs against breaking pitches in ‘13. 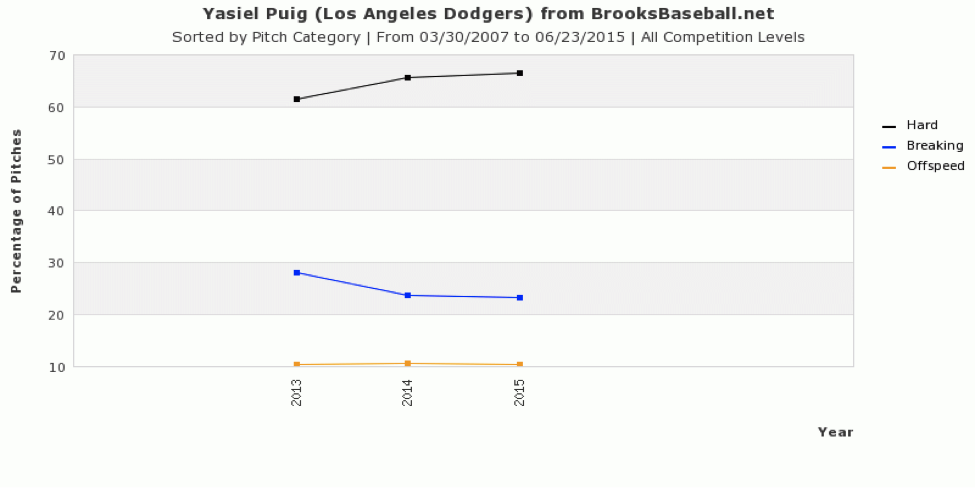 Puig’s average wasn’t the only area of his offensive game to take a slight hit in his sophomore campaign as his power dipped as well. In 2013, Puig benefitted from a 21 percent HR:FB rate on his way to hitting 19 home runs. It was unlikely that Puig would even come close to replicating that pace, and he hasn’t as in the 174 games he’s played since the beginning of 2014, with his HR:FB down to 11 percent. In that same time, his ISO has fallen to .180—which is still very good, by the way—from the .215 mark he posted in 2013.

While Puig saw some decline in two areas of importance to fantasy owners AVG and ISO after his spectacular debut season, he still essentially maintained his production from ’13. He traded a few home runs for doubles (37) and triples (9) and started walking more as his walk percentage was over 10 percent. Perhaps most important was that he was able to stay healthy throughout the season as he played a career-high 148 games. There was a lot of chatter around the game upon his arrival that Puig would have trouble staying healthy while playing the game with the reckless abandon befitting of someone nicknamed Wild Horse. Of course, there he was at the end of the year healthy enough to dive in the Diamondbacks outfield pool when the Dodgers clinched.

A hamstring injury earlier this season has limited Puig to playing in just 26 games, but he’s basically been the same guy we’ve come to know and love to watch play. He’s a supremely gifted hitter with some power, great speed, and a tremendous throwing arm—and he plays the game like his hair is on fire.

As you can see from Puig’s preseason PECOTA projection below, expectations were high as he was projected to eclipse the 20 home run mark for the first time in his career. He’ll have to blast 17 more homers in a little over three months the rest of the season to get there now. For the rest of the season, PECOTA is projecting Puig to hit 10 home runs.

While it could have something to do with Puig battling a hamstring injury earlier in the season, he hasn’t stolen a single base yet this year after stealing 11 in each of his first two seasons. PECOTA projected him to improve on that number before the season and still projects him to steal seven bases the rest of the way this year. Watching Puig run after hitting a ball in the gap is a thing of beauty as he’s an electric runner and he’ll likely still steal a handful bases before this season is over, but it’s worth noting that he has been thrown out quite a bit in his career already. He has 22 stolen bases to 17 times caught stealing in his career, showing that speed alone does not a great baserunner make. Still, he’s batting at the top of the order and should steal some bags eventually.

Puig is going to be a fascinating player to watch grow as a major league player. We’ve already seen him sort of come into his own in his first three seasons in the big leagues as he’s made adjustments at the plate and continues to show he’s a fabulous hitter. The scary part is that Puig is just in the middle of his age-24 season, so he’s yet to enter his real prime. He doesn’t have many areas to improve, but he could stand to learn how to actually steal a base without getting caught so often, which would likely give him more opportunities to run in general.

Puig’s contract runs through the 2018 season, but according to Cots Contracts he’ll be eligible for arbitration in 2019 before he hits the free agent market in 2020, when he’ll still not even be 30-years-old. There’s a lot of baseball to be played, though, before his contract runs out and he could make that far off arbitration date an absolute circus by then.

You need to be logged in to comment. Login or Subscribe
lipitorkid
Thanks for writing this up. Puig is my favorite player to watch in MLB, especially live. There is pretty much a play a game: at the plate, on the basepaths, or in the field, where he does something memorable. You get your money's worth when you buy a ticket to watch a Dodgers game.

I'm thinking of him as a better version of Jason Heyward.

I think an AVG of above .300 is sustainable, and with work I could see him getting in the conversation of a batting title. I think he has .400 OBP potential. I love him as a fixture in the 2 spot in this Dodgers lineup.

I'd say 90-95 Runs; 16-22 HRs; 75-80 RBIs; and 8-15 SBs is a good estimation of what he can produce in a healthy season. Maybe the other players we should be comparing him to are guys like Hunter Pence, Jason Werth, or a reduced version of David Wright in his prime. Maybe he won't be a superstar at the plate, but those comparisons, with his play in RF, make for a very nice MLB and fantasy asset.
Reply to lipitorkid